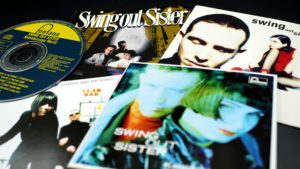 Our Top 10 Swing Out Sister songs list looks at a fabulous band formed in the UK in the mid 1980s. The band’s original founders of Andy Connell and Martin Jackson were later joined by Corinne Drewery. Connell was the keyboardist while Jackson was on drums and Drewery served as the group’s vocalist. The name, Swing Out Sister, was inspired by the 1945 movie of the same name. After signing up with Mercury Records, the then-trio officially began their recording career that saw the release of their debut album, It’s Better to Travel, which saw a success level that would remain as the group’s most successful. In the middle of recording their second album, Kaleidoscope World, Martin Jackson would leave the group, therefore now making it a duo-act featuring Connell and Drewery only at that time.

The full discographic portfolio of Swing Out Sister has so far seen ten studio albums, seven compilation albums, and two live albums. There are also twenty-three singles to their credit, some of which were released to the Japanese audience only. Still recording and touring today, neither Connell nor Drewery seem to have any interest to retire anytime soon.

“Fooled by a Smile” was the fifth and final single released from Swing Out Sister’s debut album, It’s Better to Travel, in 1987. It was also the final song that the group’s drummer, Martin Jackson would be credited for before his departure. On the UK Singles Chart, it peaked as nigh as number forty-three. The soft-pop sound that made the highly influential music of the 1980s what it was comes through as an easy-listening classic.

#9 – Somewhere in the World

In 1996, the second compilation album, Best of Swing Out Sister, produced the single, “Somewhere in the World,” and it peaked at number thirty on the US Billboard Adult Contemporary chart in 1997. It was the final song from the group that saw chart success on a major billboard. Despite the song coming out during the mid-1990s, the easy-listening tempo could have just as easily played during the late 1970s. The smooth playout of the song, from start to finish, features Drewery’s exceptional vocals as a melodic masterpiece.

On two occasions, “La La (Means I Love You) appeared on two albums. It’s the one and only single from Swing Out Sister’s fourth studio album, The Living Return, which was released in 1994. The second time it makes an album appearance is on the soundtrack of Four Weddings and a Funeral, a British comedy that was also released in 1994. The original version of this song was released by The Delfonics in 1968 and has been a cover song for a number of artists throughout the years. Drewery’s R&B delivery of this soft jazz mix of piano and saxophone adds a hint of disco fun to this easy listening piece.

Get in Touch with Yourself was the third studio album released by Swing Out Sister, which came out on May 4, 1992. Upon its release, the single, “Notgonnachange” charted as high as number twenty-two on the US Adult Contemporary chart and at number forty-nine on the UK Singles Chart. Shortly afterward, the song was remixed to suit the dance club scene by American DJ, Frankie Knuckles. It then peaked on the US Dance Club Songs chart at number twenty-one. Orchestral, rhythmic, and swingy, this song benefits from the soft melodic touch only Drewery’s vocals can give.

Released as a dance-themed pop-rock single only for the North American nations of the USA and Canada, “Waiting Game” came from the group’s second album, Kaleidoscope World in 1989. The highest chart rank it received was number six on the US Billboard Adult Contemporary Songs chart, followed by a number thirty-three rank on the US Billboard Dance Club Songs chart. In Canada, the song ranked at number forty-five on its Top Singles chart. On the US Billboard Hot 100, it charted at number eighty-six.

1989’s Kaleidoscope World was the second album Swing Out Sister produced. “You on My Mind” was the lead single that peaked on the UK Singles Chart at number twenty-eight. On the US Billboard Adult Contemporary chart, it ranked as high as number twenty-three. The sophistication of the song is credited to the influence it received from The Thomas Crown Affair, a 1968 cult classic film that starred Steve McQueen and Faye Dunaway.

Get in Touch with Yourself was Swing Out Sister’s third studio album, which was released on May 4, 1992. On the US Billboard Adult Contemporary chart, “Am I the Same Girl?” peaked at number one. On the US Billboard Hot 100, it charted at number forty-five. The UK Singles Chart saw the song chart as high as number twenty-one. This was a remake of the original version, which was first recorded by Barbara Acklin’s vocals in 1968, but it was removed in favor of a piano solo instead. At the timing of its release, it was titled Soulful Strut and was an instrumental music hit. Dusty Springfield also covered the song, which was in 1969, but Drewery’s soft jazz vocal performance was inspired by the original recording she heard that featured Acklin.

The jazzy, synth-heavy “Twilight World” was the fourth single released from the debut album, It’s Better to Travel, which charted in 1987. On the US Billboard charts, it peaked as high as number nine on the Adult Contemporary chart, at number nine on the Dance Club Songs chart, and at number thirty-one on the Hot 100. On the UK Singles Chart, Twilight World reached as high as number thirty-two.

In 1987, from the 1986 release of Swing Out Sister’s first studio album, It’s Better to Travel, was the hit single, “Surrender.” The chart performance it received impressive enough to break into the top ten of most the major charts. On the Irish Singles Chart, it peaked the highest at number three, followed by a number seven rank on the UK Singles Chart. While the song did not see a ranking on the US Billboard Hot 100, it did reach number twenty-two on US Billboard’s Dance Club Play chart. The start of the song began with a laugh by Drewery, which is later followed by a solo performance on the trumpet, played by jazz musician, John Thirkell.

The second single Swing Out Sister produced was “Breakout,” which was released in 1986 as their second track from the debut album, It’s Better to Travel. As a song best described as a mix of contemporary pop and jazz, Breakout was not only the highest-charting song the group ever produced but became a staple song featured at clubs and radio stations that cater to the genres of adult contemporary and smooth jazz hits. On the US Billboard Adult Contemporary chart the song peaked at number one while on the US Billboard 100, it charted at number six. The UK Singles Chart saw the song reach as high number four, which is the same number it charted on the Recorded Music of New Zealand.