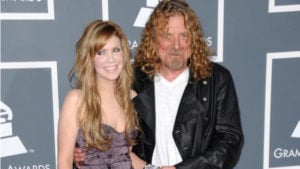 It may not have been Led Zeppelin at Madison Square Garden 1973, but just hearing that legendary voice of Robert Plant next to the gorgeous vocals of Alison Krauss singing live makes for a wonderful and joyful listen for any type of music fan. With the release of  Alison Krauss and Robert Plant’s new album Raise The Roof, the two brilliant singers are doing some promotion for both the album and their upcoming tour. Alison Krauss and Robert Plant performed three songs live from the Sound Emporium Studio located in Nashville Tennessee. The short studio concert was filmed and broadcast on NPR’s “Tiny Desk  show which is pretty much a Home Concert type series. The home concert shows that we have been watching by many artists over the past two years has been an outlet for so many musicians who have had to cancel shows and tours because of the pandemic.

Alison Krauss and Robert Plant performed three songs for the NPR Tiny Desk show. The duo opened with the classic song “Can’t Let Go.” Fans of Lucinda Williams will remember that one as she recorded the song for her classic Car Wheels on a Gravel Road album released in 1998. The song was written by Randy Weeks. The two artists then dived into a song first recorded by Bobby Moore & the Rhythm Aces entitled “Searching For My Love.” Robert Plant joked that he used to listen to the song back in 1963 and that he’s really glad the band Bobby Moore & the Rhythm Aces weren’t in the studio with them “to be better than we are.”

Just like the blues played such a huge influence in the work of Led Zeppelin, Robert Plant has continued to go back to the music of his youth over the past twenty years in inspiring his new recordings. Robert Plant sings lead on this remarkable version. It’s just stunning and must be heard. Alison Krauss’s backing vocals on the chorus just blend so well with Robert Plant’s tenor. It’s surprising these two have have only done two albums together. They just sound so great together.

The two closed the concert with Alison Krauss singing lead on the song “Trouble With My Lover.” This dark country soul tune is perfect for the  magical voice of Alison Krauss. Robert Plant’s whispering background vocals on the chorus will give you chills. Robert Plant and Alison Krauss are backed up in the studio by a remarkable cast of musicians who have definitely been around. They set a groove that is just perfectly balanced to add the perfect rhythm and soundscape while never overpowering the two main stars. Something not easy to do in such a small setting in a recording studio control room. Yet that’s pretty much the style of bluegrass music and performing in its most organic state.

The band in the studio included JD McPherson on guitar who is the only musician in the room who was not on the album. The group also included Stuart Duncan also played guitars, Dennis Crouch on a hug upright bass that laid such a tight foundation, Viktor Krauss also played bass and guitar and Jay Bellerose playing those covered drums with a brush in such an eloquent fashion.

At the end of the concert, Robert Plant thanks the audience and says “lots more around the corner coming to a town near you soon.” Fans will have to wait a few months for the live shows that don’t start until June 1st in New York. After a two week run in the United States that runs mostly on the Eastern and Midwestern States, Robert Plant and Alison Krauss will head across the Atlantic Ocean to do some shows in Europe. The two will cover a lot of ground on the European continent playing shows in London, Norway, Sweden, Germany, Poland and Italy.

Top 10 Catfish And The Bottlemen Songs