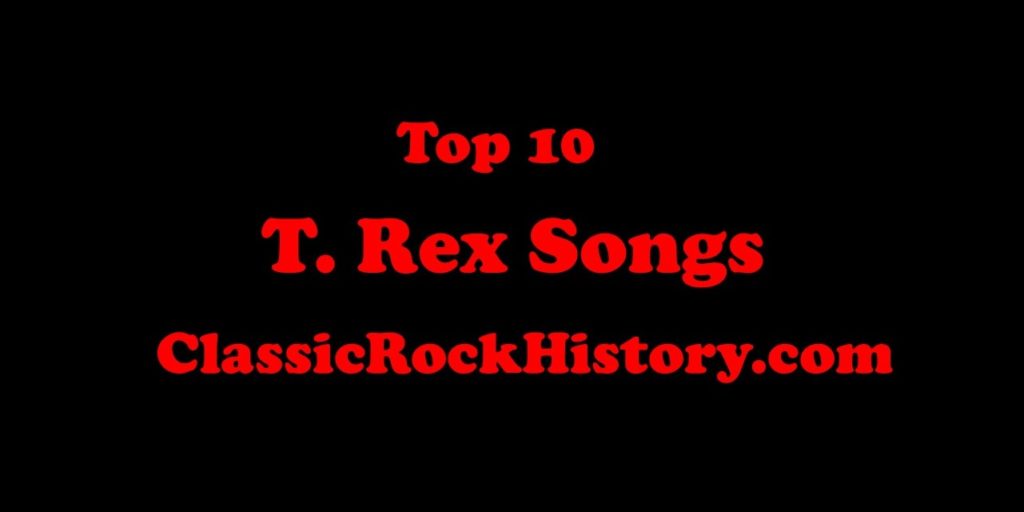 Our Top 10 T. Rex songs list looks back at one of the most important bands in classic rock history who also played a significant role in the birth of Glam Rock and more. T. Rex was a popular band on a worldwide basis. However, the group had most of its chart success in the United Kingdom where they celebrated multiple number one singles and four top 10 albums. The band also found  success in the United States based more on album sales than hits, with the exception of course of the song “Bang A Gong (Get It On),”which was a top 10 hit in the U.S. Yet, only one T. Rex album made the U.S Billboard top 100 albums charts. The great Electric Warrior album peaked at number thirty two on the Billboard Hot 100. The album hit number one in the U.K. Still the legacy of the band is undeniable as they have inspired countless legions of rock and roll artists over the past four decades in all countries that celebrate rock and roll music.

The first album to be released under the T. Rex name was issued in 1970 simply titled T. Rex. However, this was basically the same lineup as the last record with Marc Bolan and Mickey Finn. Additionally, there was a guest appearance by Flo and Eddie on the record. One year later in 1971, the band T.Rex and Marc Bolan became a household name with the release of the spectacular Electric Warrior album. Joining the band on that record was Steve Currie on bass and Bill Legend on drums. The album also featured guest appearances by Rick Wakeman of Yes, Ian McDonald of King Crimson, jazz musician Burt Collins, and once again Flo & Eddie.

The Electric Warrior album was followed up a year later with an album entitled The Slider. The legendary album cover that remains one of classic rock’s most iconic covers was photographed by Ringo Starr. This was another spectacular T. Rex record that contained some of the most famous T. Rex songs with tracks such as “Metal Guru,” and “Telegram Sam.” With the same lineup as the previous two albums T. Rex returned in 1973 with an album that veered more towards soul than glam called Tanx. The next record wound up not being released in the U.S. for various reasons. Entitled Zinc Alloy and the Hidden Riders of Tomorrow, it was the first T. Rex album to be credited as Marc Bolan and T. Rex.  In the U.S, an album entitled Light of Love  was released instead.

Marc Bolan and his band T. Rex and Tyrannosaurus Rex had released twelve studio albums between the years 1968 and 1977. There were also many T. Rex songs released as singles that were non album tracks. After Marc Bolan’s passing there was an incredible amount of records released containing unreleased tracks, live recordings and compilations. Marc Bolan and T. Rex left behind a legacy of songs that have inspired so many. Our top 10 T.Rex songs list is just a small sampling of some of T. Rex’s most popular songs, some fan favorites and some deep album tracks. Of course there are so many missing. Songs such as “Life’s A Gas, Mambo Sun, 20th Century Boy, Baby Strange, Ride a White Swan, Telegram Sam, Spaceball Ricochet,” and so many more deserved to be on this list. However, with only picking ten we had to make some tough choices. In the end, we hope this lists fuels your desire to check out the rest of the band’s catalog and start enjoying the great music of Marc Bolan and T. Rex.

The song was written by Marc Bolan. The song’s brilliant production was produced by Tony Visconti.  Interestingly, the band The Power Station with Robert Palmer as their lead vocalist recorded the song fourteen years later in 1985 and had just a bit better chart success with the song than T.Rex originally had. Released as “Get It On (Bang A Gong ),” the Power Station’s version hit number nine on the Billboard Hit 100; one spot higher than the original version did.

In the end, Bang A Gong will always be considered a T.Rex song as opposed to a Power Station song and stands pretty much as Marc Bolan’s signature song. Its influence on rock and roll is almost immeasurable.

While “Cosmic Dancer,” was never released as a single or even a b side, it remains one of our favorite T. Rex songs of all time. This is one of those great deep album tracks that has always been a fan favorite of hardcore T.Rex fans. This one is just so smooth with such deep meaning. Listen to those strings soar over that haunting and yet beautiful vocal line. The ending is chilling. The song “Cosmic Dancer,” was released on the T.Rex album Electric Warrior.

As we continue our top 10 T.Rex songs we turn back to a time when the group went by the name Tyrannosaurus Rex.  “Do You Remember,” was the b-side to the non-album single “King Of The Rumbling Spires.” The song was released in 1969. The 1960s and 70s were filled with great b sides that often got lost among the big hits. “Do You Remember,” was one of them.

With the number six position on this top 10 T. Rex songs list we turn to the title track of the great album The Slider. After the tremendous success of the Electric Warrior  album, fans were anxiously awaiting to see what the band would come up with next. They weren’t disappointed as The Slider album was another great T.Rex record.  The album’s title track that is featured here had such an addicting slow groove with those great glam flourishes that hit you in the face at different points, it was almost too good to take. Love this one.

While we wanted to cover as many aspects of the career of T. Rex as space would allow, there was no way we were going to leave this great T.Rex song of this list. “Jeepster,” was one of the best songs released on the band’s best album Electric Warrior. The song served as the follow up single to “Get It On.” “Jeepester,” hit number two on the U.K. music charts in 1971. It failed to even break the top 100 in the U.S.

The classic T.Rex song “Metal Guru,” was the band’s fourth number one single in the United Kingdom and Ireland. It was the second single released from the album The Slider. This was an incredibly addicting song that showcased the glam aspect of the music of T. Rex almost more than any of their other songs. The lead vocal and the backing vocals on the song “Metal Guru,” are stunning. One of the great rock and roll sing along songs of the 1970s.

When I first purchased the single “Bang A Gong,” I found myself playing the B-side more often than the A side. I don’t think I was alone. I also found myself thinking abut the girl that Mar Bolan was singing abut. I was pretty young. That’s Rock and Roll.

# 1 – Children Of The Revolution

We close out our our top 10 T. Rex Songs list with the great track “Children of the Revolution.” This great song was released in 1970. The song was recorded for the motion picture film Born To Boogie. This track also featured Elton John on piano and Ringo Starr on drums. The song hit number two on the Billboard Hot 100. The song “Children of the Revolution.” was released on various compilations and the DVD of the concert film. It was not released on any of the original T. Rex albums.

Prophets, Seers & Sages: The Angels of the Ages

A Beard of Stars

Zinc Alloy and the Hidden Riders of Tomorrow

Dandy in the Underworld