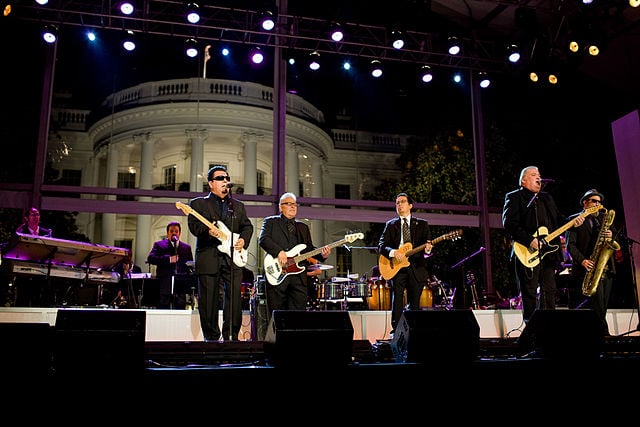 Our Top 10 Los Lobos songs list looks at a California rock band that just may be the most underrated rock band in classic rock history. Of course. there are many bands that we feel that way about. However, when you look back at the catalog that Los Lobos has released, it’s quite impressive. Not only have they released an abundance of critically acclaimed studio albums, they have contributed many non-studio albums tracks to multiple television and motion picture soundtracks. They have also appeared on many tribute albums. Over time, Los Lobos have become as well known for their cover versions of classic songs as well as their acclaimed original songs.

It was tough to choose only ten Los Lobos songs to include on this list. There are just so many great recordings to choose from. The band has so far released sixteen studio albums between the years 1978 and 2019. And of course. there are all the soundtrack songs and appearances on tribute albums and more. We have attempted to present a wide selection of songs from the many different time periods and outlets that Los Lobos has released music. We think you will be pretty impressed with how great this band is and want look to dig deeper into their fabulous catalog.

We open up our 10 Los Lobos songs list with the great track “Don’t Worry Baby.” The song was released on Los Lobos’ first major label album entitled How Will the Wolf Survive? The album was released in 1984. The song Don’t Worry Baby was the opening track on the album. This thing rocks hard. The perfect way to open up our top 10 Los Lobos songs list. In the band at the time was Cesar Rojas on vocals, Louie Perez on vocals and drums, Conrad Lozano on vocals and bass, David Hidalgo on lead vocals and guitar and Steve Burling on saxophone.

When you are top 10 Los Lobos songs list with a Deep album track. The song The Neighborhood was released on the album of the same title in 1990. “The Neighborhood,” was the closing track on the album. The song was written by David K Hidalgo and Louis F Perez Jr. Jim Keltner played percussion on the track. The album featured contributions from legendary artists such as John Hiatt and The Band’s Levon Helm.

If ever there was a song that we really enjoyed presenting on the top to Los Lobos songs list, it’s this great one called “Viking.” The song was released on the band’s album entitled This time. The album was released in 1999. It was the band ninth studio album. This one is very heavy and if you heard it on the radio, or at your friend’s house, or down in the garage or anywhere else, the last thing you would have thought was that this was Los Lobos. That’s how different this band sounds on so many of their various albums

Everyone knows that “Bertha,” is a Grateful Dead song. Not many know that Los Lobos did an amazing cover version of this legendary classic Grateful Dead song. This version was released on a tribute album to the Grateful Dead’s longtime leader Jerry Garcia. However Los Lobos has recorded the song many times as it has appeared on many different records.

Continuing with our top 10 Los Lobos songs list we present once again another unknown track. that is just simply killer. The song Reva’s House was released on the album Kiko. The album was released in 1992. Outside of the La Bamba soundtrack The Kiko album is the band’s biggest selling album of their career. There are many Los Lobos albums that we would recommend. but this one is all the way up at the top. Listen to them rip it up on this song.

At the halfway point on our Top 10 Los Lobos songs list we turn to the song “One Time, One Night.” The song was released on the album By the Light of the Moon. This is the band’s third album release. It was released in the same year that the La Bamba soundtrack was issued in 1987. The album was produced by T-Bone Burnett.

Don Sugarcane Harris’s song “Farmer John,” has been covered by many artists such as Neil Young, The Matadors, Tidal Waves and in 1963 The Searchers. Los Lobos puts their own spin on this great song from the record Live at The Ritz New York City 1987. Lobos delivered a fast swinging version for the crowd in New York in 1987

Ask any Los Lobos fan to choose their favorite Los Lobos song, and nine times out of 10 they will choose “Will The Wolf Survive.” Los Lobos released this song on their major label debut album entitled How Will the Wolf Survive. It was placed as the closing song on the album. This dynamic, brilliant, original composition defined not just how great a band of musicians Los Lobos were, but how brilliant they were, and still are, at songwriting

There was never any doubt as to what song would hit number one on our top 10 Los Lobos songs list. Los Lobos version of Ritchie Valens “La Bamba,” was one of the biggest hit records released in 1987. A Los Lobos version released in 1987 on the La Bamba soundtrack went straight to number one in the United States. The song also hit number one in the United Kingdom, Switzerland, New Zealand, Ireland, France, Mexico, Canada and Australia. That’s a pretty successful record. The song completely infiltrated pop culture over the next couple of years. One could never go to a wedding or party without hearing the Los Lobos version of “La Bamba,” It was a big-time party dance song for a long time afterwards. Still pretty much is.