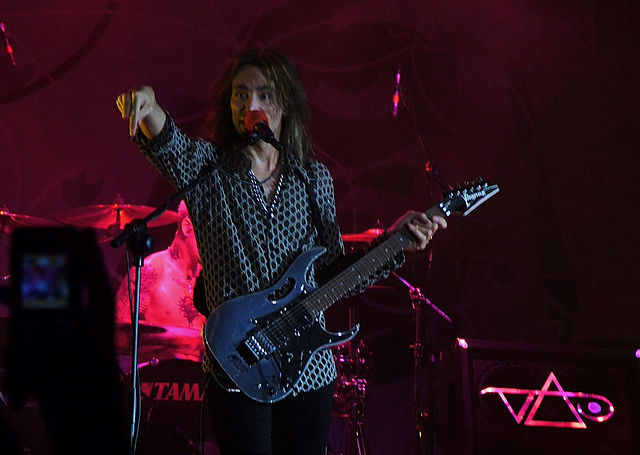 For many, this title will make absolutely no sense. However, the truth is that the Karate Kid (Ralph Macchio) did fight Steve Vai in a guitar battle on stage in the motion picture Crossroads. He may not have been in his Karate Kid character, but don’t we all call Ralph Macchio The Karate Kid and not Ralph Macchio?  Now of course, we all know it wasn’t actually Ralph Macchio playing guitar in the film, but the scene in which Steve Vai battles Ralph Macchio who plays the character Eugene Martone in the film Crossroads stands as one of the most entertaining videos you will ever see. And its all because of Steve Vai. In the film, Steve Vai plays the character Jack Butler. Vai’s character had sold his soul to the devil in order to play guitar like a God. Macchio’s character Martone had made a deal with the devil that if he beat Jack Butler in a guitar duel, his friend Willie would get his soul back. Of course, if he loses, Martone’s soul would also belong to the devil.  The video below presents the films epic guitar duel between Martone (Macchio) and Jack Butler( Steve Vai)

In reality, of course, it is Steve Vai versues Ry Cooder in the battle. The playing is brilliant, incredibly creative and a joy to listen too. However, what makes this video so much fun to watch is Steve Vai’s expressions. The man knows how to play a villain. And an incredibly interesting one at that. Steve Vai on many levels is just playing Steve Vai as he usually looks on stage. Yet, it’s those sneers he throws at Ralph Macchio that just kill. Macchio wears the same expression in the scenes in the film that he did in the Karate Kid. That innocent scared look that explodes into confidence as he then indeed goes in for he kill. It is a bit comical watching Macchio duel Steve Vai on stage. But in the end, we all know it’s Steve Vai vs Ry Cooder

The scene is filmed wonderfully. The lighting is perfect, the costumes dazzling and the band is smoking. The film took a bit of criticism when it first came out, but this scene that appears late in the film is one for the ages. Once you begin watching the video, you will not be able to stop until you get to the end.

The film Crossroads was released in 1986. The film was written by a musician named John Fusco. The story was somewhat based on the legend of the Crossroads, the Devil and Robert Johnson. In reality, the music of Robert Johnson stands as one of the building blocks of rock and roll as he is one of the earliest blues musicians that we actually have recordings of.  We highly recommend you tale a look at our article The Story of Classic Rock as we dig deep into the history of Robert Johnson and the birth of rock and roll. Nonetheless, the writer of the film John Fusco composed his draft for the film while he was attending New York University. After winning a major nationwide student film award, Columbia Pictures brought the script from John Fusco. The film was then directed by Walter Hill who had previously directed such films as The Warriors, both 48 Hours films, Red Heat, Southern Comfort and a few others.

Ralph Macchio was one of Hollywood’s biggest stars at the time. The native Long Islander had scored big time with his Karate Kid film and its eventual sequels. Many argued he was miscast as a blues musician. But as always, Ralph Macchio was great in the film. The man knew how to play a character that everyone would root for.

When the film opened in March of 1986, Steve Vai who is another Long Island, New York native was not as well known as he is today. Frank Zappa fans were well aware of the work that Steve Vai had recorded on multiple Frank Zappa albums and live shows. Fans of the band Alcatrazz were also well aware of Steve Vai who had replaced Yngwie Malmsteen in the band in 1984. Many of them would become big Steve Vai fans purchasing the guitarists early albums like Flexible. The man had a following, but it was nowhere near the rock star status he would achieve five months after the film Crossroads was released when Steve Vai became the guitarist in the David Lee Roth Band.

The David Lee Roth Band’s first album Eat ‘Em and Smile was released in July of 1986. David Lee Roth had picked the perfect guitarist to work with that could compete with the man he left behind in Eddie Van Halen. Steve Vai’s popularity would soar while being a member of the David Lee Roth Band. He left the group after only two albums. He has become one of of the most respected and creative guitarists in classic rock history. However, at that one moment in time when he played Jack Butler in Crossroads, and was challenged by our beloved Karate Kid, Steve Vai’s extraordinary talent lit up the stage and silver screen in one of cinema’s most enjoyable moments.