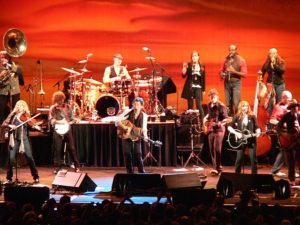 When Bruce Springsteen became a big star in the 1970s, it seemed that he purposely led a very private life for various reasons. Even now it seems he still leads a private life. He was never your David Lee Roth type looking to be seen on the front page of every magazine with his shirt off and beautiful girls surrounding him. No, Bruce Springsteen was pretty much just your average typical regular type guy who actually worked hard on keeping that image and persona. It was an image that fueled the heart and soul of many of his songs. The blue-collar jersey guy from Asbury Park, who was really from Freehold. Oh we love Bruce Springsteen here a classicrockhistory.com. We think he’s one of the most genuine artists of all time and one of the greatest performers that has ever lived. We have read and written a lot about Bruce Springsteen over the years and knew a guy who knew a guy who knew a guy you know……. Anyways here’s 10 Things You Didn’t Know About Bruce Springsteen……

While it’s obvious that any young songwriter who grew up in the 60s as a teenager would be influenced by Bob Dylan there were many critics who unfairly panned Bruce Springsteen for sounding way too much like Bob Dylan on his first album. What Bruce Springsteen was actually  trying to do was write the greatest and most out there lyrics known to man to blow away any sort of record company personal he could get to listen to him, and then carry it over to the album to gain everyone’s attention in the music business. Some of the greatest songs he ever released would land on that album like “Lost In The Flood,” “Blinded By The Light,” “Spirit In The Night,” and “Growing Up.”

Bruce Springsteen was one of those artists that did not release a lot of music early on in his career. He was not like an Elton John who would release a new album every six months and singles in between. Bruce Springsteen took years in between records. Of course his point was that he wanted to record albums that were well defined and generated a certain sound and feel that would fuel the entire record. Fans just wanted to hear new music.

# 4 – Springsteen Hated Born To Run just before he released it.

When Bruce Springsteen was in the studio recording “Born To Run,” he spent take after take after take just trying to get it to sound the way he wanted to. He was trying to create the perfect sound, the perfect record that was inspired by the voice and music of a Roy Orbison and Van Morrison surrounded by the style of  Phil Spector’s Wall Of Sound. When everyone had thought they had the perfect take and mix and the record company was getting ready to release the record, Bruce Springsteen tried stopping its release, saying he hated how it sounded. His producer and friend at the time Jon Landau, looked him hard in the face and said “look your not supposed to like it. They released Born To Run and Bruce Springsteen would become one of the biggest rock stars of all time.

# 5 – USA Today Asked If Bruce Was Bigger Than Elvis

In the 1980s, hardcore Bruce Springsteen fans who could never get enough of the boss would flock to record stores as soon as Bruce Springsteen would release a new single from an album. These singles from The River album on, would contain great B-sides of songs that had never been released before. This practice did not begin until the release of the single “Hungry Heart,” from The River album which contained the B-Side “Held Up Without A Gun.” None of Bruce Springsteen’s 1970s singles contained any non-album tracks.

# 8 – Set up Food Banks outside concerts.

Bruce Springsteen has always been one of the most charitable musicians and songwriters in rock ‘n’ roll history. During Bruce Springsteen’s Born In The USA tour he had set up local food banks inside and outside the arenas and stadiums he was performing. Instead of just using one national charity, he made sure to focus on the local communities so that the food and other charitable items would go straight to the people who needed it most in the cities and states that he was performing in.

# 9 – Turned Down Millions From Chrysler

If you’re someone younger who is just getting into Bruce Springsteen, chances are you’re just listening to downloads and never ever reading credits anymore. However, if you have the vinyl or the cd, all you have to do is check out the credits on the record and you’ll find out that the Brecker Brothers who were one of the most legendary brother acts of the 1970s and 80s in the jazz world play the horns on Bruce Springsteen’s legendary’s cut “Tenth Avenue Freeze Out.” Randy Brecker also played the trumpet solo on “Meeting Across The River.” These were big time names in the music business back then that Bruce Springsteen had gotten to record with him.