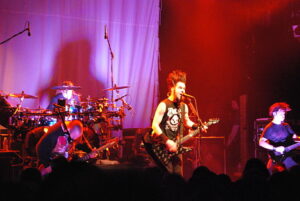 Our top 10 Static-X songs list looks at the body of work of an American band best known for its fusion of industrial metal, nu-metal, and alternative metal sound. The band’s formation and success are highly credited to the late Wayne Static. Before the band’s formation, Wayne Static was a member of an ‘80s band under the moniker Deep Blue Dream. However, the band disbanded after its member Billy Corgan concentrated on his up-and-coming alternative rock band, The Smashing Pumpkins.

Wayne Static teamed up with Ken Jay to form a band under the name Drill. Lineup changes happened, prompting the band to rebrand to Static but eventually settled for the moniker Static-X. This happened during the band’s recording of its debut album, where its members realized the presence of several ensembles using the moniker Static.

“Push It,” “Bled for Days,” “Love Dump,” and “I’m with Stupid” are some of the best Static-X songs from the band’s debut album. Wisconsin Death Trip was Platinum-certified in the US by RIAA, marking a great commercial start for the band. Static-X would soon after feature on the second stage of 1999 Ozzfest, sharing the stage with Fear Factory, Apartment 26, Pushmonkey, and Slipknot.

Static-X’s Album Releases over the Years

Later in 2001, the band released its sophomore album, Machine. Machine’s success was built upon the influence of the band’s critically acclaimed and commercially successful debut album. The album went on to rise to the eleventh spot on the Billboard 200. It also peaked at number fifty-six on the UK Albums chart. While Machine outperformed Wisconsin Death Trip on the charts, it failed to match the band’s debut album’s commercial success. Nevertheless, the album managed a Gold-certification in the US. “Black and White,” “This is Not,” and “Cold” are some of the most popular songs by Static-X from Machine.

Static-X went on to release its third studio album, Shadow Zone, in 2003. Shadow Zone peaked at number twenty on the Billboard 200. It also managed to rise to number one hundred and thirteen on the UK Albums chart. However, the album failed to replicate the commercial feats achieved by the band’s previous albums. “The Only” and “So” are some of the biggest songs by Static-X from the album.

In 2005, Static-X issued its fourth studio album, Start a War. Start a War was also a success, peaking at number twenty-nine on the Billboard 200. Once more, the album sales for Start a War took a dip in comparison to the band’s previous releases. The constant commercial success decline saw Static-X cut ties with Warner Bros. Records. Start a War is home to some of the best Static-X songs, including “I’m the One” and “Dirthouse.”

After cutting ties with Warner Bros. Records, Static-X signed a recording contract with Reprise Records, home to Deftones, Eric Clapton, Neil Young, Disturbed, and Stevie Nicks. Static-X released the album, Cannibal in 2007. Cannibal went on to peak at number thirty-six on the Billboard 200. While the album performed poorer than Start a War on the charts, it performed better commercially. “Destroyer” and “Cannibal: are some of the biggest songs by Static-X from the album.

In 2009, the band released its sixth studio album, Cult of Static. The album peaked at number sixteen on the Billboard 200. However, album sales for Cult of Static dropped significantly. “Stingwray,” “Z28,” and “Terminal” are some of the best Static-X songs from the album. Dark days were looming for the band, especially after its Australian tour. Static-X disbanded in 2010, with Campos joining Soulfly. Wayne Static went on to start a side project releasing Pighammer in 2011. Unfortunately, Wayne Static met his death in 2014, even before Static-X resumed the metal scene with a full lineup.

Later in 2018, the band’s original members, Ken Jay, Tony Campos, and Koichi Fukuda, reunited with a mission to rejuvenate Static-X’s musical pursuits. In July 2020, the band released its seventh LP, Project: Regeneration Vol. 1. The album achieved mild success, making it to number forty-eight on the Billboard 200. “Hollow (Project Regeneration),” “All These Years,” and “Dead Souls” are some of the best Static-X songs from the album.

Static-X’s Other Musical Pursuits and Legacy

Static-X also released a single EP entitled The Death Trip Continues in 2000. The EP followed after the success of the band’s debut album. Static-X has also featured on several soundtracks and compilation albums, including the 2000 MTV The Return of the Rock. The band remains one of the most sought-after American industrial metal acts of all time. Static-X’s music sound was highly influenced by ‘80s bands like Ministry, Pantera, The Prodigy, and The Chemical Brothers. Here we present ten fan-favorite songs by Static-X.

Opening our top 10 Static-X songs list is the ravishing hit “Dirthouse.” The song is featured on the band’s fourth studio album, Start a War. One of the biggest highlights of the song “Dirthouse” is Nick Oshiro’s magnificent drumming skills. We cannot forget Wayne Static’s outstanding vocal delivery, which is by far one of the pillars of the band’s success. “Dirthouse” went on to peak at number twenty-seven on the Billboard Hot Mainstream Rock Tracks chart.

“Stingwray” is one of the band’s biggest songs from its sixth studio album. The song was availed for the band’s fans in February 2009 on Static-X’s MySpace page. While Wayne Static is the primary songwriter for most of the band’s songs, he is joined by bassist Tonny Campos in penning the lyrics of “Stingwray.” This song managed to become a fan-favorite thanks to its infectious fast-paced tune. “Stingwray” is among the last songs Wayne Static released before he died several years after the band’s first disbandment. The song peaked at number forty on the US Active Rock chart.

Coming in at number eight is the dazzling hit “Bled for Days.” The song is featured on the band’s debut album, Wisconsin Death Trip. “Bled for Days” has been cited to be alluding to the loss of energy, having it refer to themes of exhaustion and emotional clampdown. The song also features themes of anger which follows facing the same monsters in life repeatedly.

“Bled for Days” has quite a great beautiful history for Nick Oshiro, having it played for him during the auditions for a drummer role towards the band’s LP, Start a War. “Bled for Days” peaked at number thirty-six on the Billboard Mainstream Rock Tracks chart.

The song also rose to the fourth spot on the UK Rock & Metal chart. In the US, “Black and White” achieved mild success, peaking at number thirty-five on the Billboard Mainstream Rock chart. Its music video was directed by Len Wiseman, who has also worked with other artists, including Megadeth and En Vogue.

Number six on our top 10 Static-X songs list is the tremendous hit “I’m the One.” The song serves as the lead track to the band’s fourth studio album, Start a War. “I’m the One” is a blend of the band’s usual industrial metal sound with nu-metal elements. The song’s video is directed by P.R. Brown. Brown has directed music videos for other artists, including Bullet for My Valentine, Evanescence, Audioslave, The Smashing Pumpkins, Avenged Sevenfold, and Slipknot. “I’m the One” rose to number twenty-two on the Billboard Mainstream Rock chart.

The band’s sophomore album, Machine, was quite a reputable release, becoming the band’s highest-charting album on the Billboard 200. Of course, this had to do with the quality of songs released on the album. “Cold” is yet another magical release from Machine. The song’s sonic influences balance industrial metal and nu-metal.

“Cold” has its music video pay tribute to the 1954 post-apocalyptic book I Am Legend by Richard Matheson. The music video was directed by turntablist Joe Hahn of the rock band Linkin Park and Nathan Cox. “Cold” rose to a peak position of number twenty-nine on the Billboard Hot Mainstream Rock Tracks chart. The song’s alternative version is featured on the soundtrack of the 2002 vampire film Queen of the Damned.

“I’m with Stupid” is a musical gem from the band’s debut album, Wisconsin Death Trip. The song features Linda Quigley’s dialogues in the 1988 comedy horror movie The Imp. “I’m with Stupid” is among the band’s most successful releases of 2000. The song made it to number thirty-eight on the Billboard Mainstream Rock chart. Its music video was directed by the Grammy Award-winning director Dave Meyers who has worked with Missy Elliot, Pink, OutKast, and Ariana Grande.

The third spot of our ten best Static-X songs goes to the terrific hit “Destroyer.” “Destroyer” is the most popular song by Static-X from the band’s fifth studio album, Cannibal. Thanks to its raging power, the song made the cut for us in a commercial for the video game WWE SmackDown vs. Raw 2008. “Destroyer” peaked at number twenty-three on the Billboard Hot Mainstream Rock Tracks chart.

While Shadow Zone might have been a commercial failure compared to the band’s debut and sophomore album, it featured several fan-favorite tracks, including “The Only.” The song was penned by Wayne Static, Tripp Eisen, and Ken Jay. This fan-favorite was voted to have featured Static-X’s best music video (directed by P.R. Brown) in 2014 in Billboard magazine.

“The Only” is featured on the soundtrack of several video games, including Need for Speed: Underground. The song peaked at number twenty-two on the Billboard Hot Mainstream Rock Tracks chart.

Number one on our top 10 Static-X songs list is the striking hit “Push It.” The song is featured on the band’s most commercially successful LP, Wisconsin Death Trip. “Push It” is a concert favorite for the band, having it played in the Ozzfest 2000. The band shared the main stage with other reputable artists, including Pantera, Ozzy Osbourne, P.O.D., Incubus, Godsmack, and Methods of Mayhem. 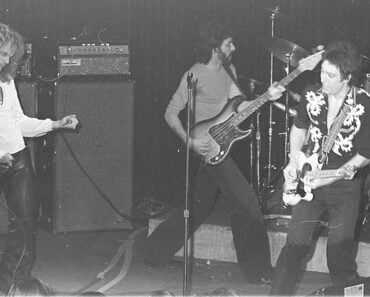 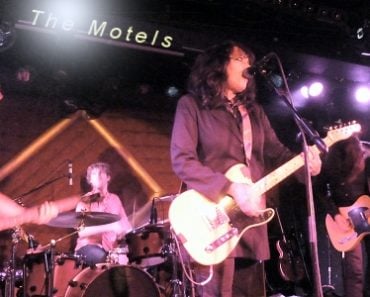 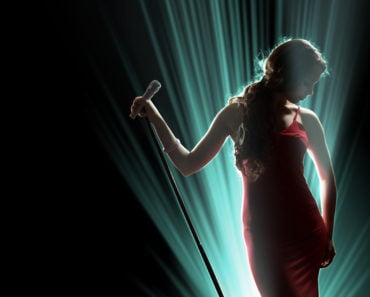 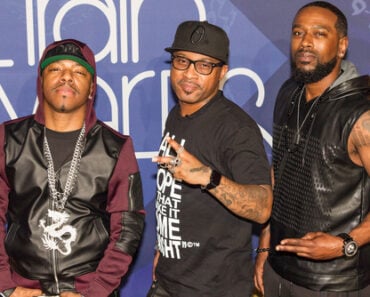 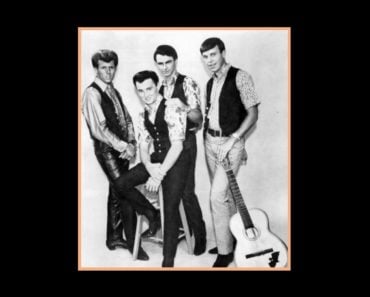