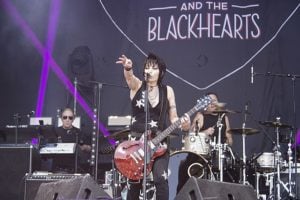 Joan Jett was born Joan Marie Larkin on September 22, 1958, in Wynnewood, Pennsylvania. She began playing drums and guitar at a young age and, after graduating from high school, moved to New York City with The Runaways, who became an influential, pioneering all-female rock band. After The Runaways broke up in 1979, Joan Jett developed a solo career that saw her become one of the first successful female rockers as part of the Third Wave feminist movement. Here are the 10 Things You Didn’t Know About Joan Jett that might be interesting to you:

Joan Jett was born Joan Marie Larkin on September 22, 1958, in Wynnewood, Pennsylvania. Her father worked as an engineer, and her mother worked as a teacher. The family moved around quite a bit during Jett’s childhood, but they always lived near Philadelphia. Growing up, she didn’t have many friends, so she spent much of her time with the nearby children. These children looked up to her because she enjoyed playing with them and doing boyish things like climbing trees and riding bikes. Joan Jett has been described as a “tomboy” by those who knew her growing up.

Joan Jett was nine years old when she began playing drums and guitar. She taught herself how to play by studying The Rolling Stones album, “Let it Bleed,” and soon learned to play songs like “Honky Tonk Women” and “Satisfaction.” When Joan Jett turned 13, her parents bought an organ for their church, which prompted them to sell her drum set. This helped fund the purchase of a new drum kit that made up for lost quality.

By the time she was 15, Joan Jett no longer felt like she belonged at home with her family. Her older sister Stephanie struggled with mental illness and often acted erratically, demanding that her parents spend time with her and take care of her. Further, Stephanie would often get into trouble doing dangerous things like riding motorcycles and climbing tall buildings. These issues forced Joan Jett to become more independent at a young age, and she decided to move out of the house when she was 15.

After moving out of her family home, Joan Jett moved to New York City and formed The Runaways in 1975. The band recorded five albums together before they broke up in 1979, largely due to artistic differences between band members and drug addictions within the group. Soon after, Joan Jett began recording on her own; however, it wasn’t until 1982 that she released her first solo song, “I Love Rock and Roll.” This iconic and timeless song was a worldwide hit and helped launch Joan Jett’s career as a successful solo rocker.

Despite the success of her debut album in 1983, Joan Jett initially had no interest in releasing “I Love Rock’ n’ Roll.” To be exact, she hated every second of the recording process. It took some convincing from producer Kenny Laguna to convince her that this catchy tune would be a great addition to the album. The gamble paid off for Laguna and Joan Jett because it became their first single to top the charts.

One of Joan Jett’s biggest career regrets is that she didn’t get the chance to tour behind her first album properly. The problem wasn’t that there wasn’t interest, but rather that it took so long for her record company to put out the material. She saw this unnecessary holdup as a symptom of something seriously wrong with how major labels operate, so she decided to create Blackheart Records in 1980. This label gave many up-and-coming bands their first big break and helped launch careers for groups like L7, Kitty, The Muffs, and Lunachicks.

# 7 – Her stage name came from a Muddy Waters song

Joan Jett took the stage name “Joan Jett” from a Muddy Waters song called “Bad Reputation.” It was suggested to her by drummer Sandy West, who thought it would fit well with the edgier punk rock sound she had been working on. She chose this particular moniker because it fit with what she saw as a rebellious nature of hers. So many people already knew her as “Joanie,” which some members of The Runaways called her.

# 8 – Her first gig was opening for The Rolling Stones

In 1975, Joan Jett got to live out one of her biggest dreams: opening for The Rolling Stones. This also happened to be the first concert she ever went to. The Runaways got the opportunity to open for The Rolling Stones when they were in Los Angeles, and Jett was elated at the chance. She still has fond memories of this time and noted in her memoir, “All I remember is we couldn’t hear ourselves, and we didn’t know how to move on stage.”

Though she didn’t write it herself, Joan Jett’s all-time favorite song is “Crimson and Clover” by Tommy James. After their first album came out, The Runaways had a show in Ohio where they opened for Tommy James & The Shondells. He turned down an offer to join the band, but Joan Jett noticed that he had a guitar with “Crimson and Clover” scribbled on it. She said in her memoir that she was stunned by how good the song was and hoped to check out more of his stuff someday.

# 10 – She is an outspoken advocate for women’s issues

Though Joan Jett has been quiet about her political stances in recent years, she has never shied away from letting people know where she stands on certain issues. One of these topics is particularly close to her heart: feminism. When people have told her that they don’t view The Runaways as a feminist band, she disagrees because “we weren’t trying to be sexy or provocative at all.” She also feels that the group was “anti-prettiness” and notes how it might have been hard for people at the time to view them as a feminist band because they just didn’t fit into any of the stereotypes.

Joan Jett is a rock and roll legend, but did you know that she also has an impressive list of achievements outside the music industry? From her collaborations with other musicians like Iggy Pop to acting in films like Light of Day and Blackhearts, it’s clear this woman does not limit herself. You may be surprised by what you don’t know about Joan Jett.