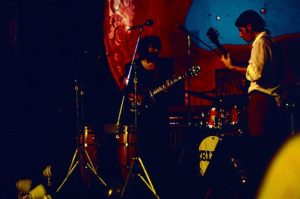 Deadheads, cover your ears now. There’s an elephant in the room, and the sooner we address it, the sooner we can all move on with our lives. The Grateful Dead were never the best band in the world. Sometimes, they weren’t even the best band in the room. When they hit the Festival Express with Janis Joplin and The Band in 1970, they were practically the weakest link. In the recording studio anyway. But here’s the thing. You don’t have to be dynamite in the studio to be dynamite on the stage. And on stage, the Dead were the bomb. When they locked and loaded onto one of their legendary jams, no one could touch them. It didn’t always come across on tape, but it didn’t have to – their fans knew which side their bread was buttered on, and the Grateful Dead buttered it every single time they decided to stretch a three-minute standard into a 30-minute hootenanny. Even when Jerry Garcia was so far gone he could barely hold a mic, let alone sing into one, they were epic. There’s never been a band like them. Failing some kind of divine intervention, there never will be again. But that’s ok. They may be gone, but their legacy remains in the shape of these top 10 Grateful Dead songs of all time.

In fairness, “Touch of Grey” should probably occupy a higher place on our list of Grateful Dead songs than it does. It’s an excellent song, and one that managed to survive ubiquity with its charms intact. The problem with “Touch of Grey” is simple. Too many people liked it. Whereas once you could judge the mettle of a man by his record collection, suddenly, the whole world and his wife had a copy of In the Dark and were claiming to be Deadheads. For people who’d followed the band through thick and thin for years, it rankled. It still does. But spite aside, it’s a classic tune, and an excellent way to kick off our list.

If anyone tells you the Grateful Dead were all about peace and love and flowers and such like, give them a blast of “Fire on the Mountain.” Jerry Garcia’s iridescent guitar playing might be as lovely and sunny as ever, but the lyrics (“Almost ablaze still you don’t feel the heat / It takes all you got just to stay on the beat / You say it’s a living, we all gotta eat / But you’re here alone, there’s no one to compete”) are diabolical. It’s pop, kids, but not as we know it.

Garcia couldn’t resist a lot of things, much to his own misfortune. Robert Hunter, by comparison, was a lot more Methodist in his tastes, but even he couldn’t resist the allure of a no-count gambler. He reveled in their misfortunes and delighted in their delusions, writing about their losses with more glee than was strictly speaking decent. On “Loser,” we meet another one of his deadbeats, a no-good gambler with his head in the clouds and his eyes on the prize. It’s not a prize he’s ever going to win, but that doesn’t stop him from thinking he’s “got no chance of losing this time.” After that, he’ll be on the straight and narrow forever. It’s a story as old as time, and in the band’s hands, twice as interesting.

“Althea” doesn’t have the most pleasant of subject matters. There’s spiritual decay and a myopic disregard for the lessons of history and, in the background, there’s a concerned Robert Hunter wagging a finger at a strung-out Jerry Garcia. Basically, it’s an intervention, an intervention Jerry Garcia chose to ignore to his (and our) cost. It’s also a stunningly good song, with a sumptuous melody and an easy-going chug that takes the sting, if not the intent, out of the message.

There’s nothing fancy about “Friend of the Devil.” It’s a simple, straightforward song about a simple, straightforward man who’s made a bad deal that he regrets. Unfortunately, the person he’s made the deal with is the Devil, who does have a terrible habit of making things complicated. Still, even the Devil is no match for the Grateful Dead on a good day, and “Friend of the Devil” finds them on a very good day indeed. It’s as close to a classic song as they ever came, with a country vibe and an acoustic setting that lets the quality of the lyrics shine.

“Ripple” doesn’t belong in 2021. It belongs in 1970, when there was still hope and love and even, some said, the vague promise of peace. It’s a song for the flower children, for the Haight Ashbury hippies, and for the children of the garden. It’s mystical and it’s magical, and if you go into it with your cynic’s hat on, you’re going to think it’s the biggest pile of garbage this side of a landfill. So don’t. Take off your hat, stick a flower in your hair, and embrace the love… you know you want to.

Workingman’s Dead is a sublime album and “Uncle John’s Band” is a sublime song. It’s lean, sparse, and utterly dreamy, with little nods to Crosby, Stills, and Nash in the close harmonies and enough substance in the lyrics to do Neil Young proud. Few bands could allude to the Gadsden Flag of the American Revolution in the same breath as Robert Frost’s “Fire and Ice” without alienating huge swathes of their listeners. But then again, few bands could create such memorable melodies either. It’s a triumph.

Before “Touch of Grey” came along and knocked it off its perch, “Truckin'” was the Dead’s highest-charting single. The fact it managed to fly so high seems more in spite of its subject matter (a drug raid on the band’s hotel in New Orleans – a touchy subject for most bands even now, and practically a no-go area in 1970) than because of it. But even the puritans couldn’t resist Garcia’s guitars licks enough to put a spanner in the works. 27 years after its release, the Library of Congress did the honorable thing and recognized the song as a national treasure.

The last days and trial of the New Testament’s first martyr, St. Stephen, doesn’t sound a likely subject for a hit song. But if the record label tried to warn the Dead, they didn’t listen. Considering the result, it’s a very good thing they didn’t. A co-writing effort between Jerry Garcia, Robert Hunter, and Phil Lesh, “St. Stephen” is, as you’d expect, biblical in scale, with enough weight and enough heft to make even the Old Testament seem flimsy by comparison. The studio version is incendiary enough – the live version from 1969’s Live Dead is end of the world stuff.

You don’t have to know the Grateful Dead to know the line “Drivin’ that train/ High on cocaine.” It’s quite possibly the best opening line to any song ever, and the song it’s taken from, “Casey Jones,” might quite possibly be the best song in the Grateful Dead catalog. You might not agree. Maybe you think “St. Stephen” is the better of the two. Maybe you jumped on board the Dead bandwagon with “Touch of Grey” and still think it’s their finest piece. Whatever. It’s got a rebel we can all get behind, a beat that won’t quit, and a rhythm that is most definitely going to get you. In our eyes, it’s perfection, and if you don’t agree, go make your own list. Failing that, go listen to a Grateful Dead album. It’s what we’re going to do.