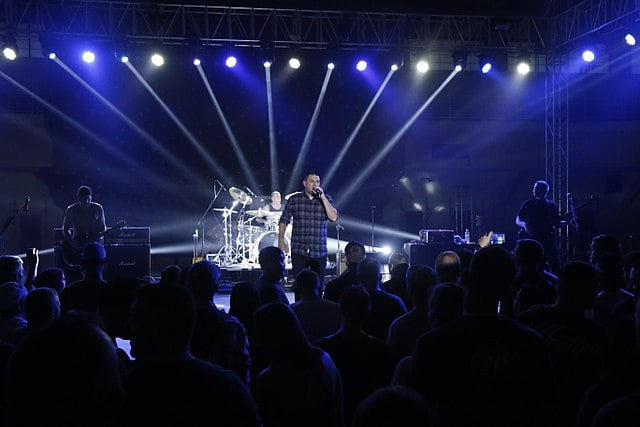 Our Alien Ant Farm songs ranked list looks at a great old American rock and roll band from the sunny State of California. The band was first formed in the second half of the 1990s and became one of the hottest groups at the end of the decade. The band’s first album released in 1999 was entitled Greatest Hits which was kind of an unusual name for a debut album. However, that was part of the humor of the band Alien Ant Farm. Continuing with that humor, their second album was entitled Anthology. It was an album that was easily the band’s most successful as it featured their number one hit single “Smooth Criminal,” which was a remake of the Michael Jackson song. Alien Ant Farm only released five albums throughout their career. However they remain a favorite of those who grew up in the late 90s and early 2000s as teenagers and 20-somethings.

We open up this Alien Ant Farm’s list with the great song “Let em’ Know.” The song was released on the band’s fifth studio album entitled Always and Forever,which seemed to be a spoof on the Heat Wave song title. Nonetheless, the track presented here “Let em’ Know,” was released as the first single from the album. Check out the great video below it’s a lot of fun.It just takes a little while to get going, but it’s worth it. The album was released in 2015.

Continuing on with our Alien Ant Farm songs list we present in the number nine spot the great song “Bad Morning.” This song opened up the band’s album Up In The Attic. It was the band’s fourth album released. The record was released in 2006. This one is heavy. The guitars are screaming in terror. It’s written in a dark minor key meant to scare your grandmother and give your neighbors a headache. Turn it up my man.

I love songs called  “1000 days.” I even love movies more called 1000 days. It usually means something terrifying which in the end is usually pretty entertaining.  The song “1000 Days,” does the job well in making you head spin on the opening note. The song was released on the album entitled Truant. The record was released in 2003. The Stone Temple Pilots Robert DeLeo and Dean Deleo produced this album making sure it was as heavy as it could get in Alien Ant Farm land.

At number seven on our Alien Ant Farms songs list is the very cool song “Around The Block.” The song was released on the great album Up In The Attic. Despite the album not doing so well on the music charts, this is truly a great Alien Ant Farm album. There were no singles released from the album, but the band did make a great video for the song we have chosen here in the number seven spot entitled “Around The Block”. Make sure to take a listen to this one.

Continuing with our Alien Ant Farm songs list we hit up the Up In The Attic album one more time. In the number six position we take a listen to to the great rocking song “Forgive and Forget.” The song was placed as the second track on the album following up the explosive opener “Bad Morning.” This one rocks heavier with a great guitar riff that chugs along as Dryden Mitchell sings like a madman. Got to check this one out because guitarist John Hill is on fire on this one.

At the halfway point on our great Alien Ant Farm songs list we present the killer song “Attitude.” The song was released on the Anthology album. It was released as the third single from the record. The song did not chart in the United States but it did hit the number sixty six position on the United Kingdom music charts.

We love how this song “Glow,”starts out with that muted guitar riff because you know something fierce is about to happen. Yet, instead of a blowing up, the band settles into a very cool groove surprising us all. And you know what? It’s kind of a nice surprise. We have always really dug this song. And who doesn’t love that very tasty solo by John Hill. At times Alien Ant Farm reminds us of bands like 311 especially on songs like this.

As we start to inch closer to the number one spot we turn to the three big songs from the Alien Ant Farm catalog. At number three on our list is a great song entitled “These Days.” The song “These Days.” was released on the album Truant. The album was released in 2003. However the song “These Days,” was released about two months earlier as the lead single. This is a smoking song with a to die for chorus. The video below shows the band crashing the BET Awards Red Carpet ceremony. It’s pretty funny.

Alien Ant Farm made some great videos in their day and the one for the song “Movies,” is one of their best. Just a lot of fun. And of course the song “Movies, is simply spectacular. The song was released on the album Anthology. “Movies,”was a top 40 hit on the US mainstream Rock charts as well as a top 20 hit on the US Billboard Modern Rock Charts. We’ll take any video that pays tribute to Willy Wonka in its own unique way. And in this video Mr. Miyagi lives.