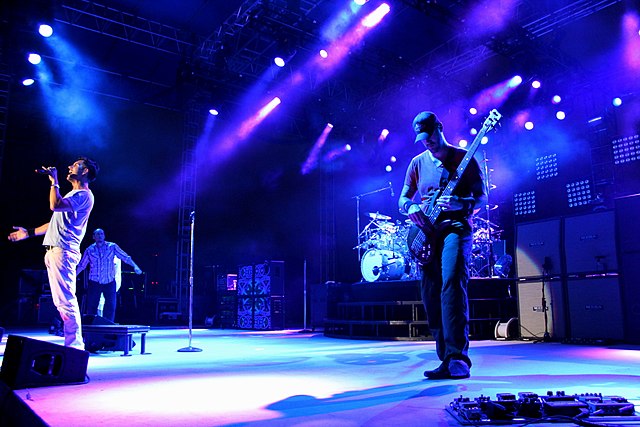 Our 311 songs rank list looks at a 1980s band that hailed from the city of Omaha Nebraska. 311 was a very popular band throughout the decade of the 1990s and have continued to grow musically well into the 2010s. The group has released 13 studio albums along with two amazing live records, and a handful of eps and DVDs. For a while they were one of the biggest selling rock bands of the decade. The band’s first album was released in 1993 entitled Music. That album would be followed up a year later in 1994 with the album Grassroots. In 1995, the band hit it really big with their fabulous album 311. Two years later, the band would change directions of bit with the release of their fourth studio album entitled Transistor.

The band released their final studio album on Capricorn records in 1999 and entitled Sound System. Two years later they returned with their sixth studio album entitled From Chaos on their new label Volcano Entertainment. In 2003, 311 released the album Evolver. Their eighth studio album quotes a little bit of American History with the title Don’t Tread On Me which was released on August 16th 2005. It would be another four years before 311 returned with their ninth studio album called Uplifter. This was the longest time the band ever took in between albums. For the Uplifter album the band got the great Bob Rock to produce.

Into the decade of the 2010s 311 went when they released a mini LP entitled Universal Pulse. The sound was about the same length as a Van Halen’s Diver Down clocking in and only 29 minutes. Once again a long period of time would pass between albums when 311 waited three years before they released their 11th studio album titled Stereolithic. Three more years would pass by until the band released their 12th studio album entitled Mosaic. Their most recent album released as of this writing in 2021 was issued two years ago on July 12th 2019 entitled Voyager which was the bands 13th studio album.

We open up our 311 songs list with the great song “Five of Everything. “This song was released on the album Stereolithic. The album was released in 2014. The great rockin mid-tempo groovin song opened up the album. The song “Five Of Everything,” was also released as the first single from the record. The song gets a little heavier as it moves along with the typical 311 rap about two-thirds of the way through. Some great vocal harmonies are also presented throughout the song.

Continuing with our 311 songs list we turn to the great song Sunset In July. We really dig the songs guitar licks at the songs opening. The song has a great chorus that is fun to sing along with. The song “Sunset in July,” was released on the album Universal Pulse. The album was issued in 2011. “Sunset in July,” was a top 10 hit on the US Billboard Alternative AirPlay charts which used to be called the Modern Rock Tracks charts.

In the number eight spot on our 311 songs list is the killer tune “All Mixed Up.” The song was released in 1996 on the 311 album. It was the fourth single released from their great album. “All Mixed Up,” was a top 10 hit on the US Billboard Alternative AirPlay charts peaking at number four as well as number three on the Canadian alternative music charts.

Listen to that great guitar at the beginning of this song. We love how it all exploded for a few measures and then just rips back into another great guitar riff style song. This one sounds really good. The sound of the snare just brakes on through really elevating the song. “Beautiful Disaster,” was released on the Transistor album. The album was released in 1997. The song “Beautiful Disaster,” was the third third single released from the record. The song hit number 21 on the US Billboard Alternative AirPlay charts.

In the number six spot on our 311 songs list is the track “Do You Write.” This is early 311 music. The song was released on the band’s first album entitled Music. “Do You Write.” was released as a single in the spring of 1993. It’s the first song to track on any music charts hitting number 27 on the US Billboard Alternative AirPlay charts.

In the number four spot on our 311 songs list is the very successful single entitled “Down.” The song “Down,” would become the band’s first number one record on the US Alternative AirPlay charts. The song was released on the album 311 that was issued in 1995. “Down,” was the third single released from the record. It was also a top-10 hit on the Canadian music Alternative AirPlay charts as well as a top 20 hit on the US Mainstream Rock charts. This was a big one for 311.

As we begin to come to a close on our 311 songs list we present the great grooving song “I’ll be here Awhile.” This is one of everyone’s favorite 311 songs. The song was released on the album From Chaos. It was issued as the second single from the album hitting number 15 on the US Billboard Adult Alternative music charts.

In the number two spot on our 311 songs list we turn to the legendary recording “Love Song.” This is an incredible remake of the great Cure song. 311 recorded and released this song on the soundtrack to the Adam Sandler film 50 First Dates. 311’s remake of the Cure’s “Love Song,” would turn out to become the band’s only second number one single of their career along with their earliest song entitled “Down.”

We close out our top 10 311 songs ranked list with the wonderful song “Amber.”
Just listen to the groove on this one. The way the snare drum just cuts right through as ther guitar intertwines back and forth on the off beats. This is just one of those great summer type style songs that you can’t get out of your head and just don’t want to stop singing. The song “Amber,” was released on their album From Chaos. It was the third single released from the album. It is the band’s only single to go gold in sales