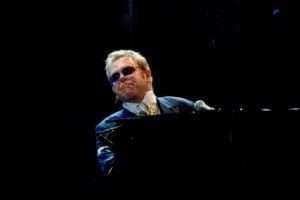 Bruce Springsteen once sang the words ‘Don’t Look Back,’ and that’s exactly what Elton John seems to not want to do either. At seventy four years old, the man wants to continue to be a creative artist. He never has really stopped releasing music unlike some other piano men we know….

Elton John’s Lockdown sessions album was a collaborative effort between Elton John and musical stars of the past and still very much present. Elton John worked with two of music’s most famous Stevie’s in Stevie Wonder and Stevie Nicks. The latter who said it was an incredible experience to work with Elton John; a thought that Elton John also very much expressed in working with Stevie Nicks. Who would not want to work with Stevie Nicks? Or Elton John to say the least. These are two of the most famous rock stars of all time. And of course the talents of Stevie Wonder are not even of this world.

Elton John did not only work with his long time colleagues in the music business. As a man who loves to continue to move forward, he spent a great deal of time in the Lockdown Sessions with some of music’s most recent stars. Elton John recorded with hip hop’s most popular artists like Nicki Minaj and Young Thug.  He also worked with youngsters like Charlie Puth and the sensational Miley Cyrus who knows a thing about show business, glamor and the spotlight as well as pushing boundaries that not everyone is always so comfortable with. However one of the album’s biggest highlights is the first single release entitled “Cold Heart,” which takes the chorus from Elton John’s single entitled “Sacrifice,” and mixes it up in a fabulous remix with pop music’s newest star Dua Lipa.

Elton John has often referred to the LockDown Session albums as his chance to become a session musician again like he was when he first started out in the music business. Elton John fans are just thrilled to have a new Elton John album. The man has easily been one of the most prolific singer songwriters of all time coming close to the throne that Paul McCartney holds. Now with the news that there is a documentary streaming in Apple Music as a holiday gift to fans, it just becomes one more wonderful Elton John item that his fans can now enjoy.