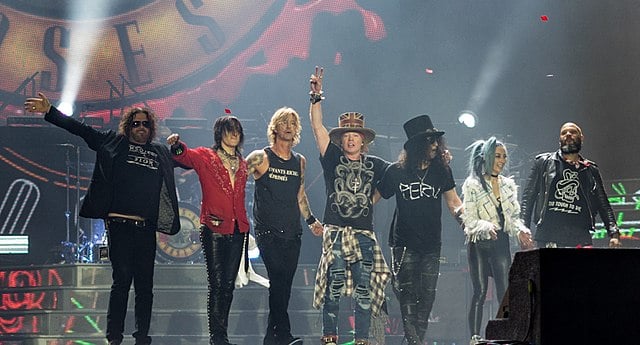 Our Guns N’ Roses albums ranked article takes a look at a band that became one of the biggest groups in the world in 1988. For handful of years there was no bigger a rock and roll band than Guns N’ Roses. They were loved on the same level as bands such as Led Zeppelin, The Beatles, The Rolling Stones and Nirvana. However, as big as they were, they threw it all away because they just could not get along. Yet, that’s a story for another time. If they were able to get along, or if they did not break up after their fourth album who knows how big Guns N’ Roses would have became. They might have become quite possibly the greatest band of all time had they continued releasing music like the music they released on Appetite For Destruction and Use Your Illusion I & II

There have been six albums released under the Guns N’ Roses name. However the albums Chinese Democracy and the Spaghetti Incident are kind of separate from the first 4 for various reasons. Number one being Chinese Democracy was basically just an Axl Rose album with all new members of the band. Spaghetti Incident was just a covers album. Nonetheless, we included them all in our Guns N Roses albums ranked list because there is just not much Guns N’ Roses released material.

We open up our Guns N’ Roses  albums ranked list with the album Chinese Democracy. This was an album that we thought would never be released. The only two members from the Guns N’ Roses glory days were Axl Rose and keyboardist Dizzy Reed. Chinese Democracy included guitar players Robin Finck and Paul Tobias, Josh Freese on drums and bassist Tommy Simpson who was one of the original members of The Replacements. Chinese Democracy  kept being delayed over and over again. Fact it was delayed for almost eight years. When  it was finally released it’s sold nowhere near what the record company expected. It is deemed one of the biggest, failures in rock history. It’s a good rock and roll album but it doesn’t compare to the original band and the great albums they released in the late 1980s and early 90s

The Guns N’ Roses album The Spaghetti Incident? was released in 1993. The album is filled with only covers of punks songs. It’s interesting to hears Guns N’ Roses cover these bands because the level of musicianship in Guns N’ Roses was so much superior to many of the bands they were covering. However, punk music was never really about musicianship, it was always about attitude. However, Guns N’ Roses had their own unique attitude that works rather well on these songs.

G N’ R Lies was the follow-up album release to Appetite for Destruction. Many fans don’t think of this as a ture true Guns N Roses studio album because it basically is made up of four tracks that were previously released on the EP Live ?!*@ Like a Suicide The last four songs were basically acoustic numbers. Fans weren’t too crazy over this album but with the massive success of Appetite for Destruction there was a yearning for more material so the record company just put this one out there. The album spawned one single entitled “Patience,” that became a hit for the band.

We close out are Guns and Roses albums ranked article with the band’s debut album Appetite For Destruction. This incredible album will always stand ias the best Guns N’ Roses album ever released. Not only that, it stands as one of the greatest rock and roll albums ever released. It’s hard to describe just how big this album was when is it released in 1997. Not just how big the album was, but how big Guns N Roses had become  in such a short period of time. When the album was initially released, it did not get as much attention as it would the following year. It was when the third single from the album was released entitled  “Sweet Child of Mine,” that Guns N Roses blew up all over the place.

During the summer of 1988, Appetite for Destruction spent four straight weeks at number one on the Billboard Top 200. The album has sold around 30 million copies on a worldwide basis making it one of the biggest selling albums in classic rock history. Every new generation of rock fans continue to discover this amazing record.