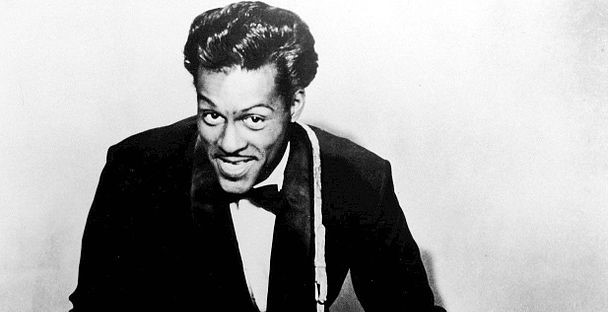 A few weeks ago I was asked by a national college newspaper to define Chuck Berry’s music. The first thought that came to mind was attitude. They were not happy with that answer and asked me to break down his music using academic music terms.  Any professional musician, and in most cases amature musicians could define the structure of Chuck Berry’s music on paper. Chuck Berry wrote songs using the standard 12 bar blues progression over the one four five chords in almost every one of his songs. But a description of musical theory really can’t describe what Chuck Berry actually did with those changes.  It was not about the progressions, or even the melodies that Chuck Berry wrote. Chuck Berry played the guitar with an attitude that had never been done before. Every musician that ever played with Chuck Berry from day one either hoped on that attitude bus or was left alone at the station.

Rock and Roll is all about attitude. Its been written time and time again that Rock and Roll is all about rebellion. However, you can’t have rebellion without attitude. Attitude comes first!  Chuck Berry heard those groovy piano rhythms that Johnnie Johnson was playing, and then incorporated every style of music that he had listened to since he was born and came up with a sound that was both angry and joyous at the same time. We can’t get into his head. We don’t know what he was thinking at the time. No matter how many interviews one reads about Chuck Berry, the fact is, Chuck Berry may not have understood what hit him. But when it hit him, Berry hit back with a guitar lick that changed everything.

Without Chuck Berry’s music, the 1950’s would have never been completely turned upside down. All the great 1950’s rockers would have been known now as all the great 1950’s crooners.There would be no Beatles, no Rolling Stones. And if there have never been any Beatles or Rolling Stones, there would have never been a Billy Joel, Elton John or Bruce Springsteen. Rock and Roll all began with what Chuck Berry did with that guitar. Those signature licks that forced his band mates to get on board and keep up, sealed the deal for the future of rock and roll. Bands and singers that thought they were hip before Chuck Berry began laying down those attitude filled licks, realized they had not really understood the meaning of the word hip.

You can’t describe music on paper. It has to be heard and seen. On paper, attitude is just a written word. Chuck Berry’s spirit, sound, playing and music defined that attitude. It  was that attitude that would set the stage to inspire all the artists that came after who shaped the soundtrack to our lives along with him.