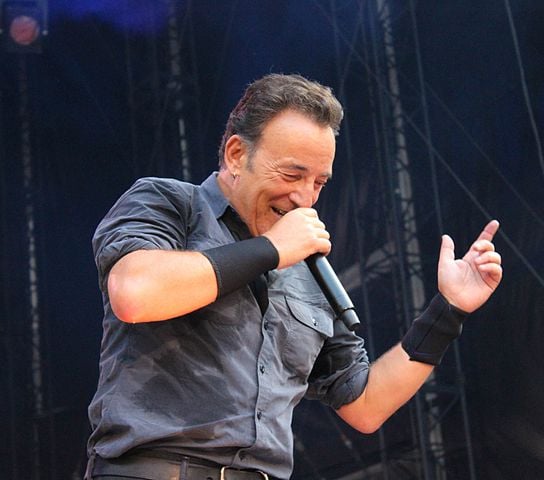 Not many Bruce Springsteen fans in the 1990’s would have expected the multiple album releases Springsteen would present to the public during the first decade of the 21st Century. While Springsteen released three studio albums and a greatest hits package from 1990 to the end of the decade, the 90’s were still his least productive period as far as releasing new material. However, everything changed in the 2000’s.  Springsteen’s most productive period of his career began with the reunion tour in 1999. Seemingly charged up from performing with the E Street Band on a full-time basis once again, Springsteen road that wave of inspiration into the year 2000. The band continued to perform worldwide selling out shows like it was 1984 all over again. The decade began with the first Bruce Springsteen and the E Street Band album in eighteen years. 2002’s The Rising stands alone in its own category simply because of the circumstances that bore its release. However, The Rising was only the beginning as Springsteen would release Devils and Dust in 2005, The Seeger Sessions in 2006, the magnificent Magic album in 2007 and Working on a Dream in 2009.

Bruce Springsteen’s “Working on a Dream,” was the title track from his 2009 album release Working on a Dream. As the follow  up album to 2007’s Magic record, the album presented fans with a wider variety of styles than Magic’s 1960’s based sound. When listening to the song, one can not help being reminded of Springsteen’s’ 2009 Super Bowl Halftime performance. The song was perhaps the highlight of the show and was a clear representation of the goals that Springsteen had set out lyrically in the music during the political changes that were occurring in the United States at the end of the decade.

One year after the release of Devils and Dust, the album We Shall Overcome: The Seeger Sessions, was released by Bruce Springsteen. The album featured an 18 piece band performing traditional American Folk Songs. Most of the material centered around music associated with the legendary folk artist Pete Seeger. However, from these sessions came a brand news Springsteen song written within the style of Pete Seeger’s music he was covering. The song “American Land,” stands as one of the best Bruce Springsteen songs of the 2000’s.

When Bruce Springsteen wrapped up the Sessions Band tour he released one of the best albums of his career. Clearly inspired by the political climate of the George W. Bush years, Springsteen’s Magic album was a record filled with anger, frustration, and protest. Wrapped in all those emotions were a set of songs that echoed classic 1960’s rock and pop. It was an album completely unexpected by Springsteen fans and as far as this writer is concerned, it was Springsteen’s best record since Darkness on the Edge of Town. While the first half of the record focused on that magical 1960’s sound, the album’s closing tracks were sung in a more road based East Coast Americana voice. One of the standout tracks was Springsteen’s beautiful “Long Walk Home.”

If you were one of the few fans that still buy vinyl, then you would also be one who would argue that the opening side to 2007’s Magic album could be put up against great Bruce album sides like side B of The Wild Innocent and E Street Shuffle, side A of Darkness on the Edge of Town and ..well ..both sides of Born to Run. On the song “You’ll Be Coming Down,” the multi guitar tracked opening leads the way for Max Weinberg’s snare drum to carry the voice of Bruce for a three-minute ride of pure 1960’s pop/rock joy.

There are album openers, and then there are Bruce Springsteen album openers. When hearing the first notes of “Radio Nowhere” crash through the speakers, one knows that there lies something special ahead. One of Springsteen’s greatest attributes has always been his ability to write lyrics on such a universal level that left everything open for interpretation. “Radio Nowhere,” was such a song that left one wondering where that road did indeed lead one to.

After the release of The Rising in 2002, Bruce Springsteen would release four more studio albums. In 2005, Springsteen released his third solo album entitled Devils and Dust. Unlike Nebraska and The Ghost of Tom Joad, the Devils and Dust album was not just an acoustic guitar and vocal recording. While the majority of the album’s arrangements focused on Springsteen’s voice and acoustic guitar, the sparse use of string lines and percussive rhythms defined an album that had more in common with Tunnel of Love than Nebraska from an arrangement standpoint. Although, the lyrical content and melodies clearly stood as a work all on their own. The album’s title track “Devils and Dust,” was the standout recording on the record.

Bruce Springsteen’s Working on a Dream album was often described as being a record filled with outtakes from the Magic sessions. Well we are not so sure about that statement, but what we are sure of is that Springsteen’s “This Life,” was the standout track on the Working on a Dream Album. The song comes off as a wonderful testament sung by a man who seemingly has found happiness in those surrounding him.

# 3- Girls in their Summer Clothes

As we have pointed out so many times in this Top 10 Springsteen Songs 2000’s list, the songs on the Magic LP were a clear representation of Springsteen’s love for 1960s music and a tribute to his teenage years. And more specifically, his teenage summers, because the song “Girls in their Summer Clothes,” is as close to a tribute as Springsteen will ever get to those classic AM radio 1960’s summer pop songs that filled the air waves and cemented a lifetime of memories for the millions growing up during that time period. The song “Girls in their Summer Clothes,”was released as the second single from the Magic LP in 2008. The song also won a Grammy for best Rock Song at the 2009 Grammy Awards.

There are some songs that are extremely difficult to write about for reasons both lyrically and musically. Bruce Springsteen’s “Your Own Worst Enemy,” is one of those songs. It was the most powerful song released on the Magic LP.  Some of the best Springsteen songs have always delivered  great closing lines. Right up there with some of his best was the closing line to “Your Own Worst Enemy,” in which Springsteen sang, “The Flag you flew so high, It drifted into the sky.” What ever your interpretation of those lyrics may be, it can’t be denied the depth of the meaning and the historic context in which they were written.

In 2001, the world was changed by the series of terrorist events that occurred on September 11th 2001 in the United States. Words cannot describe the pain endured by so many people connected to September 11th 2001. There is the story told by Springsteen that how one day a fan yelled out to him in public expressing the thought “we need you now.” Although words can never take away the pain, Springsteen set out to write songs that could help those suffering share and express their pain. It would be written in the most respectful way for the sole purpose of providing support. Bruce Springsteen’s The Rising album was released in 2002 as an ode to those who lost their lives and the families they left behind. Out of respect to the work and those who lost their lives on that cold September day, there is no way we could pull of songs from the record to stand alone in a best songs list. So we have listed the entire album as one work, one song. There is no other place for it but to stand alone at the top of the list.