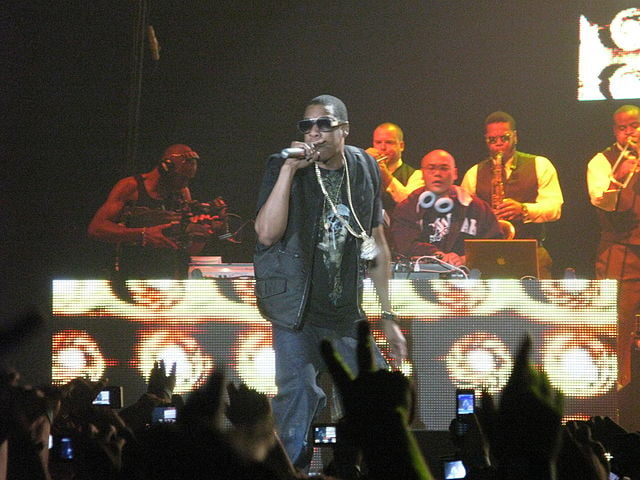 Our Jay-Z  Songs Ranked article looks at an artist whose original name is Shawn Corey Carter was born on 4th December 1969 in Brooklyn, New York. He is an American rapper and entrepreneur and also one of the most influential or rather iconic figures in hip-hop from the 1990s to early the 21st century.

Jay-Z began rapping under the name Jazzy that later shortened to Jay-Z. Together with two friends, they founded the company Roc-A-Fella Records where he released his first album ” Reasonable Doubt” in 1996. This album sold over a million copies in the U.S. After the debut album, a string of albums followed with a rate of at least an album per year through 2003. Hard Knock Life Vol 2 was the first to top the Billboard 200 album chart and also won him a Grammy Award for the best rap album.

From there, the well-acclaimed “The Blueprint” solidified his status as a preeminent voice in hip hop during the start of the 21 century. To cut a long story short, Jay-z is a legend in hip hop and rap with incredible hits. Below are the top ten songs by Jay-Z.

At number ten on our list is “Takeover” a song recorded by Jay-Z for The Blueprint album in 2001. This is a diss song aimed at rappers Prodigy of Mobb Deep and Nass. Before “Takeover, the best hip-hop diss tracks were “No Vaseline and “Hit ‘Em Up.” They were verbal assaults for crossing the line. Jay-Z released this song at the peak of their beef with Nas, a song that Nas was unable to avoid on the radio, in the club, and passing cars.

When performing a part of the track ” you was a ballerina/ I got the pictures I seen ya” Prodigy ‘s photograph as a child appears on the screen dressed in ballet clothes. The song is deemed as largely damaging to Mobb Deep’s career. This song created one of the most hyped rivalries in hip-hop and it was well-received by the fans.

Most hip-hop fans thought that that the song would end Na’s career instead, he responded to it with his diss track “Ether”. Jay-Z then responded to this with other tracks including “Don’t You Know”, “People Talkin” and “Supa Ugly.” Until a 2005 concert which had been branded “I declare War” Jay-Z had other intentions where he declared that the beef was done and they had their fun. He told the crowd “Let’s get this money” and he brought Nas on stage and the two embraced.

This song by Jay-Z is very famous and also appears on the BluePrint album. This is a notable song since it is the most powerful thesis of Jay-Z’s career-revitalizing as well as legacy-securing of “The Blueprint” album in 2001. Additionally, this is the best song that he has ever made with Kanye West.

The Blueprint was released to be Jay-Z’s reclamation of his fans and audience’s heart, and the good thing is that it did that very well. “Aint No Love Heart of the City” deals with this situation perfectly. The track pulls off a stunning trick of being a kiss-off to the haters who counted Jay-Z out and also an apology for the lapse into hypercapitalism. The song’s message is that everybody forgot the good deeds or rather how good Jay-Z was and they sold him out hastily, and needed to show love to him again. The “Heart of The City” is his “baby, please take me back” track, and surprisingly, it works because of sentimentalism.

“Hard Knock Life, the (Ghetto Anthem” is a single from Jay-Z’s third album volume 2. This is a pitch-modified sample of the track “It’s the Hard Knock Life” from the musical Annie-1977. This track was produced by “The 45 King” and by the time it was released it became the most successful single by Jay.

The song was nominated for the Best Rap Solo Performance at the Grammy Awards in 1999. Additionally, the song peaked at position 15 on the Billboard Hot 100. Outside the United States, the track peaked within the top ten tracks charts in Denmark, Canada, New Zealand, Germany, and more.

In 1998, this song cemented in the mind of most the ideal that Jay exists on another level than other humans and that he thinks different thoughts and maybe breathes different air. The underrated verses on “Hard Knock Life” are some of the finest as a cadence artist by Jay-Z. The song is about how terrible ghetto life is, but not for Jay whom you cannot be compared with.

Jay-Z released this track featuring Alicia Keys in 2009. By at least a measure, the “EmpireState of Mind” is known to be the biggest record in Jay-Z’s career. Surprisingly, he had never featured at the top of Hot 100 as a lead artist not until he released this collabo with Alicia Keys. “Jay hit me up like, ‘I feel like I have this record that’s going to be the anthem of New York.” These were Alicia Keys’ words explaining to MTV.

In this song’s video which is basically in black and white, Keys and Jay-Z are shown performing the track from different locations in New York. To clearly show how this song was a hit, Billboard placed it at number 15 on the “40 biggest duets of all time” while it also featured at number 8 VH1 list of 100 best tracks of the 00s. NME placed this song at position 13 of its 150 greatest songs of the past fifteen years. In this song, Jay boldly says his credentials as the ” New Sinatra” and Keys aims for a universal uplift. Her line “These streets will make you feel brand new/Big lights will inspire you” is amazing.

This song is recorded by Beyonce featuring her boyfriend who later became her husband Jay-Z. The song is recorded from Beyonce’s debut solo studio album known as Dangerously in Love. The song was released through Music World and Columbia Records as the album’s lead single in 2003.

From the fans’ reviews, Jay-Z’s verse is a standout with great dominance. Jay’s engineer said that the track ” Crazy in Love ” would typically be a breakthrough for Beyonce and this came to be true since it topped the Billboard Hot 100 consecutively for eight weeks. Bey oozes love while he raps amazingly about chinchilla furs to keep his cool.

On our top 5 of the top ten Jay-Z songs, at number 5 is “Big Pimpin” by Jay-Z featuring UGK. This track was released in 2000 as the third and also final single from Jay’s fourth studio album Life and Times of S. Carter Volume 3.

The song features a guest appearance coming from the Southern hip hop group- the UGK and the production is from Timbaland. “Big Pimpin” was typically the most successful single hit from the album attaining number 18 on the Billboard Hot 100 and topped the Rhythmic Top 40 chart. From his verse, Jay is inspired by the Pretty Tony character The Mack film in 1973. Jay was a big fan of UGK’s “Ridin Dirty album” the reason he reached out to him to collaborate on his fourth album. The song is amazing and was shot on a boat or rather a yacht in Trinidad. It raised the bar for the rap video opulence.

Jay-Z released this song from the ” In My Lifetime Volume 1″ album in 1997. As a former drug dealer, paranoia is indeed an overarching theme in his discography. In this hit, Jay-z expresses his inner psyche thus revealing foiled plots and brushes with death as well as a conscience that heavily weighs on him.

This song featured two samples. The first is the hit gangsta movie ” Going soft if a habit, you’ve got to keep yourself mean” while the second was “I Got The” done by Labi Siffre. After the song became an immediate anthem he took the track step ahead and created a movie with soundtracks based on the song. Incredibly the streets were watching including everyone else.

The retirement of Jay-Z was transient with wonderful interruptions including “Dear Summer” which was featured on Memphis Bleek 534 album. Jay-Z initially debuted the lines and lyrics to “Dear Summer” which is a love song about. This song is notable since it was the first track by Jay-Z to be released after he retired from music during the summer of 2003. This song peaked at position 30 on Hot Hip-Hop and R&B Songs chart.

At position two is the hit “Where I’m From.” This hit was recorded by producer Ron “Amen-Ra” in 1996. It is featured in “In My Lifetime, Volume 1.” The song is greatly influenced by puff Daddy and features some of the grittiest and grimiest moments of Jay-z’s catalog.

Jay-Z switched his point of view to street-level-dealer while speaking of individuals whose bank accounts were more of St.Ides than Cristal. He dropped one of his brightest or rather cleverest couplets of his career in ” Where you can’t put your vest away and say you’ll wear it tomorrow/Cause the day after we’ll be saying, ‘Damn I was just with him yesterday.”

At the top of our list is this famous hit ” Public Service Announcement” by Jay-Z and produced by Just Blaze in “The Black Album.” This song is incredible and without trying hard, you can just imagine the whole song in your head, line by line. This was released in 2003. Jay-z finds time to spew several of his most quote-worthy bars such as “I got the baddest chick in the game, wearing my chain” and a favorite one “I’m like, Che Guevara with bling on, I’m complex!” This song is rendered as one of his most successful in his career.

Jay-Z is a legend who inspired many through his numerous songs. He is outstanding and a fan favorite artist. The above songs by Jay-Z are incredible and worth listening to. Enjoy!