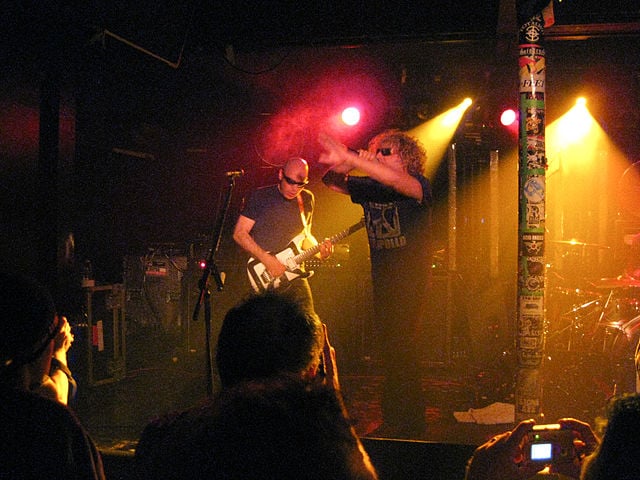 Our Top 10 Chickenfoot Songs list takes a look at the Supergroup formed by Sammy Hagar, Joe Satriani, Michael Anthony and Chad Smith called Chickenfoot. The band was first formed in 2008. Sammy Hagar and Michael Anthony go way back as former members of Van Halen. It’s obvious that Sammy Hagar and Michael Anthony were soul brothers in that group and they have continued to work together over the years not just in Chickenfoot, but also The Circle. The selection of Joe Satriani on guitar was so perfect. It was almost like David Lee Roth picking Steve Vai to form his own band back in the 80s. And of course Chad Smith is just a phenomenal drummer who plays heavy, hard and with such a funk groove that it just seemed to blend together perfectly between these four incredible musicians.

Now some people may say why do a top 10 Chickenfoot songs list when the band has only released two albums? Well for one, it’s no sure thing that Chickenfoot will ever release another one. And if they do, well we can just update this list. That’s the beauty of publishing articles on the internet. And the number two reason behind our top 10 lists is to spread the music to people who may not know about the band. To turn people on to some really good rock and roll. In the end we’re celebrating the music of Chickenfoot by writing about great rock and roll songs and presenting the videos of these songs for people to just sit back and enjoy. What’s wrong with that?

If you one of those young music fans out there just checking out this article we hope our top 10 Chickenfoot songs list turns you on to this incredible band. May it also also lead you to discover the amazing solo career of Sammy Hagar, including his music he released as lead singer of Montrose and obviously all the Van Halen albums he recorded with Michael Anthony and Eddie and Alex. We also hope it turns you on to the incredible guitar genius of Joe Satriani and his amazing solo albums. And of course you need to listen to Chad Smith and his band The Red Hot Chili Peppers . This list is rock and roll!

We open up our top 10 chicken foot songs list with the sound of Chad Smith’s drums crashing into the great guitar work of Joe Satriani and the killer bass playing of Michael Anthony. The song “Divine Intervention,” was released in 2017 on the album Best+ Live. Listen to those great Michael Anthony backing vocals on the chorus. Slow cooking killer this one is.

We continue our Chickenfoot songs list with the great cover of the Deep Purple song “Highway Star.” We just had to include this one. This was another track on the Best+Live album. If you don’t have this amazing Chickenfoot CD set you need to go out to the store and buy it right now. the Best+Live album included 25 amazing tracks.

One more time we will hit up the Best+Live CD set with the killer song “Avenida Revolution.” Not only did this track appear on the live album, it was the opening track to the band’s first album entitled Chickenfoot. It was never released a single, but we’ve always loved this dark heavy number.

Continuing with our Chickenfoot songs list we turn to the band’s first album and the track “My Kinda of Girl.” The song was actually released as the fifth single from the record although it didn’t chart in the US. And that’s pretty sad because this is just a great driving rock and roll song that sounds perfect on the radio It’s Sammy Hagar all the way. At 2 minutes and 50 seconds Joe Satriani rips into his awesome guitar solo that just fits so perfectly. Love this one, and so should you

The song “Bigfoot,” was released on the band’s second album entitled Chickenfoot III. The song was released as the first single from the record. The song broke into the US Billboard Mainstream Rock charts peaking at number 32. It’s the last song of the band’s to chart. Speaking of charts Michael Anthony’s 8th note groove is totally off the charts on this one. Boy does this one groove baby. Some great Led Zeppelin style licks and of course augmented by the Joe Satriani killer guitar solo. The ending of the video is quite surprising, oh boy!

The third single released from the Chickenfoot album Chickenfoot III was the great tune entitled “Different Devil.” This semi rocking ballad sounds like something that would have fit perfectly on Sammy Hagar’s Standing Hampton album

Some nice little down home blues takes the number four spot on our Top 10 Chickenfoot songs list. The song was released on the live album entitled LV. The album was released in 2012. Listen to that Chad Smith snare drum and how it just cuts right through everything and sets the groove in the pocket so beautifully.

There’s nothing we like better than Led Zeppelin style riffs. This sounds like something that might have been released by Montrose. Sprinkle a little bit of rock candy in it and some Sammy Hagar vocals and you got something monstrous. “Soap on a Rope,” was released on the first Chickenfoot album. It was also issueD as  the second single from the record. And it didn’t even chart…. what a crime that it didn’t even chart……. I mean come on people this is rock and roll at its best.

The songs just keep getting better and better on this top 10 Chickenfoot songs list. We can listen to that guitar riff over and over again. When Chad and Michael jump in, chills just run through our body. And of course Sammy takes over and it’s off to the races. Simply spectacular! This was the first single the band ever released as Chickenfoot.