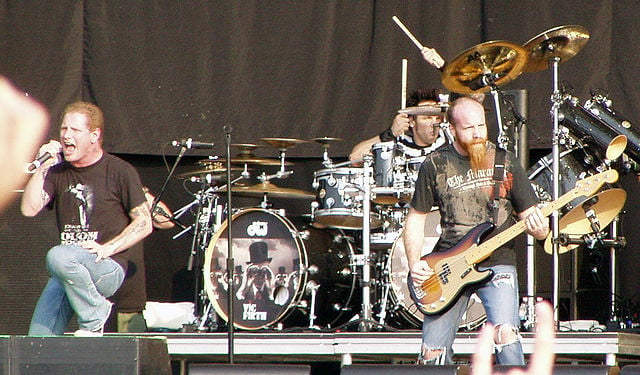 Our Stone Sour songs ranked list looks at the songs of a great rock band formed  in 1992 out of the city of Des Moines, Iowa. There have been many changes in the group over the years as the band has broken up and reformed during their career. Nonetheless, from 2002 to 2017 the band has released six great studio albums and have been nominated for multiple Grammy Awards. Our top 10 Stone Sour songs list takes a listen to ten of our favorite Stone Sour songs.

We open up our Stone Sour songs list with this great track entitled”Rose Red Violent Blue (This Song Is Dumb & So Am I).”  Sometimes you just want to pick the perfect song to open up a bands top 10 songs list and this one just so perfectly fits. This is heavy metal meets The Beatles. The changes are very much Beatles like but the vocals are all Stone Roses. This is one of the last singles the band has ever released. The song was released on their album entuited Hydrograd. The song was a big success on the Billboard rock charts where it peaked at number 10 on the Billboard US Mainstream Rock Songs charts.

Continuing with our Stone Sour songs list we turn to the song “Absolute Zero.” The song was part of a double sided single that also included the great song “Gone Sovereign.” This one is pretty heavy with a great chorus that grabs you instantly. The song hit number two on the Billboard US Mainstream Rock Tracks Charts. This amazing double-single was released on the band’s album entitled House of Gold & Bones – Part 1. This was the band’s fourth studio album release. The album was released in 2012

Moving along on our Stone Sour songs list we present a song that is much less heavy than the previous song on the list. This sweet sounding ballad has a bit of a Pink Floyd vibe ringing through the first part of the song until it transforms into a Creed type ballad. The song “Sillyworld” was released as the third single from the album entitled Come What(ever) May. The album was released in 2006. The great video for the song that should not be missed was directed by David Brucha. The song “Sillyworld” hit number two on the Billboard US Mainstream Rock Tracks Charts.

In the number six position on our Stone Sour songs list is the grooving heavy track “Song # 3.” The song was released on one of the band’s most recent albums entitled Hydrograd. This is a really good song that stands easily as one of our favorite Stone Sour songs. It’s just so addictive. The song hit number one on the Billboard US Mainstream Rock Tracks Charts and stayed in that spot for over a month. Another great entertaining video from the band.

At the halfway point on our Stone Sour songs list is the sensational song entitled “Bother.” This was one of the group’s first really successful songs that showcased the band into the mainstream rock and roll arena., The song’s inclusion on the soundtrack to the motion picture Spider Man helped the band gain popularity. The song hit number two on the Billboard US Mainstream Rock Tracks Charts.

Earlier on this list we took a listen to the great song Absolute Zero.” In the number four spot we present the first half of that great two sided single entitled “Gone Sovereign. The song was released on the band’s fourth studio album entitled House of Gold & Bones – Part 1.Listen to that great guitar riff at the start of the song. This is pretty much as heavy as the band has ever gotten and it sounds so sweet

The band’s fourth album House of Gold & Bones – Part 1 stands as one of the best rock and roll albums released of the 2010s. There are many reasons for that title. One of the biggest reasons is this fantastic song entitled “Tired.” The band Stone Sour released the song “Tired,” as the second single from the album. It served them well as it went all the way to the number one spot on the Billboard Mainstream Rock charts. Once again, the great work by guitarist James Root is phenomenal.

This Chris Isaak songs seems to keep showing up our our tip 10 songs lists. It’s one of the most widely covered songs of the 21st century. The Stone Sour cover of this Chris Isaak song is one of our favourites. What we love about this cover is its simplicity. It’s all about the song and the band covers it in in its most simple and genuine form.

We close out our Stone Sour songs list with their legendary song “Through Glass.” The songs was released in 2006 . It was issued on the band’s second album enetited Come What(ever) May. This would become the band’s most popular song of their career. The song went straight to number one on the Billboard Mainstream Rock Tracks charts and stayed in the number one spot for almost two months. It also became the band’s only single to break into the Billboard Hot 100’s top 40. It would also become the band’s first platinum selling single.