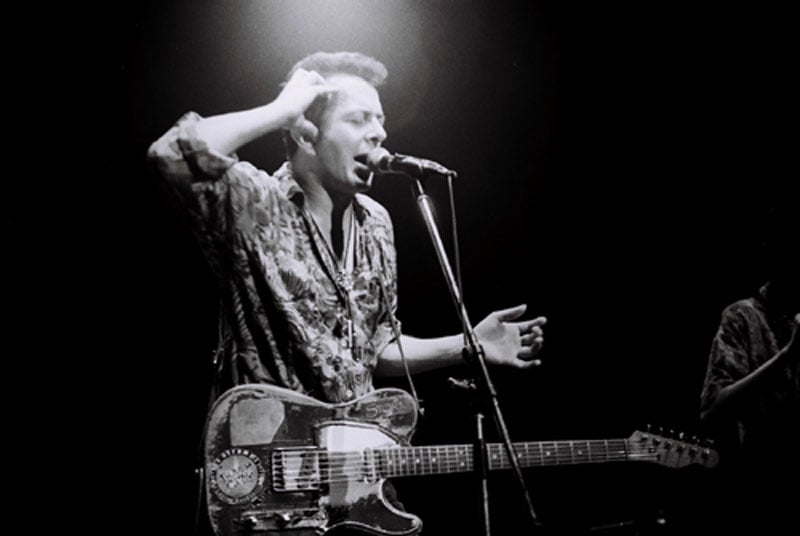 The Clash were an English rock band formed in 1976 in London who were one of the most important bands of the original punk rock movement. However, as their career moved forward they progressed beyond this and went on to include elements of other genres such as reggae and funk. Throughout most of their time together the line-up consisted of vocalist and guitarist Joe Strummer, bassist Paul Simonon, drummer Topper Headon and guitarist Mick Jones. Headon left in 1982 and then Jones left the following year due to internal conflict with the other members. They continued with several other line-ups before splitting up in 1986.

They achieved much commercial success in the United Kingdom when they released their self titled debut in 1977. They broke America in 1979 with the release of their third album London Calling which to this day is considered to be one of the greatest rock albums of all time. Further success came along with the release of Combat Rock

in 1982 which included the hit “Rock the Casbah” which helped the album to sell double platinum. They released their final album Cut the Crap in 1985.

Their political lyrics, boundary-crossing musical experimentation and general rebellious attitude saw them becoming highly influential on many forms of rock music and culturally significant. Although facing criticism from some factions of the punk scene for selling out, they never-the-less have been widely referred to as “The Only Band That Matters.” The were inducted into the Rock n Roll Hall of Fame in 2003 shortly after Strummer’s death.

10. Lost in the Supermarket

, this melodic track features Jones on vocals singing lyrics written by Strummer and lyrically is an anti-consumerism song. It is a song that shows a less bombastic side to The Clash, tackling the issue of loneliness and insecurity with an atmosphere that suits it’s subject matter. All in all it show’s the band starting to veer away from the confines of punk and progress into a much more diverse act.

This track from Combat Rock features of Headon’s best performances as he lays down an impressive tribal beat which would also turn out to be one of his last. This was essentially the beginning of the end for the band, as there was much internal conflict due to musical differences coupled with drug abuse and the rather cliched notion of international fame taking its toll. It may not have been their last album but Combat Rock was easily their last great recording as Cut the Crap

was generally rather poor. Many years later sampled by hip hop artist MIA, the lyrics of this song deal with American soldiers serving in Vietnam who got Vietnamese women pregnant only to completely abandon them when they returned home. One of their most poignant songs and another which shows their capabilities as musicians, it is a slow and sad sounding number.

From their debut, The Clash

, this track deals with youth unemployment and the lack of appeal of the jobs that are available. Definitely the band at their most punk point, as they got bigger, richer and famous they started to debate whether or not to keep this song on their live setlist as to avoid seeming hypocritical. However, they decided to keep it as it was a fan favourite.

This track, released solely as a single shows the band truly starting to evolve as it combines punk with reggae and lyrically calls for racial unity, making it arguably the ultimate anti-fascist anthem. It features The Clash’s most iconic line ever written “If Adolf Hitler were here today, they’d send the limousine anyway” which a reference to the fact that fascist politics were on the rise again due to the emergence of groups such as the National Front. It is a true culturally significant anthem which has remained relevant at many times since it’s release.

The debut single from the Clash’s debut album The Clash is one of the greatest debuts of all time. At just two minutes, it is quite possibly the band’s most punk track ever. Lyrically, it deals with just about everything wrong with society at the time. This was the start of the revolution.

Continuing with our top 10 Clash Songs we turn to another song from London Calling. This anthemic sounding song is something of a follow-on from Career Opportunities , as it see’s the band taking another pot-shot at the generally meaningless world of work and capitalism. With that said, the song is not downbeat by any means. It has an upbeat feel that gives it a positive vibe.

The title track from their greatest album, it is also their most famous song. The best thing about this song from a musical perspective it’s atmosphere- which can be best be described as cold and bleak sounding. This suits the song’s lyrical content which tackles the end of civilised society as we know it. Although not exclusively about nuclear war, Strummer at one point sings about the concept of “a nuclear error” which is actually a reference to the problems plaguing London such as police brutality and excessive drug use. Another track that has some reggae influence, it is a true masterpiece.

3. Should I Stay or Should I go

Yet another cut from Combat Rock that very much plummeted the band into stadium rock territory, it features one of the greatest classic rock riffs of all time. Another notable thing about it is that it has Jones on vocals. It was their only number 1 in the UK but ironically not until ten years after it’s release after being featured in a Levi’s advert.

Another “Clashic” track that was only released solely as a single. Released in 1980, it reached number 12 in the charts. It is undoubtedly the biggest example of the band’s dub influence. It’s lyrics talk about how the pressures of capitalism can often force people to resort to doing things such as robbing banks.

At number 1 on our top 10 Clash songs list is another non-album single which shows The Clash at the peak of their early period. Despite this, it hinted at the things that were to come. It was produced by Lee “Scratch” Perry who coincidentally also produced Junior Murvin’s “Police and Thieves” which the band did a more famous cover of. Lyrically it is speaking out against their own label CBS, which is similar to what the Sex Pistols did with “EMI”. Also featuring an impressive guitar solo from Jones, it is truly the start of something that would change music and culture forever