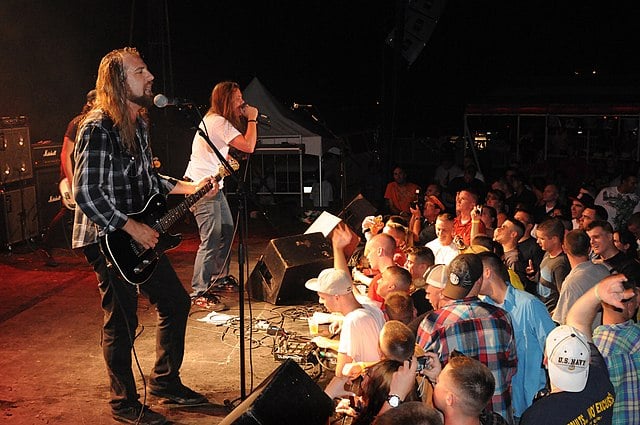 Our top ten songs from the Red Jumpsuit Apparatus looks at the best work from a pop punk/ emo bad who were formed in Florida in 2003. Their rather odd sounding name came about when the members reportedly came up with whatever random words came to them. Their first ever recording was a six song ep which they used to promote themselves.

Since the release of their debut album Don’t You Fake It in 2006, the Red Jumpsuit Apparatus have enjoyed much popularity in the emo scene. They have released five albums in total with their most recent being in 2018. Their second record Lonely Road released in 2009 is their most successful, although they have continued to have success with numerous singles from subsequent albums, with a lot of their songs topping the US Christian charts. RJA are one of those bands who’s fanbase has grown up with them, and their sound has been classed as alternative rock as well as post-hardcore. Although their fanbase is a predominately young one, they are still popular with their intended demographic.

So with this list, we will look at the best ten songs from this band’s career.

Kicking off our Red Jumpsuit Apparatus list is this track from their most recent release, The Emergency ep released in 2020. The song is about social media and the negative effects that it can have on people. It is the closing track of the ep and is effective as a final track as it has a rather dark vibe to it.

Up next we have a song taken from the band’s debut album Don’t You Fake It released in 2006. It is about how the band members are happy to have found success and live their dream but at the same time feel slightly down about being on tour and missing their family and friends. This is evident in the lyric: “Am I supposed to be happy with all I ever wanted? It comes with a price.”

The band’s fourth album titled 4 begins with this track that is nine minutes long and is a sequel to their debut album’s closing number “Grim 2.0.” This see’s the band experimenting with their sound for the first time, featuring a piano part and a generally very eerie sound which includes spoken word monologues.

This next song was the lead single from the band’s ep The Hell Or High Water released in 2010. It was recorded in the band’s own studio in Florida and mixed by Paul Lapinski. It was their first independent release after leaving Virgin Records due to them being disappointed with the promotion of their second album.

At the number six position on our Red Jumpsuit Apparatus Songs list is this track taken from the band’s third album Am I The Enemy released in 2011. The album goes back to the sound of the first album, with this track having a heavier sound. This was the lead single to be released from the album. It was produced by Josh Feldman who has worked with bands such as The Used and Story Of The Year.

Ending the first half of this list is the second single of the band’s first album Don’t You Fake It released in 2006. Despite a mixed critical reception, it was successful reaching twenty-five on the US Billboard. Although critics stated that while the band’s sound was not ground-breaking or particularly original, they praised the band’s level of musicianship. This song was featured on the soundtrack to the movie Never Back Down.

Here we have the second single from the band’s second album Lonely Road released in 2009. After the release of the first single “You Better Pray” it was released as a free download. This song has a slightly heavier sound to it, and could be described as post hardcore. The mixed reception that the album faced generally revolve around the more mature direction that the band took with it. Whilst some critics welcomed the change and praised the band for moving past the pop punk sound of the debut record, others felt that they were not quite able to pull it off.

At number three is another song taken from Lonely Road . Despite its mixed critical reception, the record is the band’s most successful album, peaking at number fourteen on the Billboard 200. This was the first single to be released from it and a music video was produced for it. Musically, it has a lot more of an alternative rock feel to it, rather than the emo sound of their first record, actually having somewhat of a nineties feel to it resembling bands such as Stone Temple Pilots.

At number two on this list is a track taken from their debut record which also has another version on their demo, with this version being more acoustic. It was their third single released in 2007. It is apparently dedicated to eight high school students from Alabama who all lost their lives when a tornado struck their high school in 2007. Because of this, the school made it the theme to their prom that year. Its highest position was at number twenty-two on the Billboard bubbling under hot 100 chart. It is a very emotive sounding song.

At number one on our Red Jumpsuit Apparatus songs list is this track from Don’t You Fake It . It got to number twenty-four in the US. Along with “The Kill” by 30 Seconds To Mars, it is the longest running song on the Billboard chart to not have topped it, with both of them spending fifty-two weeks on it. It has four different versions including an acoustic version and to this day is the band’s most popular single. Lyrically it deals with the subject of domestic abuse.