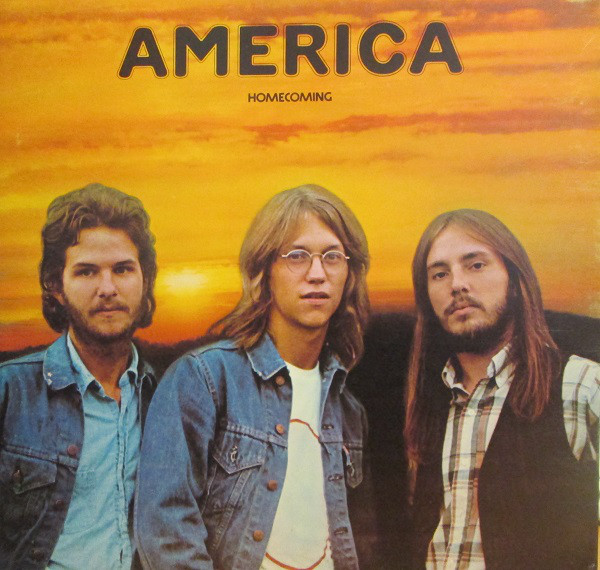 Our Top 10 America songs list takes a look at a band that in many ways defined the term soft rock. In no way is that a negative because the band wrote and recorded some of the most loved songs of the early 1970’s. When many critics and fans discus which bands demonstrated the greatest harmonies, groups like The Beach Boys, The Four Seasons, and  Crosby Stills Nash and Young are often the most brought up. However, the band America not only displayed some of the most incredible harmonic vocal performances on record, the voices of Dewey Bunnell, Dan Peek, and Gerry Beckley were unique in resonance and frequency. There has always been this incredible warmth, tenderness, and originality to their vocals. Almost cinematic in one sense. No one has ever sounded like America. Their songs were brilliant, their production pristine, especially in the recording of the guitars, but it’s those vocals that made everyone fall in love with the band many years ago.

With many of our top 10 lists we try to promote some of the lesser known songs that did not get the credit deserved. However, with America, their singles were so brilliant, we did not want to leave any out. So there is really no surprises here if your an America fan. Nonetheless, if your not familiar with this fantastic band, one run through this list will have you collecting their music instantly.

We start out our top 10 America songs list in a way that we said we were not going to do, list an unfamiliar song. However, the rare inclusion of ex-Journey vocalist Steve Perry on this track made this one an easy decision to include on this list.  The misspelled titled song “Can’t Fall Asleep To A Lullabye,” was released in 1984. What some find incredibly interesting about this song is that Bill Mumy who played the iconic character Will on the 1960’s television series Lost In Space

is a co-writer on this song. Mumy actually wrote more than just one song with America and had a huge MTV video hit called “Fish Heads,” in the early 1980’s. What do you think of that Dr. Smith?

America’s “You Can Do Magic,” is the only America song on this list besides “Can’t Fall Asleep To A Lullaby,” that was not released in the 1970’s. The song was released in 1982 on the album View From The Ground.

The song was written by the great musical composer Russ Ballard. At the time America was no longer a trio as Dan Peek had left the band in the late 1970’s.

From this point on, its all classic America songs. The song “I Need You,” was released on the band’s debut album America

in 1971. The song was released as the second single from the album after the smash hit “A Horse With No Name.”

in 1977 which would be the final album that Dan Peek would release with the band.

Everyone had their favorite America song, but “Daisy Jane,” was one of those special America songs that every fan loved. The song was released on the band’s Hearts album. The record was released in 1975 and became on of the bands most commercially successful  albums.

Everyone of our top 5 America songs have spectacular guitar introductions. The combination of the guitar intros that gave way to those wondrous voices made listening to am and fm radio a joyous experience when America songs filled the airwaves in the early 1970’s. The song “Ventura Highway,” was released on the Homecoming

America’s “Lonely People,” was issued in 1974. The song was released on the Holiday

album. The song was written by Dan Peek and his wife Catherine. In interviews Dan Peek described the song as a response to The Beatles “Eleanor Rigby.” The song was the second single released from the album. “Lonely People,” reached all the way to the number five position on the Billboard Hot 100 in 1974.

The magical song “Tim Man,” with its lyrical ode to The Wizard of Oz

was the lead single from America’s Holiday

album in 1974. The song was a huge hit for the band reaching all the way to the number four spot on the Billboard Hot 100. The song hit number one on the US Billboard Adult Contemporary charts.

America’s song “A Horse With No Name,” was the band’s first single release of their career. The song was so brilliantly written and performed that it easily hit the number one spot on the Billboard Hot 100. The band only reached the number one spot one more time in their career. Many great bands and famous rock bands release albums for forty to fifty years and never have a number one single. Bruce Springsteen, Bob Dylan, Creedence Clearwater Revival, Jethro Tull and even James Brown to name just a few never had a number one single. America did it on their first ever single release.

The beauty of this song is so completely overwhelming. Ask any America fan what their favorite America song is, and nine times out of ten they will say “Sister Golden Hair.” America’s “Sister Golden Hair,” was the band’s second number one song of their career. The band hit number one with the song in 1975. They did it in a year in which Elton John had three number one singles, and bands and artists like The Doobie Brothers, David Bowie, The Eagles, Linda Ronstadt and Paul McCartney all hit the number one spots with singles. What a great time for music!