Thunder And Lightning was the final studio album to be released by Irish rock band Thin Lizzy in 1983. It was the follow up to the 1981 LP Renegade, a record that sold modestly and that had prompted a line up change at the end of the supporting tour. Guitarist Snowy White left, mainly as a consequence of the lack of clarity as to whether recording sessions were for Thin Lizzy records, or for Phil Lynott’s solo work. His argument was that if he was recording on the later that he should be paid as a session musician. White was unwilling to carry on, and cited the inability of the members to work at the same as him as another factor in his decision to quit.

Long time members Phil Lynott, Scott Gorham, and Brian Downy eventually decided that Tygers of Pan Tang guitarist John Sykes would be the best replacement for White. Sykes’ last contribution for them had been on the single “Love Potion No.9”. These four were joined in the studio by keyboard player Darren Wharton. Front man Phil Lynott was anticipating that the playing of Sykes would provide Thin Lizzy with a harder edge to their sound. He had already stressed that Thunder and Lightning would be their swansong album.

The addition of Sykes turned out to be an inspired decision, with his guitar playing being heavier than anything previously recorded by the band. Although the band had it’s trademark twin guitar sound, Gorham had tended to allow the other guitarist to play more lead parts. The American guitarist was inspired by the freshness of the new recruit not to mention Sykes’ powerful playing. The twin guitar sound was at its heaviest for this album. The two heaviest tracks being selected to be singles. 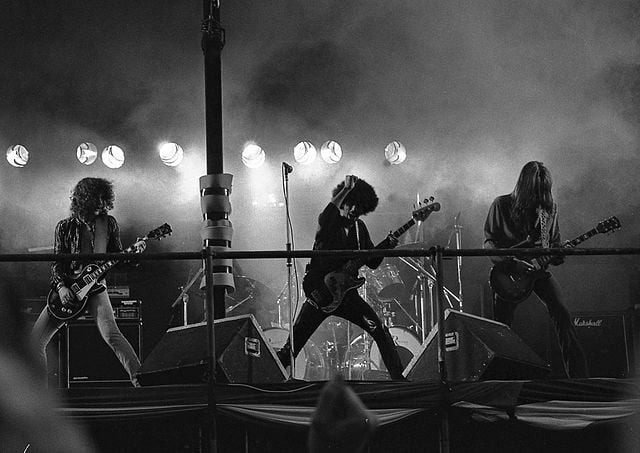 The recording of Thunder and Lightning began in 1982, and it was released the following year. The performance of Sykes is outstanding throughout, and it stimulated Gorham to raise his game too. The riffs and the solos are sharp, catchy, and heavy, “Cold Sweet” being a prime example. It was a fine example of Thin Lizzy reinventing themselves yet preserving their distinctive sound.

Aside from the twin guitars this album feature the excellent bass lines of Lynott and the adaptable and intuitive drumming of Downy for the last time alongside the keyboards of Wharton. In parts the keyboards contrast with the heavier guitar riffs, yet add depth to the tracks. Take the songs “The Sun Goes Down”, and “Holy War” as examples. Those same tracks also highlight how versatile Downy’s drumming was.

There are some fine hard rock tunes on this opus, and it showed how well this line up of the group worked with each other. It was a welcome return to form after the disappointing over all impact of Renegades. The group reaped the reward of having Sykes among them and he fitted in with the others far more than White had done.

The title track, “Cold Sweat”, “Holy War”, plus “Bad Habits” are excellent pieces of heavy rock, the guitar solo on “Cold Sweat” being a great example of Sykes’ power playing. The band decided to release “Thunder and Lighting” as well as “Cold Sweat” as the singles from the album. The crisp, clear, and versatile bass lines from Lynott demonstrate what an innovative player he was. His vocals were more consistent than on Renegades, making this a fitting epitaph for a great rock group.

Phil Lynott had decided that the following tour would have shows recorded that would be turned into a live album. During the tour former members were invited to play at various shows. The album and tour were well received, yet the band still split up once the tour finished. For much of the tour the band supported Whitesnake, who Sykes later joined.

The end of Thin Lizzy would soon be followed by the death of Lynott. His new band Grand Slam was unable to secure a record, whilst his drug habit lead to his premature death. His last recordings to be released were two John Sykes solo singles, and his collaboration with Gary Moore on the latter’s Run For Cover album.