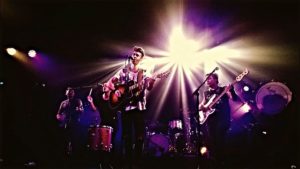 Our top 10 American Authors songs list digs deep into the music of an American band that has been active in the rock scene since 2006. Initially, the band’s original members became friends while attending the famous Berklee College of Music. As a result of a shared dream, they formed The Blue Pages band, that later evolving to American Authors. The members spent most of their time recording music while perfecting their skills. Their first appearance on a big platform was in 2010 where they opened for the electronic music group Cash Cash.

Later that year, the band released the single “Run Back Home” as The Blue Pages which was availed on iTunes. However, in 2012, the band marked its serious career with a name change to the famous moniker American Authors. Soon after, American Authors bagged a recording contract with Mercury Records, where the members released their debut single “Believer.” The song was received warmly by alternative rock lovers. It was also amazing for the band to see their debut hit receive some airplay on rock radio stations.

“Believer” also saw the band among the winners in the Annual USA Songwriting Competition in 2013. American Authors were quick to hit the studio to release their eponymous EP. An album under the title Oh, What a Life (2014) would serve as the perfect replacement for the band’s EP. The band’s name was quite popular among the lists of the top new artists, thanks to the great musicianship depicted in songs released on the debut album. American Authors were invited on NBC’s Today show, where they delivered an awe-inspiring performance of their most reputable hit song, “Best Day of My Life.”

The band returned to the studio to work on their sophomore release, What We Live For (2016). Lead artist Zac Barnett revealed that the album found the band contemplating what really makes the people choose to listen to American Authors. While the band wished to showcase how much it was growing over time, a preference to retain sounds in its former releases proved indispensable. However, the band didn’t hesitate in tagging Ryan Tedder of OneRepublic in co-writing the album’s songs. All these happened when the band toured with OneRepublic to support the pop-rock band’s album Native (2013). The tour also saw the band interact with the Irish rock band, The Script, famed for the hits “Hall of Fame,” “Superheroes,” “The Man Who Can’t Be Moved,” and “Breakeven.”

Seasons (2019), the third studio album, was released by the band in February 2019. The hit “Bring It on Home” from the album was featured on the trailer of The Biggest Little Farm, a documentary movie directed by the Emmy award-winning director John Chester. While the album was not as great as the band’s previous releases, it featured some reputable ballads and a notable change in music style. Through a sad tweet, the band notified the world of the departure of the lead guitarist James Adam Shelley from American Authors. Since then, the band has continued without a lead guitarist. The band has interacted and made music with other reputable artists throughout its career, including Seeb, Mark McGrath of Sugar Ray, Rob Thomas of Matchbox Twenty, and American rock band Santana.

Ushering us to the top 10 American Authors songs is the hit “Luck.” “Luck” was first released on the band’s eponymous EP, but later it was featured on the band’s debut album Oh, What a Life (2014). The band traveled to Tennessee for the song’s accompanying video. Amazingly, Colton James chose this same venue for the accompanying video to his country ballad “Date with Dixie.” Frontman Zac Barnett delivers heartfelt vocals on a catchy tune thanks to the stimulating instrumentation by the rest of the band. The singer revealed that he visualized the theme of a possible change in his mind as the video was being shot.

“Go Big or Go Home” is one of the best American Authors songs from the band’s sophomore studio album What We Live For (2016). The song, featured as the lead single from the band’s second album, finds the members giving one of the most energetic performances. This is majorly felt with the upbeat tune of the song and powerful vocals by Zac Barnett. Backing vocals and the song’s creative video makes it even more unique. The song was put to use by CBS Sports in ads to promote a college football televised schedule.

Seasons (2019) is the latest album by the American Authors. The album features great ballads that prove why the band still maintains quite a huge following in the rock scene. Its lead single, “Stay Around,” finds the band singing about lethargic times that usually culminate in the death of a relationship. The hand-clapping in the song adds to its catchy tune. Despite the band shifting its musical style seen on the previous albums to a darker vibe, American Authors retain solid musicianship, which is the band’s strongest pillar. J. J. Cale, in 2019 released his fifteenth studio album that shares a name with our number eight pick for the top 10 American Authors songs.

“What We Live For” is the third single and album-titled ballad of the band’s sophomore studio album. This title track features awe-inspiring beats that make it quite an easy ballad to vibe with. The lyrics to the song alludes to a relationship that finds the guy throwing himself fully in the arms of his lover. He also wishes they could free up and have fun since that is “What We Live For.”

Number six on our top 10 American Authors songs list is the melodic hit “I’m Born to Run.” The song is featured on the band’s sophomore album What We Live For (2016). American Authors bring the “you only live once” vibe with this ballad. The band advocates for holding back nothing to allow yourself to live life to the fullest. This includes doing all the things on your bucket list, including traveling to different cities worldwide. Without a doubt, the song remains to be one of American Authors’ timeless ballads.

“Deep Waters” brings us to one of the best releases by American Authors on their latest album, Seasons (2019). The song is an earnest pacifying rock ballad that serves as the perfect anthem of harmony and survival. “Deep Water” allows us to travel to the consciousness that we all need our close ones to aid us in overcoming the adversities in our lives. After all, everyone needs a shoulder to lean on during the tough times.

Oh, What A Life (2014) featured several decent ballads that helped the band put its best foot forward. “Hit It” is an upbeat rock ballad that towers over many hits in the album to become one of the best American Authors songs. The song’s lyrics allude to a missed romantic chance with a contemporary twist. “Hit It” was used in FIFA 14, a football simulation video game by EA Sports.

When someone mentions the term “Believer” in the rock scene, many will definitely reminisce the thunderous and successful hit by Imagine Dragons. However, those who have listened to the catalog of songs by American Authors can tell of the rip-roaring ballad under this title by the band. “Believer” is featured on the band’s debut album, Oh, What A Life (2014). The song’s lyrics carry words of hope that things will get better.

“Say Amen” is a collaborative hit between American Authors and Canadian rock artist Billy Raffoul. The song is featured on the band’s album, Seasons (2019). This sorrowful hit alludes to mourning a relationship that has come to an end. However, there is a feeling that the relationship can be salvaged only if the time can be turned back (which is impossible literally). Several other artists that have released a song under the same title include Finding Favour, Brian Free, Howard Hewett, and Panic! At The Disco.