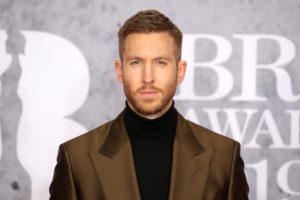 Before becoming known to the music fans as Calvin Harris, Scottish born and raised Adam Wiles grew up under the influence of electronic music. At fifteen years old, he recorded demos before releasing a pair of songs in 2002 under the entertainer name he had at the time, Stouffer. After recording and releasing a few singles, Harris moved to Scotland in hopes to learn more from the music industry there. It was slow going for him at first that offered few employment opportunities. The financially strapped Harris returned to his homeland where he made musical recordings before posting them on his MySpace page. The rise of his popularity on social media captured the attention of the newly founded Global Gathering, a dance festival booking firm. He became the company’s first signed talent and it would be at this time he would adopt his stage name as Calvin Harris.

The official start of Calvin Harris as a professional entertainer was in 2001 began with a humble enough beginning before he was in a position to finally release his first studio album, I Created Disco on June 15, 2007. It was later certified gold by the British Phonographic Industry (BPI). Since then, Harris has recorded and released four additional studio albums. He also has ten extended plays (EPs) to his credit, plus a mix album and forty-four singles to his credit. He’s also won a long list of critical acclaim, nominations, and awards for his work as a singer, songwriter, and dee-jay.

In 2011, Calvin Harris releases his third studio album, 18 Months. From it, the single, “Feel So Close,” became a song he reluctantly sang as it was his intent to perform music with leading lady vocals instead of his own. It had been the preference of Harris all along to simply perform the music in the background while singers he felt were more qualified to take center stage to perform the vocals. However, with Feel So Close he wound up providing the vocals to that song before having it released from his album.

It also became platinum among the recording industries belonging to the nations of New Zealand and the UK. In Brazil, it became diamond while in Italy, Norway, and Sweden it earned gold certification. As for the music charts, both the UK and US official dance charts peaked Feel So Close at number one. On the US Billboard Hot 100, it was charted at number twelve. Globally, it was a top twenty hit among most of the Oceania and European nations.

Ellie Goulding’s lyrical performance into “I Need Your Love” seemed to be that special touch that brought this song the critical praise it received from the music industry and its fan base. The instrumental delivery performed by Calvin Harris seemed to parallel perfectly with the fragility of Goulding’s soulful vocals. On the US Billboard Hot 100, I Need Your Love charted as high as number sixteen, but it topped the US Billboard Dance Club Songs chart, as well as a number of other official charts globally. It was one of eight hit singles that came from Calvin Harris’s third studio album, 18 Months, which was released in 2012.

Both Calvin Harris and Florence Welch combine their vocal talent for the single, “Sweet Nothing,” which is one of the tracks on his third studio album, 18 Months. In 2012, the electro-dance style romance song topped the US Billboard Dance Club Songs chart, as well as a number of other internationally recognized official billboards such as Australia, Ireland, Mexico, Scotland, and the UK. In Australia, Sweet Nothing became platinum-certified four times over while in Canada it became triple platinum. The US’s RIAA certified the single platinum twice over. It also became platinum with New Zealand and the UK.

In addition to becoming a multi-platinum certified single among the nations of Australia, Canada, the UK, and the US, “Feels” also became a certified platinum single with the music recognition industries from Belgium and New Zealand. The combined performance from Calvin Harris, Pharrell Williams, Katy Perry, and Big Sean brought forth one of the biggest hits in 2017, which came from the album, Funk Wav Bounces Vol. 1. It was the fifth studio recording released by Calvin Harris. The electro-disco meets funky hip-hop made this single one of those songs too catchy not to get caught up in it as a dance number. Among the nations of Australia, Belgium, Croatia, Iceland, Israel, Lebanon, Poland, the UK, and the US Billboard Hot Dance/Electronic Songs chart, Feels became a number one hit.

“One Kiss” was originally a standalone single, which was something Calvin Harris had become well known for. However, Dua Lipa does have it included in her 2018 debut album, Dua Lipa: Complete Edition. The mixture of disco, electro, funk, and synth sounds served to be as much of a highlight as Dua Lipa’s talented vocals that helped catapult this song into a hit that seemed to be a perfect fit for a summertime mood.

On the UK Singles Chart, it peaked at number one and stayed there for a record-setting eight weeks for that nation. It also charted number one among the majority of the official national charts belonging to other countries, including the US Billboard Dance Club Songs chart. On the US Billboard Hot 100, One Kiss charted as high as number twenty-six. It also became a multi-platinum certified success among many nations and has so far either physically or digitally sold well over eight million copies worldwide.

#5 – How Deep Is Your Love (featuring Disciples)

“How Deep Is Your Love” is the product result when Calvin Harris teamed up with the musical trio, Disciples in 2015. It became a number one hit on the UK Dance Singles Chart, as well as topping the official music charts belonging to the nations of Australia, Belgium, Greece, Hungary, Lebanon. Mexico, Netherlands, Romania, and Russia. On the US Billboard Dance Club Songs chart, How Deep Is Your Love peaked at number two, and at number twenty-seven on the US Billboard Hot 100. Among the fans and critics, the song was regarded as an ideal anthem for the dance club scene with the playful delivery that came through the vocal talent involved, as well as the mix of funk, jazz, and soul in a format that has become a Calvin Harris specialty.

Four-time platinum certified by Australia’s ARIA and USA’s RIAA, “Slide” was an internationally successful hit for Calvin Harris, Frank Ocean, and Migos when it was released in 2017. It belongs to his fifth studio album, Funk Wav Bounces Vol. 1. On the official music charts, Slide peaked within the top ten among many nations and peaked as high as number two on the US Billboard Rhythmic chart and in Slovakia. On the US Billboard Hot 100 and the US Billboard Dance Club Songs chart, Slide reached number twenty-five.

The pulse behind the backup handclapping, combined with the sultry mix of hip-hop and disco-grooved beats were more than enough to win over the fans worldwide as the platinum certifications for the song also came from the nations of Belgium, Brazil, Denmark, France, Italy, Mexico, New Zealand, Poland, Portugal, Sweden, Switzerland, and the UK.

From his fourth studio album, Motion, “Summer” was the biggest solo hit for Calvin Harris that featured his vocal talent. While Time recognized Summer as one of the worst songs released in 2014, it turned out to be the most listened to track according to Spotify as it had over 160 million plays by the channel’s listeners. While the critics may not have been sold so much on the singing performance by Harris, there was agreement the electro-disco instrumentation involved is what made Summer the internationally chart-topping hit it became.

#2 – This Is What You Came For (featuring Rihanna)

The mega-hit, “This Is What You Came For” was a dual performance between Calvin Harris and Rihanna that was released in 2016 and topped most of the music charts as it went straight to number one among the nations of Australia, Canada, Hungary, Ireland, Israel, Lebanon, Mexico, Russia, Scotland, Slovakia, South Africa, the UK, as well as the US Billboard Dance Club Songs chart.

On the US Billboard Hot 100, This Is What You Came For charted as high as number three. Rihanna’s vocals complimented the engineering genius that has become the Calvin Harris trademark that has continually put him in the winner’s circle for his talent. This song became a multi-platinum selling hit around the world with over twelve million copies of it sold, whether it be digitally or physically. In what may be a little-known fact, This Is What You Came For was co-written between Calvin Harris and Taylor Swift. She also lent her uncredited voice, singing backup to Rihanna’s lead vocals.

“We found Love” was a collaborated recording between Calvin Harris and Rihanna that was released from her sixth studio album, Talk That Talk. On the US Billboard Hot 100, it peaked at the top of its chart in 2011 and battled to stay there for ten weeks total. Full of techno-electro and dance-pop, the single also found the number one spot on almost every major official music chart there is on a global scale. To date, We Found Love is one of the most successful hit songs of all time since its release.

On the all-time US Billboard Hot 100, the song is currently charted at number twenty-seven as of 2018. In addition to receiving a multitude of platinum certifications that has so far seen over ten million copies of the song sold, it also received winning nods in 2012 from the International Dance Music Awards, the MTV Music Video Awards, and the 2013 Grammy Awards.