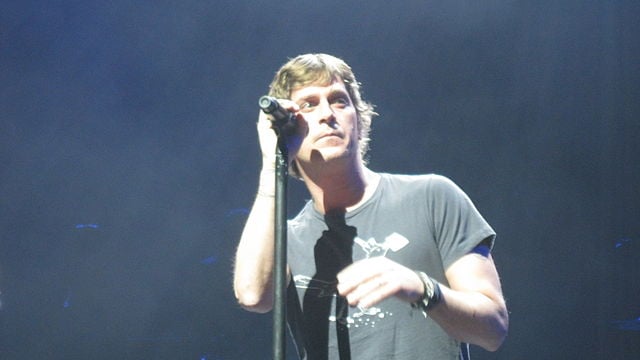 Our Matchbox 20 songs list looks  is a group of talented musicians  led by Rob Thomas. Along with Paul Douchette, Kyle Cook, and Brian Yale; Matchbox 20 formed a great American rock band in 1995 out of Orlando, Florida.  The band arrived during a very hot music scene in which new artists like Alanis Morissette,  Sheryl Crow and Oasis were tearing up the charts with huge hit albums. Competition was fierce at the time for radio airplay and Matchbox 20 held their own quite well. Adam Gaynor was the rhythm guitar player in the beginning and chose to leave the band in 2004. This opened the door for Paul Doucette to join in 2007, after Matchbox 20 took a three year hiatus. During this break, the lead singer, Rob Thomas pursued a solo career and released the album Something To Be. The band came back together in 2007, and began a tour of the U.S.. in January 2008. They finished up that tour in late 2008 and Rob Thomas set out to work on his second solo album entitled Cradlesong.

Even with the break that Matchbox 20 took, they have been an incredible band with outstanding, multi-platinum albums, and amazing music. Their first album, Yourself or Someone Like You, debuted in 1996 and went 12x platinum. In 2000, they released their second album, Mad Season, which went 4x platinum and hit number three on the Billboard 200. 2002 brought the release of the 2x platinum album, More Than You Think You Are. In 2012, Matchbox 20 released their fourth studio album, North. This album hit number one on the Billboard 200. They also have a compilation album, Exile on Mainstream.

From those Matchbox 20 albums came many killer songs. We are going to visit, and even listen to, their top 10 songs. Brace yourself, you are about to go on one emotional but awesome journey!

To start off our Top 10 Matchbox 20 songs is

We open up our Matchbox 20 songs list article with  a song that was released in 2007 on their compilation album, Exile on Mainstream. It premiered on VH1s top 20 countdown in September 2007. How far We’ve Come peaked on the Billboard charts in the number thirty-two spot and stayed on the charts for twenty-three weeks. It is a fast paced song that reflects and fits a lot of negative things that the world has gone through over the years. It also celebrates the accomplishments of making it through those terrible things, including 2020 and COVID-19. A lot of people listened to this song on New Year’s Eve 2020 and reflected back on everything that the United States went through.

The song “Disease,” hails from Matchbox 20s third studio album, More Than You Think You Are. The album was released in November 2002. “Disease,” peaked at number 30 on the Billboard charts in December 2002. The song kicks off with some amazing guitar playing. “Disease ,”is a little bit ‘harder’ than our number ten song. Matchbox 20 lead singer Rob Thomas wrote this song with Mick Jagger. It is an outstanding song and one of the many favorites that I have. I have listened to Matchbox 20 since the beginning of their career and I have also enjoyed Rob’s solo career.

“Bright Lights,” is another song off of the More Than You Think You Are album. Bright Lights was on the Billboard charts in December 2003 at the number twenty-two position. This song begins with Rob Thomas on piano and starts out as a slower, ballad style, song. Though the pace does pick up slightly as the song goes along. The live video has a lot of energy and focus on the band. There is outstanding guitar playing in the middle and towards the end of the song. Not a solo, but definitely stands out above the other instruments.

The number 7 song on our Top 10 Matchbox 20 songs was released in 1998. It is from their debut album Yourself or Someone Like You, which is a multi-platinum album. Back To Good was the fifth song released and topped the Billboard charts in April 1999 at number fifteen. One of my favorite Matchbox 20 songs, it is laid back and centered on a relationship. Maybe a relationship from the past that didn’t end so well and you wish you could get back on good terms with the other person. One of many Matchbox 20 songs that will tug at your heartstrings, just a little bit, and that so many of us can relate to.

Another outstanding song off of their debut album, Yourself or Someone Like You is “Real World,” which peaked at number nine in July 1998. The song is about being someone else. The beginning of the video is kind of strange; Rob Thomas is walking through a bowling alley with a camel. In an interview that Rob Thomas did, he said, “the camel loved me and wanted to nuzzle.” Real World is a catch song with a great beat and excellent guitar playing. Rob Thomas brings a lot of feeling to everything he sings. You can tell that he puts his all into everything he does, musically. From the writing of the songs, to the singing of the songs.

At the  halfway point on our the Top 10 Matchbox 20 songs we turn to the song “Push.” The great track “Push,” was the second single off of their 12x platinum album Yourself or Someone Like You. The song was released in May 1997 and peaked at number five on the Billboard charts in October. Rob Thomas wrote this song about himself and a bad, manipulating, relationship that he was involved in during high school. It focuses on emotional confrontation, not physical, like one might think. Another, slower tempo song that a lot of fans can relate to. You can feel his pain and anger in the vocals. Beautiful guitar solo at the beginning of the song.

These last four Matchbox 20 songs all deserve to be in the number one slot. If You’re Gone was released in October 2000 and in January 2001 was number four on the Billboard charts. It is from their album Mad Season. Rob states in a VH1 interview, “I wrote the song as a kind of letter to her.” He was speaking about a girl he wanted to marry that decided being with a musician was not going to work for her. Rob Thomas wrote the song during one of the Matchbox 20 breaks and was not originally going to be added to the Mad Season album.

At number three on our Matchbox 20 songs list is one of my all time favorite Matchbox 20 songs entitled “Unwell.” This song was the second single released, in February 2003, from their third album More Than You Think You Are. It peaked at number four in July 2003 and stayed on the Billboard chart for fifty-four weeks. As with many of the Matchbox 20 songs, “Unwell,” was written by Rob Thomas. A lot of Matchbox 20 songs are centered around personal experiences that Rob has gone through and this is one of them. In multiple interviews he states that he wrote the song because, “he didn’t feel comfortable in his own skin.” He felt crazy and very alone. How many of us have been in that exact position?

Coming in at number two on our Top 10 Matchbox 20 songs is the track entitled “3 AM.” Peaking at number three in February 1998. this song is from their album Yourself or Someone Like You. Everyone assumes that this is a “love” song or a song about a romantic interest. But according to www.songmeaningandfacts.com it is a song about his mother when she was battling cancer. “3 AM,” is a very powerful song that pulls at your heart strings and makes you really think about life and the things that we all go through. It means something a little different to everyone who listens to it.

The number one song on our Top 10 Matchbox 20 songs, was number two on the Billboard charts in July 2000. “Bent,” was the first single released from their Mad Season album, which is multi-platinum. It is a killer rock ballad and is their biggest hit. It was their only song that reached number one on the Hot 100. In an interview on VH1 Storytellers Rob says, “this was my first conscious love song.” The song centers around two individuals who are “screwed-up.” Being together doesn’t solve the messed up issues, but they are able to go through it together and it works for them. The beginning of the song has an outstanding guitar solo. “Bent,” is definitely a song that we all can relate to and it my number one song as well.

Matchbox 20 may not be a band who has released a ton of albums, but the ones that have released are outstanding and three out of the four have gone multi-platinum. If you have never listened to Matchbox 20, you have no idea what you are missing. The powerful, full of emotion, vocals from Rob Thomas are amazing. The guys have really made a huge name for themselves without having to record ten albums. They put a lot of though, feeling, and talent into every song they release and every album that they put together.