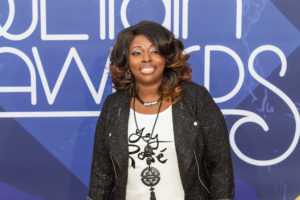 Born and raised in Columbia, South Carolina, before becoming Angie Stone, she was known by her family and friends as Angela Brown. Her singing talent began while singing gospel music at her local church as a member of its choir. When she was sixteen years old, she formed a rap band in 1979 with two other members, Cheryl Cook and Gwendolyn Chisolm. Together, they were known as The Sequence and were among the first female rap artists in the industry. After experiencing solid success during the early 80s, the trio’s house party sounds became overshadowed by grittier street-style rap groups that were starting to come into the scene. In 1985, The Sequence disbanded, which resulted in Angie Stone joining another rap group, Mantronix, which specialized in an electro-funk meets hip-hop style of music.

Angie Stone moved on as a solo act as of 1999 and had since released eight studio albums and a compilation album. At this point, her vocal performances began to lean more towards the R&B genre with one soulful recording after another. She still maintained her hip-hop style, but more melodic, which is contributed to learning how to adapt to the constantly changing trends that have played a role in sculpting her career to what it is today.

Angie Stone’s fifth studio album, which was released on November 23, 2009. “I Ain’t Hearin’ U” was released as a single and peaked as high as number fourteen on the US Billboard Adult R&B Songs chart and at number forty-two on the US Billboard Hot R&B/Hip-Hop Songs chart. Loaded with classic sounds and backup that make this song an easy soulful favorite, Stone’s harmonic narrative was the vocalist at her best

On September 27, 1999, Angie Stone’s debut album, Black Diamond, is released. From it, “Everyday” was the third single, which charted as high as number fifty-two on the US Billboard Hot R&B/Hip-Hop Songs chart and at number eighty on the UK Singles Chart. Oozing with soulful charm, the sultry performance that came from Stone served as a powerful notice against the subject of her song that a woman scorned lives with the scar every day and will look for payback one way or the other.

The neo-soul single, “Life Story” was the second of three singles that came from Angie Stone’s debut album, Black Diamond. On the UK Hip Hop and R&B Singles Chart, the song peaked at number six. It was also a number twenty on its Dance Singles Chart and a number twenty-two hit on the UK Singles Chart. The song was also popular enough to climb to number eighteen in Belgium. Both as an easy listening piece and an adult contemporary song full of soul, Life Story served as a beautiful story told by a narrator who wishes to share more than simply her story.

The sleek, sultry duet performance shared between Prince and Angie Stone reached number fifty-nine on the US Billboard Hot 100 in 2001. The mix of emotion soaring through the song from start to finish seemed to reach an angry climax when Prince’s guitar solo ravaged what seemed like a momentary bout of rage. It served as the man seeking to win the heart of a woman who needs to contend with certain issues that make her feel lost in a situation she knows she needs to be rescued from.

From Angie Stone’s fourth studio album, The Art of Love & War, which was released on October 15, 2007, was the single, “Baby.” Performed with Betty Wright, the soulful delivery of the song peaked as high as number one on the US Billboard Adult R&B Songs chart and at number three on the US Dance Club Songs chart. On the US Billboard Hot R&B/Hip-Hop Songs chart, it climbed to number twenty-two. As a disappointed woman who was abandoned by a man who took advantage of the friendship, he had with her before selfishly moving on without any rhyme or reason, Stone’s melodic delivery was well complimented with Betty Wright’s

Blue’s third studio album, Guilty, was released on November 3, 2003, and featured the hit single, “Signed, Sealed, Delivered I’m Yours.” Blue, Angie Stone, and Stevie Wonder performed the song together and it peaked at number eleven on the UK Singles Chart. Throughout Europe, Australia, and New Zealand, the collaborated performance by the three artists saw the song become a top forty hit on most of their charts. While it did not perform as well in the US as Stevie Wonder’s original when he first released it as a solo artist in 1970, it’s still one of the best R&B songs that are packed with rhythm, blues, and soul.

From Black Diamond is “No More Rain (In This Cloud),” which served as her first single. On the US Billboard Adult R&B Songs chart, this song, heavy with rhythmic soul, climbed all the way to number one. On the US Billboard Hot R&B/Hip-Hop Songs chart, it reached number nine and it charted at number fifty-six on the US Billboard Hot 100. No More Rain also made an impression on the Netherlands, as it charted as high as number eighteen on the Dutch Top 40. It served as an easy listening pick me up song, mixing bittersweet memories with the need and desire to get up and move on.

Mahogany Soul was Angie Stone’s second studio album, which was released October 16, 2001. “Brotha” was the first single released from it, which reached as high as number three on the US Billboard Adult R&B Songs. and at number thirteen on the US Billboard Hot R&B/Hip-Hop Singles chart. In the UK, it peaked at number nine on its Hip Hop and R&B Singles chart. Among the nations of Belgium and Netherlands, it was a top ten hit. The US Billboard Hot 100 charted Brotha at number fifty-two. The song was an homage Angie Stone delivered in memory of Colin Powell, Muhammad Ali, Malcolm X, Martin Luther King, Jr., and Marvin Gaye.

“I Wanna Thank You” was a duo performance between Angie Stone and Snoop Dogg that became a chart-topping success on the US Billboard Dance Club Songs chart. The genius blend of disco, funk, R&B, and contemporary soul made this song rather popular among many dance clubs around the world. In Belgium, it peaked at number five and it was a number nine hit on the UK Hip Hop and R&B Singles chart. On the US Billboard R&B Songs chart, I Wanna Thank You charted at number twenty-two.

From Mahogany Soul, “Wish I Didn’t Miss You,” was the second of four singles that realized chart success and was the most successful. It is also Angie Stone’s best-recognized hit as a solo artist. On the US Billboard Dance Club Songs chart, it peaked at number one, as well as on the Australian Club Chart. Throughout the European nations, Wish I Didn’t Miss You charted within the top forty among most of the charts, including a number seven climb on the UK Hip Hop and R&B Singles chart. On the US Billboard Hot R&B/Hip-Hop Songs chart, it charted at number thirty-one and it appeared at number seventy-nine on the US Billboard Hot 100. Classified as a smoldering delivery of a heartache theme by AllMusic, this song was Angie Stone at her finest. With the British Phonographic Industry (BPI), Wish I Didn’t Miss You became certified silver.