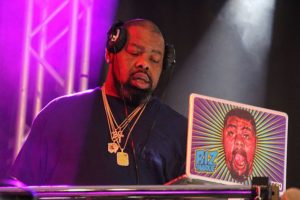 Our Top 10 Biz Markie songs look back at the songs of a 1980/90’s rap artist who hit the big time with the mega hit “Just A Friend,” in 1989. Biz Markie joined the rap game when the industry was relatively young and free in terms of style and approach. What set him apart from other rappers of his era was his infusion of humor and well thought out melodies in contrast to the guns and gangster style of many other rappers of his time. Biz Markie drew much of his inspiration from Benny Hill and Richard Pryor, who were his favorite comedians. Biz Markie released five albums in his career, and is considered as one of hip-hop’s true greats.

Biz Markie was at the centre of controversy in 1991 for using a 20 second unauthorised sample from Gilbert O’Sullivan’s 1972 hit single “Alone Again Naturally” for his track “Alone Again.” Gilbert O’Sullivan’s lawsuit was upheld in a court of law in what was to be a landmark rule that sent shock waves through the hip-hop scene. Biz Markie alongside Warner Bros Records were ordered to pay $250,000 in damages to Gilbert O’Sullivan and, as a result, samples would have to be cleared by the original artist and appropriately paid for. In this article, we are going to look at some of Biz Markie’s songs that cemented his legacy as a true hip hop great.

The number ten song on our list of Biz Markie’s greatest songs comes from the Biz Markie’s fourth studio album All Samples Cleared. The song is about the dangers of pursuing attractive underage girls who look like adults. The Slick Rick sample and the lyrics to the song are amazing.

“Pickin’ Boogers,” is one of the best Biz Markie songs of all time. The track features some great instrumentals from Marley Marl and comes from his 1988 album Goin’ Off. The song is written by Big Daddy Kane and was initially released as a 12’ single back in 1987. The Big Daddy Kane lyrics are juvenile and the track has been sampled by a couple of artists including Nas and Pete Rock in Verbal Murder 2.

There is no better way to show love for your favorite mall in your hometown than releasing a great single and dedicating it to the mall. “Albee Square Mall” was recorded in 1988 and it features TJ Swan in the lyrics to add more flavour in their lovely serenation of their favorite mall. Albee Square Mall was located in downtown Brooklyn and the duo did a good job in marketing the mall.

Biz Markie’s album Goin Off was a classic and no wonder so many songs appear on our list. “Make The Music With Your Mouth” was produced from an incredible instrumental that samples a 1970 song by Isaac Hayes called, “Ike’s Mood.” The track has been sampled numerous times over the years most famously by Marley Marl. The song has also been sampled by Jay-Z and Mya in their hit song “Best Part of Me” part 2.

Biz Markie’s album, The Biz Never Sleeps is one of his most underrated albums of all time. It changed the way samples were being cleared and used. “Spring Again” is one of my most favorite songs from the album. The 1989 song talks about how people wait for spring once winter is over. The track is sampled from three track including, “Now That We Found Love” by Third World, “Funky Drummer” by James Brown and Lee Dorsey’s “Get Out Of My Life Woman.”

Its crazy how Marley Marl and Big Daddy Kane are not given enough credit for their work on Biz Markey’s album, “Goin Off”. “Biz Is Goin Off” is sampled from the track “Double Barrel,” which was written by Dave and Ansel Collins. The mid-tempo instrumental in the song is incredible and allows Biz Markie to showcase his amazing rap style.

“Alone Again,” features on this list due to its role in changing the music industry. It is the infamous song that led to Biz Markie losing $250,000 for using an unauthorized sample from Gilbert O’Sullivan’s song “Alone Again Naturally.”

The number three song on our list comes from Biz Markie’s 1988 album, Goin Off. the song Along with his hit song “Just A Friend,” “Vapors” is one of the songs that Biz Markie is associated with most. The track talks about Biz Markie and his crew’s life before they got famous and how people thought they wouldn’t amount to much in their careers. In the song, he therefore tells them that they are now catching vapors since Biz and crew are successful artists.

1988 was a significant year for hip-hop. More people were appreciating the new rap styles and rappers like Biz Markie were flourishing. “Nobody Beats The Biz,” which features TJ Swan is one of the most popular songs by Biz Markie. With nearly 100 samples, it is arguably, the most sampled songs of all time. The song has been sampled by famous musicians such as Tupac, A Tribe Called Quest and Janet Jackson among many others. The chorus of the song is adapted for an electronic store which was called, “Nobody Beats The Wiz.” Although the store later changed its name to “The Wiz,” its safe to say that it is part of the history of a classic Biz Markie song.

“The Biz Never Sleeps” is considered a hip-hop classic album because of this song. “Just A Friend” was the lead single from the famous album that was released in 1989. The track talks about the romantic frustrations of a man who is in love with a lady. However, the man realises that the lady is also romantically involved with another man who she claims to be, “Just A Friend.” The song ends with Biz Markie stumbling on the girl kissing with another man. “Just A Friend” peaked at position 9 on the US Billboard Hot 100 and was certified platinum by the RIAA. Although it was one of his best songs, the rapper admitted the track didn’t make him as much money compared to its popularity.