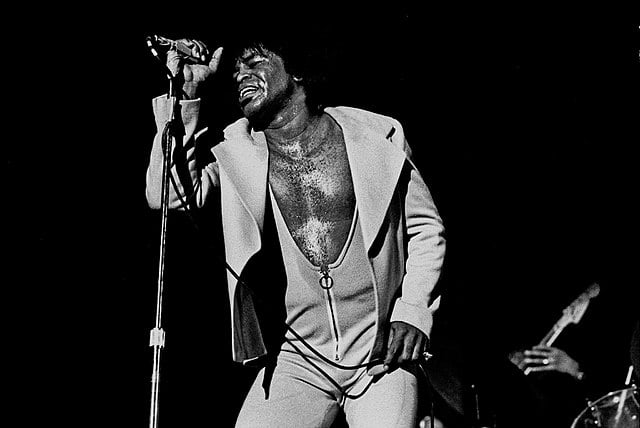 If there was ever one voice that could synthesis the greatest elements of soul music, rhythm and blues and rock and roll into one single scream that would knock you out cold, it was Mr. James Brown. Often referred to as the Godfather of Soul, James Brown rocked harder than almost any other single performers in the 1960’s. James Brown was Prince, Bruce Springsteen and Elvis Presley fused into one killer performer. James Brown defined the word funk. He defined the word entertainer. His live shows were all killer from the moment he first took the stage in the 1950s all the way into the late 20th century.

James Brown released more music than just about any other popular music artist in history. From the time he released his first album in 1958 entitled Please Please Please

up to his final release in 2002 entitled The Next Step, James Brown had released sixty three studio albums. That did not include the fifteen live albums that he also released. In addition, there were also forty nine compilation albums issued showcasing the music of James Brown. While his massive recorded output of vinyl albums and CDs stands as an incredibly impressive achievement, the sheer amount of singles that James Brown released throughout his career stands second to no other artist. During his forty two years as a recording artist, James Brown released one hundred and forty four singles.

Our 25 Essential James Brown songs list is just a very small peak into the musical career of James Brown. It focuses on most of the big hits with just a few surprises. The first 15 songs are labeled by title, date and album release. The top 10 James Brown songs section includes more info and the songs themselves.

From the album The Amazing James Brown. Released in 1960.

From the album The Amazing James Brown. Released in 1960.

From the album James Brown Sings Raw Soul. Released in 1966.

From the album James Brown Sings Raw Soul. Released in 1967

From the album Super Bad. Released in 1970

From the album Prisoner of Love. Released in 1963.

It’s quite a jump between song number eight, “I Love You Yes I Do,” and song number nine, “The Boss,” on this 25 Essential James Brown songs list. The great down and dirty grooving song “The Boss,” was released on the soundtrack to the movie Black Caesar.

The film starred Fred Williamson. The song was released in 1973.

If this classic James Brown song sounds similar to “The Boss,” it’s because it was released the same year and was also intended to serve as a soundtrack to a film. However, the music was rejected by the film company and instead was released as a James Brown studio album. Nonetheless, the album and the song “The Big Payback,” became on of the most successful releases James Brown ever issued. The song hit number one on the U.S. Billboard Rhythm & Blues Charts.

While on the topic of soundtracks we turn to the big hit “Living In America.” The classic song was released in 1985 on the soundtrack to the Sylvester Stallone film Rocky IV.

The film and soundtrack were released in 1985. At the time there a great trend towards Nationalism in the United States under the leadership of President Ronald Reagan. The Cold War was peaking and the film Rocky IV

capitalized on the Cold War between the United States and the Soviet Union. The James Brown song “Living In America,” was perfectly placed in the film.

The popularity of the film helped James Brown celebrate his return to the mainstream top 40 for the first time in ten years. It propelled him back into the spotlight and unleashed an entire new generation of fans to discover the music and history of James Brown.

One of the most important musicals elements that fueled the music of James Brown, was the ability to compose a song that utilized no chord changes. So many James Brown songs that were released after “Cold Sweat,” followed the various rhythmic changes and soulful vocal improvisation over a single chord composition that defined the music of “Cold Sweat.”

The great James Brown song “Give It Up or Turnit a Loose” was released in 1969. The song hit number one the U.S. Billboard Rhythm & Blues Charts. It also was a top 20 hit on the U.S. Mainstream Top 100. The song appeared on the James Brown album Soul Classics.

“Papa’s Got A Brand New Bag,” hit number one on the U.S. Billboard Rhythm & Blues Charts. It was also a top 10 hit on the Billboard Hot 100 peaking at the number eight position.

There was no doubt that James Brown’s classic track “I Got You (I Feel Good),” would be our  choice for the number one spot on our 25 Essential James Brown songs list. Often referred to as simply “I Feel Good,” the classic song hit number one on the U.S. Billboard Rhythm & Blues charts in 1965. It was also James Brown’s highest charting single on the U.S. Billboard Hot 100 peaking at number three. His next biggest hit would come twenty years later when he hit the number four position on the Billboard Hot 100 with “Living In America,” in 1985.