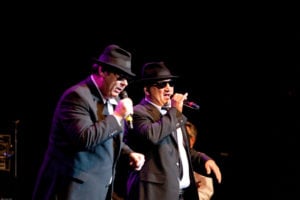 Comedians Dan Aykroyd and John Belushi officially formed The Blues Brothers in 1978 as part of their musical sketch for the weekly program, Saturday Night Live. In character, Akroyd was Elwood Blues while Belushi was Jake “Joliet” Blues. With the band assembly help of Paul Shaffer, the duo debuted, in character, as a musical guest to open the show with “Hey Bartender.” Later in that episode, it was “Soul Man.” That same year, the band’s debut album, Briefcase Full of Blues, was released and they performed as the opening act for the Grateful Dead in San Francisco. The popularity of The Blues Brothers brought about the 1980 film named after them, which also starred the two comedians as their band-name personas.

On March 5, 1982, John Belushi, aka Jake Blues, died as a result of a lethal combination of drugs that proved to be too hard for his body to recover from. His death hit the Hollywood community and his fans hard, but The Blues Brothers kept the band going. John’s younger brother, Jim Belushi, joined The Blues Brothers as Zee Blues, along with John Goodman as Mighty Mack McTeer. These two actors, along with Akroyd, performed together on Saturday Night Live on occasion, as well as for charitable and political causes Dan Aykroyd’s younger brother, Peter Aykroyd, also took part in the band. This new formation of The Blues Brothers performed at the 1997 Super Bowl halftime show to promote their upcoming movie, Blues Brothers 2000, which was released in theater on February 6, 1998. This sequel was a movie that paid homage to John Belushi, John Candy, and Cab Calloway, who were all in the original film, but passed away before the making of the sequel. Junior Wells, who was also in the original and in the sequel, died a month before the movie was released.

Formed in 1978 and never officially disbanded despite the change in its roster, the Blues Brothers have released two studio albums, five live albums, four soundtrack albums, eleven compilation albums, and twelve bootlegs. There were five charted hits that came from the band, but the group’s greatest achievement wasn’t strictly in their music. It was in their ability to bring people together for the pure purpose of entertainment, and not just for their audience. When a group of actors and musicians do what they do on their own accord because it’s fun for them, this is where the true heart and soul of quality music is at its best.

Heavy with hard-hitting jazz, The Blues Brothers’ performance of “Going Back to Miami” starts off with a dedication to the city and its location before John Belushi breaks into his vocal performance. Highly energetic and rich with trombone, trumpet, and a steady pulse of guitar riffs, Going Back to Miami was, and still is, one of those songs that keep listeners coming back for more. The soundtrack, Made in America, was recorded live by The Blues Brothers, which served as the group’s second album release.

1962’s original “Do You Love Me” was performed by the Contours and became a number three hit on the US Billboard Hot 100. In 1988, it appeared on the chart again, this time peaking at number eleven. With James Brown as the lead vocalist for The Blues Brothers for the song, the live recording is featured on the Made in America soundtrack that was released in 1980. While it may not be as hard-hitting as the original, this version of Do You Love Me is no less impactful with its soul-infused, jazzy delivery.

#8 – Expressway to Your Heart

The Blues Brothers performed “Expressway to Your Heart,” and released it as a single in 1981. It was their version of the 1967 original by the Soul Survivors. The original peaked at number three in the US Billboard Hot R&B/Hip-Hop Songs chart and at number four on the US Billboard Hot 100. For the Blues Brothers, the song did not chart, but it is still ranked among their best. Brilliant from start to finish, Akroyd and Belushi hit this song home with their vocal range.

From the live album, Briefcase Full of Blues, the cover performance of Flip, Flop and Fly by The Blues Brothers may not have been as hippy as Elvis Presley’s 1956 cover, nor as deep as Big Joe Turner’s 1955 original, but it still had its jazzy impact. The harmonica play in the song was absolutely classic.

While their version didn’t become the chart-hitting success as Johnny Lee’s in 1983, it actually served as an inspirational trigger for him to release it as a single, as well as an album. However, the most memorable performances of Hey Bartender still belong to The Blues Brothers as it was their SNL coverage of the song that spiked the popularity of the weekly series to it’s all-time high.

#5 – Everybody Needs Somebody to Love

Fast-paced and thoroughly enjoyable, “Everybody Need Somebody” was one of the songs performed in the 1978 film and is on the 1980 soundtrack that was released afterward. Originally written and recorded by Solomon Burke in 1964, the single failed to chart at the timing it came out. When it was covered by Wilson Pickett in 1966, it charted as high as number twenty-nine on the pop charts and as high as number nineteen on the R&B chart. In the film and on the soundtrack, Jake “Belushi” Blues as the lead vocalist was a performer on fire that electrified the song, which was rated as one of the favorite scenes in the movie by the fans.

Originally released in 1956 as a vocals-only doo-wop song by the Chips, “Rubber Biscuit” was covered by The Blues Brothers in 1978 when they opened for their fellow comedian, Steve Martin, and his live show in Los Angeles. This song was among a collection of 1950s and 1960s singles that were featured on the band’s debut album, Briefcase Full of Blues. The album was recorded live during the band’s performance, then released on November 28, 1978. Comedic from start to finish, Rubber Biscuit served as one of those singles that’s designed for pure fun and silliness. On the US Billboard Hot 100, the song was enjoyable enough to reach number thirty-seven in 1979. In Canada, it charted at number forty-four on its RPM Top Singles chart.

In the 1978 movie, The Blues Brothers’ performance of “Gimme Some Lovin'” didn’t seem to win any hearts while the boys were on stage, but on the US Billboard Hot 100, it received enough love to chart as high as number eighteen in 1980. It also charted at number twenty-two on RPM Canada Top Singles. Originally, the song was recorded and released by Steve Winwood in 1966 and it was a number seven hit for him.

For The Blues Brothers, “Soul Man” served as their most recognized hit as a band on the US Billboard Hot 100 as the song climbed up to number fourteen in 1979. On Saturday Night Live, when it was performed for the first time by Dan “Elwood Blues” Akroyd and John “Jake Blues” Belushi it was so electric that this remains one of the most beloved SNL episodes of all time after it aired in 1978. The original release of Soul Man was in 1967 by Isaac Hayes and David Porter, which became a number two hit on the pop chart after it was performed by Sam & Dave.

In 2019, the song was chosen for preservation by the National Recording Registry for its cultural, historical, and aesthetic significance. It also received a Grammy Award in 1968 for best Rhythm & Blues Group Performance, Vocal or Instrumental. When The Blues Brothers covered this song on SNL, as well as on tour, both the group and the fans would instantly respond to the song for its spiritual personality.

Complete List Of Bullet For My Valentine Albums And Discography