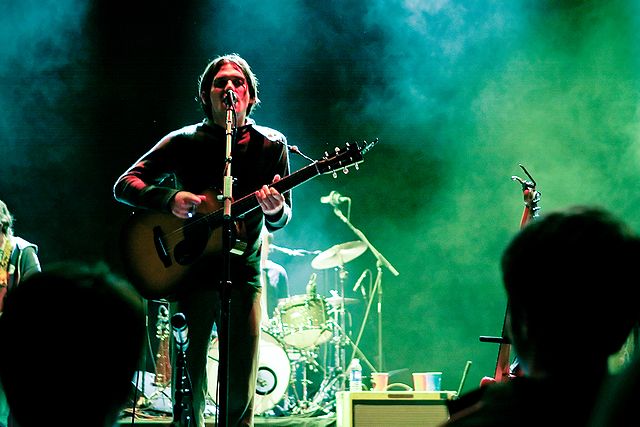 Their 2002 album Lifted or The Story Is in the Soil, Keep Your Ear to the Ground  would become their biggest selling record to date selling over 300 thousand records as the bands popularity continued to increase. Their biggest selling album of their career would be released in 2005 entitiend ‘m Wide Awake, It’s Morning that sold over half a million copies. The group has since released four more albums with their latest released being issued in 2o20 called Down in the Weeds, Where the World Once Was. Our Top 10 Bright Eyes Songs Ranked list picks ten of their best to help turn you on to this great band.

Continuing with our Bright Eyes songs list we turn to the song “Shell Games.” The song was released on the album The People’s Key. The album was released in 2011. The People’s Key was the band’s ninth studio album. This is a fabulously produced songs that echos so many classic 1970s bands. It’s one of those songs that you swear you have heard so many parts of the song before somewhere but you just can’t pinpoint them exactly. Take a listen and you will completely get what we are saying. In the end, it’s simply a fantastic song. We love this one. It sounds like the entire history of rock and roll is all jammed into this one.

In the number eight position on our Bright Eyes songs list is the very tempestuous song “Persona Non Grata.” This fantastic song was issued on the album Down in the Weeds, Where the World Once Was. The album was released in 2020 making it the band’s most recent release. This is a deep harroring song produced with a great piano track and some deep emotional vocals by Conor Oberst.

At the number seven spot on our Bright Eyes songs list is the track “Four Winds.” The song was released on the album entitled Cassadaga. The album was released in 2007. The song “Four Winds,” was released as the first single from the album. It’s amazing how Bright Eyes could sound so different at time. There is a great old school  country rock Poco style flavor to the song making the band sound like they recorded this one in 1972. You have to watch this great video below.

# 5 – When the President Talks to God

At the halfway point on our top 10 Bright Eyes songs list we turn to the gran protest song “When the President Talks to God.” The song was released in 2005 as a protest against the United States President at the time, President George W Bush. Without getting into the particular policies or issues that the group Bright Eyes were protesting, they were one of the few musical artist not afraid to write protest songs against the George Bush administration. The others being most notable Bruce Springsteen and Sheryl Crow.

Moving along on our Bright Eyes songs list we turn to this rocking slightly techno style with some great guitar riffs song called “I Will Be Grateful For This Day.” Just love those drums sounds before the chorus. This is really a great song and recording. Its heavy at times, its melodic, the lyrics are brilliant and there even a touch of The Beatles within the song. It’s contains all the mighty ingredients that made Bright Eyes such a loved musical act in the 2000s and 2010s.

At number three on our Bright Eyes songs list is one of the most compelling songs the band ever released. The song“First Day of My Life” was released as a single from the album I’m Wide Awake, It’s Morning. The song was not released a s single in the United States but it was in the UK where it became a top 40 hit peaking at number 37 on the United Kingdom Singles Charts. The musicians featured on the song included Conor Oberst on vocals, Jesse Harris on guitar and Tim Luntzel on bass.

As we close in on the number one spot on our top 10 Bright Eyes songs list we present the song “Take It Easy (Love Nothing).”  This song was released on the album Digital Ash in a Digital Urn released on January 25, 2005. The same day that the other Bright Eyes album I’m Wide Awake, It’s Morning was released. The song “Take It Easy (Love Nothing).”  was the first single released from the record. It was a huge hit reaching the number two position on the US Billboard music charts.

We close out our top 10 Bright Eyes songs list with the artists narrowing song “Lua.” The song was released on the album I’m Wide Awake, It’s Morning. The album was released in October of 2004. The song “Lua,” was placed as the album’s opening track because this was one one they wanted the listeners to hear right away.It’s a song about depression and other issues that two people are dealing with as the song ads a very emotional punch to the issues.  This is such an extraordinary song it has been used in various television shics and most recently was utilized in the 2021 BBC documentary Can’t Get You Out of My Head.. This is the groups highest charting song in the United States where it hit number one on the US Billboard sales music charts.