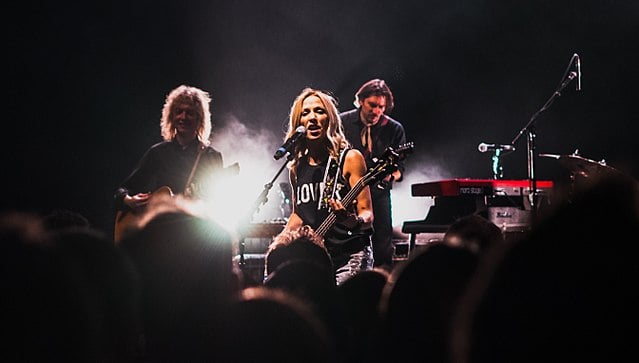 Our Sheryl Crow albums ranked list takes a look at the ten studio albums Sheryl Crow has released so far throughout her marvelous career. We are big fans of Sheryl Crow. She’s always reminded us of classic 70s artists like Elton John in which you waited eagerly for every new album and was never disappointed. Sheryl Crow burst onto the scene in 1993 becoming a household name when her debut album Tuesday Night Music Club won three Grammy Awards. Sheryl Crow has been pretty consistent throughout her career releasing albums while never taking too long of a time in between records. Our Sheryl Crow albums ranked list looks at her 10 studio albums she released from 1993 to 2019. There was also a Christmas album entitled Home for Christmas which was released in 2008 and a few great live albums starting with Live from Central Park that was released in 1999 along with Live at Budokan in 2003 and Live the Capitol Theater in 2018.

We open up our Sheryl Crow albums ranked list with her 2008 album entitled Detours. The Detours record was Sheryl Crow’s sixth studio album. This was a great rock and roll record that was nominated for a Grammy award. Six singles were released from the album including the lead single “Shine over Babylon,” which was a top 10 hit on the US Billboard Adult Alternative list. The album was political in nature as Sheryl Crow was one of the few artists who was not afraid to speak out against the George Bush Administration. That’s very evident in the album’s opening track “God Bless This Mess.” The album’s third track “Love Is Free,” was also inspired by the effect that Hurricane Katrina had on the people of New Orleans. It was nice that an artist was speaking out unafraid of the feedback she would get from people who did not agree with her.

At number nine on our Sheryl Crow albums list is her album Be Myself. This was Sheryl Crow’s tenth studio album. The album followed up her only country album. So many Sheryl Crow fans were very happy with the release of Be Myself. Only one single was released from the album entitled “Halfway There.” Standout tracks included “Alone In The Dark, Be Myself, Love Will Save the Day and Heartbeat Away.” The album was released in March of 2017. It was produced by Sheryl Crow and Jeff Trott.

Continuing with our Sheryl Crow albums list we present her most recent album entitled Threads. Every album on the Sheryl Crow list is fantastic and so it actually really becomes tough to put them in any sort of order. Especially this fantastic duet album. Seven singles were released from Threads. And that makes us happy because in 2019 many artists are not releasing singles anymore, so good job Sheryl Crow. So many standout tracks were released on this album including the songs “Redemption Day, Live Wire, Prove You Wrong, Still the Good Old Days,” “Everything Is Broken,” which was written by Bob Dylan and “The Worst,” written by Mick Jagger and Keith Richards. This was a long album with 17 songs clocking in hour and 14 minutes long which is just about the maximum amount of time one can get on a CD.

A fantastic Sheryl Crow album that we highly recommend. There was so many collaborators on this record artists such as Stevie Nicks, Bonnie Raitt, Eric Clapton, Johnny Cash in an old recording, Neil Young, Keith Richards, Kris Kristofferson, Joe Walsh, James Taylor and Vince Gill. A fantastic duet album with a perfect title and such spectacular performances.

Coming in at number seven on our Sheryl Crow albums list is the artist’s only country album entitled Feels Like Home. As it was Sheryl Crow’s first country album she did get some flack for it, but the people who didn’t like it are probably the same people who didn’t listen to it because  Feels Like Home is a fantastic album. There are so many incredibly beautiful songs on the Feels Like Home album starting with the debut single from the record entitled “Easy,” which we ranked in the number one spot on our top 10 Sheryl Crow Deep Tracks list. The Feels Like Home album hit number seven on the Billboard top 200. On Billboard’s Top Country Albums charts it shot up all the way to number three. This is an album we highly recommend because it’s just so well-written and so well performed.

Sheryl Crow’s The Globe Sessions was her third studio album. When the album was released there was so many different variations of the CD released with live tracks and  outtakes. A&M Records really enjoyed marketing Sheryl Crow because she had such a loyal fan base and a cult following collecting Sheryl Crow CDs. The Globe Sessions is an extraordinary record. The album’s first single “My Favorite Mistake,” is one of her strongest singles of a career. The song hit number 20 on the US Billboard Hot 100 and number two in Canada. The follow-up single “There Goes The Neighborhood,” was another rocking song full substance and brilliant musicianship.

Sheryl Crow explored a lot more musically on her third album then she had done on her previous two records. Despite some of the big pop singles on the record, there was more of a down-home feel on some of the songs. Songs like “Riverwide,” “It Don’t Hurt,” and “The Difficult Kind,” showed off a different side of Sheryl Crow that we had not heard before.

At the halfway point on our Sheryl Crow albums list is her fifth studio album entitled Wildflower. This is one of those Sheryl Crow albums that did not contain any really big hit singles, yet every song was just a joy to listen to. The album itself did well overall hitting number two on the United States Billboard top 200 albums. Wildflower hit number one on the Canadian albums charts. One of the standout tracks was a great duet between Sheryl Crow and Sting on the song “Always On Your Side.”

Sheryl Crow’s 100 miles from Memphis album was released in 2010  as an ode to 1960s and 70s Memphis music which obviously had a huge impact on Sheryl Crow’s upbringing. 100 miles from Memphis didn’t have any really big hit singles but the album itself hit number one on the US Billboard Rock Albums Charts. The album also featured a guest appearance by Keith Richards on the song “Eye to Eye,” and Justin Timberlake on the song “Sign Your Name,” which was a cover of the Terence Trent D Arby song. The album closer was a rock and roll rowdy version of The Jackson 5 song “I Want You Back.” This is a fun time that sounds great, feels great, and simply is one of her best of all time.

C’mon, C’mon is Sheryl Crow’s good time party album. Although, we could probably say that about few of her other records, there was just something special about C’mon, C’mon. Sheryl Crow grew up in the 1970s and that seventies influences is heavy on this record. It’s the early seventies that really shine through on songs like “Soak Up The Sun,” and “It’s So Easy.” it sounds like those songs could have been released in 1974. Maybe that’s why we love this album so much. The record was released in 2002. It was her fourth studio album and a big seller as it has gone Platinum in the US twice.

Tuesday Night Music Club was the album that started it all for Sheryl Crow. The album was released in 1993. It took a while for the album two achieve the mass success that it eventually did. It wasn’t until the third single was released entitled  “All I Want To Do,” when Sheryl Crow became a massive star. The song went all the way to number 2 on the Billboard Hot 100 becoming the biggest hit of her career. What most people will never forget is how many Grammy awards the album won in 1995. Tuesday Night Music Club won Grammy awards for Record of the Year, Best New Artist and Best Female Pop Vocal Performance. The next day sales of the album went through the roof and Sheryl Crow was the biggest star on the planet. So many great tracks on the album but our favorites will always be “Leaving Las Vegas,” “Can’t Cry Anymore,” “Strong Enough,” and the  album closer “I Shall Believe.”

We close out our Sheryl Crow albums list with her second record entitled Sheryl Crow. Sheryl Crow set out to prove she wasn’t going to be a one hit album wonder artist. And boy did she make a point with her second album. The Sheryl Crow album released in 1996 stands as one the great pop rock music albums of the 1990s. Every single song on this amazing album is just perfect. From the album’s opening slamming in your face song “Maybe Angels.” to the closing “Ordinary Morning the listener is just left breathless by all the songs in between. The album’s opening single “If It Makes You Happy,” hit number 10 on the Billboard Hot 100. No one will ever forget that amazing video that accompanied the single in which Sheryl Crow was caged like an animal in make up and hair that we had never seen her in before. The song won a Grammy Award for Best Female Rock Vocal Performance. Four more singles were released from the album including the songs “Everyday is a Winding Road, Hard to Make a Stand, A Change Would Do You Good,” and the slow ballad “Home.”