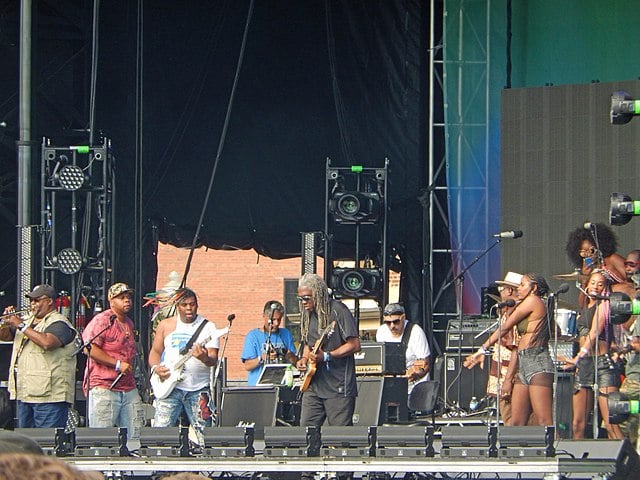 Our Top 10 Parliament Funkadelic Songs list looks back at the recordings of one of the  most soulful and funk driven groups of musicians Planet Earth has ever seen. Can you dig it baby? Parliament Funkadelic were a rotating group of musicians headed by George Clinton primarily consisting of members of the bands Parliament and Funkadelic who have both been active since the 1960’s. Their very unique style has proven to be an influence on much of the funk and hip hop genres as well as post punk.

The origins of the group date back to the 1950’s when Clinton played in the doo-wop group the Parliaments. After moving to Detroit he formed both groups as sister groups- the former playing a more commercial style of funk whilst the other was more psychedelic influenced. For the best part of the next two decades both groups as a collective would have several successful albums and singles.

The name of the group is generally one used as a collective umbrella for a wide variety of musicians who have recorded and worked with Clinton in any capacity. Notable members include Bootsy Collins and Bernie Worrell. By the 1980’s several members including Clinton had begun solo careers and still used a variety of monikers based on the group’s name. Many of the members are still actively performing and recording to this day, with sixteen of them being inducted in the Rock and Roll Hall of Fame in 1997. As recently as 2019, the group was given a Grammy for the Lifetime Achievement Award.

Kicking off our top ten Parliament-Funkadelic songs list is the title track from Funkadelic’s ninth album released in 1976. It was released on Warner Bros Records. Although it only got to number ninety-six on the Billboard Top 100 charts it got much higher on the R&B charts at number twelve.

Up next is the closing track of Funkadelic’s third album Maggot Brain released in 1971. It was produced by George Clinton and was the last Funkadelic album to feature the original line-up. Upon its release it reached the R&B Top twenty. This track, like the opening title track is ten minutes long is truly the album’s greatest masterpiece.

# 7 – Funkadelic- One Nation Under A Groove

“One Nation Under A Groove” is the title song of Funkadelic’s 1978 album. It is widely regarded as a classic of the dance funk genre and is possibly the group’s most well known song. When it was released as a single it peaked at number twenty-eight on the Billboard Hot 100. In the UK, it reached the top ten where it peaked at number nine.

“Flashlight” is a song taken from Parliament’s 1978 album Funkentelechy vs Placebo Syndrome. It was the first number one hit of all of the P-Funk groups. It is yet another track in the Parliament-Funkadelic catalogue which is regarded as an all time dance-funk classic. Lyrically it continues the science fiction P-Funk concept which had previously been established on Funkadelic’s self-titled album.

This track is taken from George Clinton’s second solo album released in 1983 titled You Shouldn’t Nuff But Fish which got to number eighteen Billboard Top Soul Albums chart. This album was self-produced by Clinton and incorporated more of a rock sound. Although this was not released as a single, two of the other five tracks on the record were and both reached the top forty of the Billboard Hot Soul Singles chart.

Next up is Parliament’s second single to be released from Mothership Connection. It is one of the most famous P-Funk songs and was the their multi-platinum selling single. It was the highest charting single from the album, reaching five on the Hot Soul Singles chart. The song very much has its own legacy, making many appearances in popular culture and being covered and sample by a wide variety of artist over several consecutive eras.

# 3 – Bootsy Collins Rubber Band- Id Rather Be With You

This track is taken from the P-Funk offshoot’s first album led by Bootsy Collins titled Stretchin Out In Bootsy’s Rubber Band released in 1976. Although obviously not technically a P-Funk number, it fits in with the chronology as a whole as this record was made at the same as both Mothership Connection and Funkadelic’s Lets Take It To The Stage and was co-produced by Collins with George Clinton. This is also one of the most heavily sample P-Funk related songs, with artists such as Beyonce, Eazy-E and 2Pac having used it in their songs.

Just off the top spot we have another track from Maggot Brain. This is a particularly rocky number that some critics have even compared to the likes of Black Sabbath, which is very easy to see. The album as a whole is one of the most dark and “out there” entries in the entire P-Funk discography, being very drug-influenced and having a rather surreal lyrical concept.

And at the top spot we have title track from Funkadelic’s 1971 album. The track is a ten minute instrumental and as well as being the title song is also the opener. A common story told behind this track is that while under the influence of LSD, George Clinton told guitarist Eddie Hazel to play the song “as if he had just been told his mother had just died.” Although several other musicians played on the track, Clinton faded most of them out in the final mix so that all of the focus was on Hazel’s guitar playing.