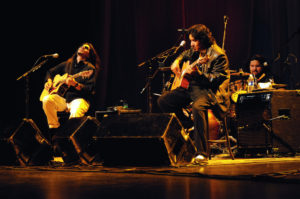 Our top ten Los Lonely Boys songs looks at the work of a Mexican American group from Texas who combine a variety of different styles such as rock n roll, blues and country. They were active from 1996 until 2019. They consisted of three brothers Henry, Jojo and Ringo Garza. They are all sons of Ringo Garza Sr who was also in a band with his brothers called The Falcones.

After eight years of existence and securing a recording contract, they released their self-titled debut album in 2004 which contained the song “Heaven” which was a successful hit, topping the adult contemporary chart as well as gaining high positions on both the Billboard 200 and the top forty chart. In 2006, they released their second album Sacred. This was followed by their third album Forgiven in 2008. In 2009 they released an ep in 2009 titled 1969 which was a collection of covers of songs which had all turned forty years old that year by artists such as The Beatles and Buddy Holly. In 2011, their fourth album was released which was titled Rockpango which is Spanish for “Rock Party.” Their most recent album Revelations was released in 2013. In 2019, Jojo announced his departure from the band, making their current status unknown.

Los Lonely Boys are a band who are very influenced by their heritage, combing the musical sounds that are significant with both Texas and Mexico. Willie Nelson has always been an associate of the band, with their debut album being recorded in his studio and he has made a couple of guest appearances on their albums. So, for anyone who may be unfamiliar with this underrated and brilliant band, here is a list of their ten best songs.

Up next we have a song taken from the band’s self-titled album released in 2004. Although the band had released two independently released albums previously, this album is considered to be their official debut. This was the third single to be released from the album, where it got to number thirty-one on the US Adult Contemporary charts.

The band’s fourth album Rockpango begins with this track that lyrically deals with economic problems in the United States. Musically, it is much more rock-oriented, having a somewhat bluesy guitar sound. After starting off with a groovy swagger, the song then takes a more traditional Mexican vibe when the vocalist starts singing in Spanish.

The next song on this list is this cover of the Doors song from the band’s ep 1969 released in 2009. Of all the songs on the ep, this is the one that is best suited to Henry Garza’s singing style as he does a surprisingly good job of emulating Jim Morrison’s raspy tone. All the tracks on the ep were covers of songs originally released in 1969.

Ending the first half of this list is the title track of the band’s third album released in 2008. The album continues the sound of their previous record Sacred which is considered to be “fuller” than that of the debut due to use of more instruments. The album has a heavy blues sound running throughout and is generally more heavier. It was produced by Steve Jordan who is currently the touring drummer for the Rolling Stones after the death of Charlie Watts.

Kicking off the second half of this list is this track is the third track taken from the band’s debut album. The album was relatively successful, reaching number nine on the Billboard 200 and topping the Independent charts. This song has a somewhat psychedelic sound to it with its use of keyboard that gives it something of a sixties feel.

Here we have a song from the band’s second album Sacred released in 2006 which is actually a reworking of a song that was featured on their original self-titled album released in 1997. It was also the first single to be released from the record. The album has a bigger sound to it than the earlier material which is largely due to the inclusion of a large number of other musicians playing a wide variety of other instruments.

At number three is another song taken from Sacred. The album was very successful getting to number two on the Billboard 200 and topping the US Rock charts. This is one of several songs on the album to contain use of horn instruments. The song does a really good job of combining several different styles, having elements of blues and funk as well as pop.

At number two on this list is another track that was included on their debut album. This is a song that shows that Los Lonely Boys are very aware of their roots as musicians but at the same time are not so dictated by it that they are not able to make a sound of their own. This is a great song that is well crafted and has a perfect summer vibe to it.

At number one on our Los Lonely Boys songs list is this track from their self-titled debut. It reached the top forty of the Billboard 200, peaking at number sixteen. Upon the same year of its initial release in 2004, it also entered the Adult Contemporary charts later that year where it remained for sixteen weeks. It also found some success in the country charts where it reached number forty-six. Critics praised the song for its catchy and melodic sound and compared it to the work of artists such as Stevie Ray Vaughan.

Beyond the chart and critical success, it was received two Grammy nominations in 2005. It won one of the for Best Pop Performance by Duo or Group with Vocal and lost the other one for Best New Artist which was won by American band Maroon 5. The song is their most successful and well-known song, often considered to be their signature track.