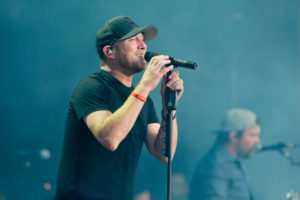 Our top 10 Cole Swindell songs list presents ten of the best songs released by an award-winning singer-songwriter famed for his country sound. Before starting singing, Cole Swindell primarily wrote songs for other artists. While some artists enroll in music classes in reputable institutes to hone their music skills, Cole did none of that. At Georgia Southern University, he majored in marketing. While still in university, he met one of the most successful country singers, Luke Bryan, who they became friends with. His marketing skills saw him tagged in selling merchandise for Luke Bryan. During this time, he showcased his magnificent songwriting career talent.

Cole Swindell bagged a publishing deal with the legendary music publisher Sony/ATV Music Publishing. Here, he penned several songs for Luke Bryan, including “Roller Coaster,” “Just a Sip,” “Out Like That,” and “Shore Thing,” to name a few. He penned songs for other notable singers, including Thomas Rhett, Craig Campbell, and Scott McCreery. During this time, Cole Swindell interacted with Chris Young and Florida Georgia Line, co-writing a few songs for the two before taking on his singing career.

Cole Swindell released his first single, “Chillin’ It,” which, to his surprise, got some airplay. The song would later become one of the best Cole Swindell songs, rising to number twenty-eight on the Billboard Hot 100 (his best on the chart). Soon after the independent release, Cole Swindell bagged a recording contract with the famous Warner Music Nashville. Under the record label, he released his eponymous debut album. The album was produced by former Fast Ryde member Jody Stevens and Luke Bryan’s guitarist Michael Carter.

Cole Swindell’s debut album was quite a massive release, rising to number three on the Billboard 200 Album Chart. In 2014, Cole Swindell would also tour with his friend Luke Bryan opening for him alongside Lee Brice. As the year ended, Cole hit the studio to release his five-track EP The Down Home Sessions. A few months after, Cole received the ACM New Artist of the Year Award, credit to his burgeoning career.

Cole Swindell released his sophomore album You Should Be Here (2016) to build on the success of his previous releases. Some of the reputable songs from the album include “Middle of a Memory,” “You Should Be Here,” and “Flatliner.” However, Cole didn’t seem to stop it at that. He hit the studio once more to try and replicate the success of his sophomore album releasing, All of It (2018). Among the gems from his third album is “Love You Too Late,” which topped the Billboard Country Airplay Chart.

Swindell’s efforts have not gone unnoticed, having him nominated for awards almost every year since he started singing. His songs have also accumulated millions of views and streams, making him one of the cherished, modern figures in the country music scene. Cole Swindell has performed as a supporting artist in tours by Jason Aldean, Kenny Chesney, Florida Georgia Line, Thomas Rhett, Dierks Bentley, and his longtime friend Luke Bryan.

“Let Me See Ya Girl” is a Platinum-certified country hit from Cole Swindell’s eponymous debut album. The song’s lyrics allude to a dude who tries all he can to impress an eye-catching lady he met in a club. “Let Me See Ya Girl” saw Cole Swindell team up with Jody Stevens and Michael Carter in penning its lyrics. Its intriguing bridge makes the song quite catchy. The song manages a number two on the Billboard Country Airplay, rising to number fifty-nine on the Billboard Hot 100 Chart.

Dierks Bentley joins Cole Swindell in singing “Flatliner.” The song finds the two praising the beauty of a woman they have seen in the club dancing. “Flatliner” is featured on the album You Should Be Here (2016). While the song might be one of the best by Cole Swindell, some critics criticized it for not matching up to lyrical maturity seen in “Middle of a Memory” and “You Should Be Here.” Nevertheless, this didn’t stop making this duet from shining. The song peaked at number fifty-six on the Billboard Hot 100.

#7 – Hope You Get Lonely Tonight

“Hope You Get Lonely Tonight” saw Cole Swindell get more than fifty million audience impressions on the last week of September 2014. As a result, the song rose to the peak position of the Billboard Country Airplay Chart. This was the most remarkable weekly audience since 2005 on the country chart. The song finds Cole Swindell’s desires lead him to wishing that a lady gets lonely so that she calls him. “Hope You Get Lonely Tonight” was penned by Cole Swindell, Michael Carter, and Florida Georgia Line. The song peaked at number fifty on the Billboard Hot 100.

Number six on the top 10 Cole Swindell songs is the hit “Love You Too Late.” This upbeat ballad is featured on Cole Swindell’s most recent album, All of It (2018). Despite being a breakup ballad, it is delivered on some awe-inspiring instrumentation. Cole Swindell sings of regret and a missed chance in the song in awe-inspiring vocals not heard in some previously reviewed songs. The song peaked at number forty-nine on the Billboard Hot 100.

We head back to Cole’s eponymous debut album, which introduces us to our number five in the best Cole Swindell song. The hit “Ain’t Worth the Whiskey” is also a breakup ballad like the previously reviewed hit. Cole teamed up with Adam Sanders and Josh Martin in penning this song after a sour breakup. Amazingly, the song was penned in 2011. The song peaked at number forty-three on the Billboard Hot 100.

“Break Up in The End” is another gem from Cole Swindell’s album All of It (2018). The song’s lyrics allude to hanging on to a relationship even though it is vivid that it will not last. Without a doubt, Cole Swindell has seen tremendous growth in his vocals with this release. Initially, the song was pitched to Luke Bryan and the country-pop duo Dan + Shay but was performed by Cole. The song peaked at number forty-nine on the Billboard Hot 100.

It was nominated for a Grammy Award for the Best Country Song in 2019. However, it lost to “Space Cowboy” by Kacey Musgraves. Other songs that were nominated for the award that year include “I Lived It” by Blake Shelton, “Dear Hate” by Maren Morris featuring Vince Gill, “Tequila” by Dan + Shay, and “When Someone Stops Loving You” by Little Big Town.

Cole Swindell’s beginnings in his singing career were amazing, having his debut single “Chillin’ It” surpass many of his songs to feature as the third song on this list. While its lyrics and musicianship might be great, its success is owed to the sweet groove, and vibe Cole Swindell lays in the song. The song awarded the Georgia-raised country singer his first number one on the Billboard Hot Country Songs Chart. “Chillin’ It” rose to the twenty-eighth position of the Billboard Hot 100 Chart.

“Middle of A Memory” is one of the greatest songs by Cole Swindell from his album You Should Be Here (2016). This Platinum-certified ballad alludes to an end of a relationship having the singer lament how a woman left him. Cole Swindell revealed that this song has personal touch having it written out of his own experience. He teamed up with Ashley Gorley and Zach Crowell in penning the lyrics to this hit. “Middle of A Memory” topped the Billboard Country Airplay chart while reaching position forty-six on the Billboard Hot 100.

Number one on our top 10 Cole Swindell songs list is the rip-roaring hit “You Should Be Here.” The hit is the album-titled song of this Georgia-raised country singer’s sophomore album. Again, Cole teamed up with Ashley Gorley in penning to this song. The lyrics allude to Cole’s late father, who passed on when the singer was on tour. This happened shortly after Cole Swindell bagged a record deal. “You Should Be Here” reached the peak of the Billboard Hot Country Songs chart and Billboard Country Airplay Chart. On the Billboard Hot 100, the song managed to rise to position thirty-one.