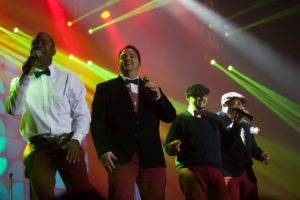 Before becoming the Grammy Award-winning group, All-4-One, band members Jamie Jones, Delious Kennedy, Alfred Nevarez, and Tony Borowiak first formed their quartet out of Antelope Valley, California, USA in 1993 that chose to pool their talents to perform heartfelt ballads that catered to the pop and R&B genres. The formula of success this band utilized has been a winning one ever since the release of their eponymous debut album on April 12, 1994.

The debut album All-4-One released in 1994 still remains as the group’s most successful album produced by the group. It was certified platinum four times by the Recording Industry Association of America (RIAA), as well as three times platinum by Music Canada (MC), and also received gold certification from the Australia Recording Industry Association (ARIA). The second album, And the Music Speaks, was released on June 6, 1995, and also became successful enough to earn certifications, namely platinum with the RIAA and gold with Music Canada. The third and final album All-4-One recorded with Atlantic Records before distancing themselves from the label due to creative differences was On and On, which was released on June 8, 1999. Since then, four additional studio albums were released. In addition to the seven studio albums, All-4-One also has three compilation albums, two live albums, and two Christmas albums to their credit. In total, there are twenty hits to their name, as well as ten songs featured on movie soundtracks.

The origins of the song, “The First Noel,” are believed to date as far back as the Middle Ages with its deep Cornish roots. This powerful Christmas carol has been a longtime favorite song to listen to, sing to, and simply get caught up in the spiritual wave of one of the most beloved songs of all time. While many artists have covered this song, there are some who have performed it so much better than others. For Mariah Carey, Glee Cast, and Gabby Barrett, each of them placed First Noel on various Billboard music charts. The version from All-4-One may not have seen any chart appearances, but adds an incredible amount of rhythm and soul to the song that makes their performance among the best ever poured into it.

Quartets are at their best when each performer works together in perfect harmony. “Better Man” is an R&B classic at its finest as the masters of power ballads brought forth an intensely soulful performance to this remarkable song. Although not officially released as a single, this influence of this song has been powerful enough to earn a solid fan following of its own.

2002’s “Beautiful As U” charted on the US Billboard Adult Contemporary Songs as high as number thirteen as it was a favorite song of choice among romantics. On March 26, 2002, All-4-One released the group’s fourth studio album, A41, which is loaded with one power ballad after another, which is the trademark sound of one of the most talented quartets ever to grace the pop and R&B genres.

All-4-One performed the single, “(She’s Got) Skillz,” as one of the tracks that came from their self-titled debut album. Slightly faster-paced than some of their best-known songs, the playful tone of this R&B classic featured an amazing variety of vocal tones that added to the overall appeal. In New Zealand, its official music chart loved the song so much that it peaked as high as number three there. On the US Billboard Hot R&B/Hip-Hop Songs chart, it charted as high as number forty-nine, and on the US Billboard Hot 100, at number fifty-seven.

Recorded for the 1996 movie, Space Jam, All-4-One’s “I’ll Turn to You” served as a soulful performance of support, full of hope and inspiration only the rhythmic talent of the quartet can pull off. Although the song did not find a spot on any official music billboards, it was inspirational enough to be covered by a number of artists, including Christina Aguilera, who turned this song into an international hit after its year 2000 release.

The piano performance of “Now That We’re Together” is simply spectacular. Add the lyrical genius of All-4-One and the recipe for the ultimate romance song is complete. The maturity of All-4-One as their combined experience in the music industry as artists has witnessed them blossom into the very definition of what the perfect quartet should be. While the song did not appear on any music charts, it has been viewed over 400,000 times on the group’s official channel. Add that number up with the collection of channels set up by their fans and this number becomes double.

In 1996, Disney brings forth its animated film, The Hunchback of Notre Dame, as well as its official soundtrack. “Someday” was the single All-4-One recorded, which was designed for the North American audience. This same song about hopes, dreams, and possibilities has been recorded by a number of different artists, each time designed to accommodate the nation it was edited for. The one played in the movie during the closing credits is in Latin. All-4-One’s version peaked as high as number fourteen on the US Billboard Adult Contemporary chart and at number thirty on the US Billboard Hot 100. It also became a certified-gold hit. The piano performance throughout the song, regardless of the version, is nothing short of phenomenal.

“So Much in Love” was the first single All-4-One released as a quartet. Coming from their self-titled debut album in 1994, this powerful ballad became a certified gold hit by the RIAA, which made it a commercial success to further compliment the charting success this song achieved. On the US Billboard Rhythmic chart, So Much in Love peaked at number one. On the US Billboard Hot 100, it reached as high as number five. Globally, it charted as high as number three on New Zealand’s Recorded Music chart, and at number sixty on the UK Singles Chart. The Thymes were the original artists who performed So Much in Love, which became that group’s first number one hit on the US Billboard Hot 100 in 1963.

The quartet’s name is All-4-One and their specialty is producing power ballads designed to get under the skin of the listener who can’t get enough of R&B classics that have the ability to become as attached to one’s soul as the heart itself. “I Can Love You Like That” played an instrumental role to help the group’s second album, And the Music Speaks, to become one of the most successful recordings to date. Originally, the single was recorded and released by country star, John Michael Montgomery, in 1995. All-4-One’s coverage of this song would be one of two times that came from an artist that inspired them so much to immortalize his music with their own unique style.

Their version was released two months after Montgomery’s, which caused two different versions of this song to grace the US Billboard charts within the same year, and in some cases, at the exact same time. If the preference was the country version, Montgomery’s would be the choice. If one would rather hear the song in R&B format, there was All-4-One’s version. I Can Love You Like That, by the quartet, earned gold certifications from ARIA and the RIAA after its release. For them, the single peaked song peaked as high as number two on the US Billboard Adult Contemporary chart, as well as in New Zealand. On the US Billboard Hot 100, it peaked as high as number five. Outside the US, the song charted within the top twenty among the nations of Australia, Canada, and New Zealand. It was within the top forty with the Netherlands and the UK, charting at number thirty-three with both.

“I Swear” is the official signature song of All-4-One as the quartet produced one of the most beloved ballads of all time that penetrated the hearts of music fans, regardless of their music genre preference. After its release in 1994, it topped virtually every music chart there is on a worldwide level. Among the nations that did not chart the song at number one, the lowest rank score “I Swear,” received was from Finland as number six was as high as it would climb on its official Billboard chart.

Not only did this declaration of love power ballad dominate the music charts at the timing of its first release, but it also remains as one of the highest favored songs of all time, at least according to the US Billboard Hot 100 All-Time charts. Currently, I Swear sits at number ninety-eight. In addition to becoming a cult classic, this song won a 1995 Grammy Award for Best Pop Performance by a Duo or Group with Vocal. It has also since become a double-platinum hit with ARIA, as well as single platinum with the music industries belonging to the American, Austrian, German, New Zealand, and UK nations. With the Netherlands and Sweden, the song became certified gold.

Originally, this song was performed by country artist, John Michael Montgomery in 1993. For him, it reached number one on the country music charts, as well as served as an inspirational piece that saw All-4-One help catapult this song to legendary status. I Swear belongs to the group’s self-titled debut album, which was released in 1994.