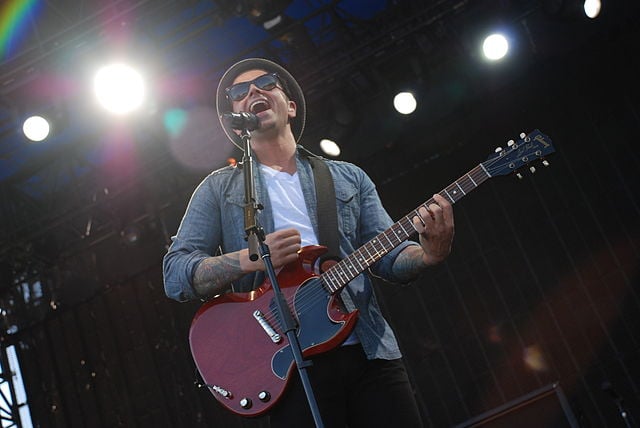 Our top 10 Dashboard Confessional songs introduce us to the very best of a Florida-born rock band known for their multi-genre music profile. While they started their journey with a great love for emo and acoustic rock, Dashboard Confessional would soon tag in transcendent indie rock and alternative rock songs. Their journey started when their frontman Chris Carrabba left his former post-hardcore Christian band, Further Seems Forever, to pursue his solo project. Chris would release his second solo album, The Places You Have Come to Fear the Most, and an E.P. all under the name Dashboard Confessional.

Thanks to his promising singing and songwriting skills, he was able to tag along with three new members to his solo project branding the band as Dashboard Confessional. Carrabba never slammed the door while exiting his former band, and thanks to his courteous move, he remained instrumental to the band. A legend in his own league, Carrabba played a great role in reviving the emo genre and created quite a generation of new emo fans. Success was not far from reach, having Carrabba’s lead Dashboard Confessional to the MTV Video Music Awards for the song “Screaming Infidelities.” What followed is their commercial success with the next album, A Mark, A Mission, A Brand, A Scar, reaching a peak position of number 2 on the Billboard charts. Influenced by big names such as The Beach Boys, Weezer, R.E.M., and The Cure, among others, the band took on the stage to do nothing less than impress the rock world. Here are the top 10 Dashboard Confessional songs from the band’s seven studio albums.

Ushering us to the top 10 Dashboard Confessional songs is the song “Remember to Breathe.” Written by Chris Carrabba, this introduces us to the almost perfect songwriting skills from quite a dependable frontman. And if that feels not enough, Chris Carrabba graces the song with some sublime vocals that blend so well with the acoustic vibe of the song. Thanks to MTV Unplugged that the song became popular, pushing the band to new heights in their career.

Featured in Dashboard Confessionals album, A Mark, A Mission, A Brand, A Scar, the song “Rapid Hope Loss” brings on the popular emo vibe to the band’s fanbase. While the song might feel quite heartbreaking, it received quite a nice reception by emo genre lovers. Numbers don’t lie with the song reaching a peak position of numbers 37 and 75 in the U.S. Alternative Airplay chart and U.K. Singles chart, respectively.

Turning bad days to probably one of the biggest and successful days in your life is not something that happens frequently. However, Chris Carrabba beat all odds with the song “Screaming Infidelities,” which found him right after suffering a heartbreak. And as you can guess, Chris Carrabba, like any mediocre guy of his time, would get curled up, get drunk and listen to some sad songs trying to reminisce about the lost lover. And when moving on proves to be more of a necessity than a want, Chris chooses to embrace the misery that befell him. However, any left item will definitely hurt, and for Chris, this was the hairs she left which he described as “screaming infidelities.” Peaking at number 22 on the Billboard Alternative Songs chart, the song would have its video win the 2002 MTV Video Music Awards.

Featured as the lead single for their sixth studio album, Alter the Ending, the song “Belle of Boulevard” proved that Dashboard Confessional still had the power to continue their impressive musical journey. The song is based on a girl whom Chris considers as a beauty among the beautiful he saw. Its great lyrical content and affectionate feel had the song receive quite a positive reception by Dashboard Confessional fans and critics.

Dashboard Confessional gave their fans endless nostalgia with their 2017 release “We Fight,” reminding them of how skilled the band was in its prime. Featured as the lead single in the band’s most recent album, Crooked Shadows, the song “We Fight” brings out the positive outlook of fighting through struggles. Despite the song coming after the band’s hiatus between 2011 and 2015, it was received warmly by emo and alternative rock fans, having it reach a peak position of number 14 in the U.S. Alternative Airplay.

Teaming up with Cash Cash was probably one of the best ideas by Dashboard Confessional, having the result be an infectious new single “Belong.” Featured in Dashboard Confessional’s album, Crooked Shadows, the song “Belong” has its music video feature Cash Cash and Carrabba is a lighthearted spin on the ultimate superfan. Credit to Carrabba for the amazing lyrics for the song where he brings about the freedom of a journey without aim.

Featured in their 2006 album, Dusk and Summer, the song “Don’t Wait” brings yet another great composition by Chris Carrabba. “Don’t Wait” is all about living your moment since that all we have tomorrow is not guaranteed. The song went on to impress a global fanbase having it appear in music charts not only in the U.S. but also in Scotland and U.K.

The song “Hands Down” brings to rock fans the story of a day in the life of Dashboard Confessional’s songwriter and frontman Chris Carrabba. Originally, the song was recorded for Dashboard Confessional’s acoustic So Impossible E.P. “Hands Down” would later be recorded as a single in the L.P., A Mark, A Mission, A Brand, A Scar. Record label Vagrant Records did some great work on the song, having it peak at number 6 and 8 on the U.K. Rock and Metal chart and U.S. Alternative Airplay, respectively.

At number two is the song “Vindicated,” which brought out Carrabba’s love of comic books. “Vindicated” was written for the movie Spider-Man 2 on the condition that he would see the movie before its release. Within an hour, Chris was done writing the song, but its impact would last for the band’s music career.

Featured in Dashboard Confessional’s 2006 album, Dusk and Summer, the song “Stolen” is one of the most successful songs by the band. Debuting at number 65 on the Billboard Hot 100, the song would have its great lyrical content, and a catchy tune pushed it to a peak position of number 44. With the song receiving quite a nice reception, Dashboard Confessional would re-record the song as a duet with German pop band Juli for the German market.

Classicrockhistory.com claims ownership of all its original content and Intellectual property under United States Copyright laws and those of all other foreign countries. No one person, business or any organizations is allowed to re-publish any of our original content anywhere on the web or in print without our permission.