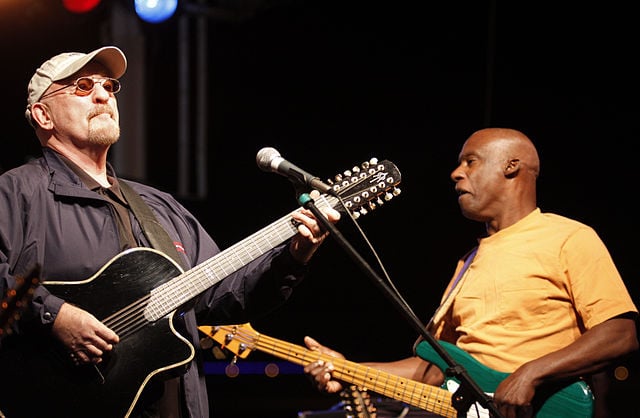 Our Top 10 Dave Mason Songs looks at the solo career of one of the most legendary and affluent singer songwriters of the classic rock era. This article focuses on the music Dave Mason released as a solo artist. We have stayed away from the material he wrote with, or for the legendary band Traffic with the exception of “Feeling Alright,” which Dave Mason released multiple times as a solo artist. Dave Mason played an important role in the band Traffic, but his involvement with the group was more or less based on a revolving door status as he left and rejoined the band multiple times.

Dave Mason has had an exceptional solo career releasing a large body of work since his first solo album release in 1970. Since that fabulous debut album, Dave Mason has released fourteen studio albums. On the live album front, Dave Mason has issued seven live albums. There have been twelve compilation albums released regarding Dave Mason’s music. Four live videos have also been issued by Dave Mason and his various record companies.

Many Dave Mason fans do not realize the amount of material Dave Mason has collaborated on over the years with various artists. Dave Mason has been credited with session work with some of the most famous artists of all time including Jimi Hendrix, Graham Nash, Eric Clapton, Donovan, George Harrison and The Rolling Stones.

We open our top 10 Dave Mason songs list with his huge 1977 hit “We Just Disagree.” This was the songs that many old school Dave Mason fans didn’t really care for, arguing that it was too commercial. That was a sad argument, because it really is a great song. The song “We Just Disagree,” was written by Jim Krueger. Contributing to the great vocal harmonies on the song was the brilliant Stephen Stills.

Dave Mason, Stevie Wonder and Leon Russell all on one track. How could it not be great? It most certainly is. The song “The Lonely One,” was released on the It’s Like You Never Left

album. That great record was released in 1973.

When the Alone Together

album was released, it featured an incredible colored marble vinyl record. It was the type of vinyl release that record collectors would die for. The great track “Look At You Look At Me,” was one of the finest Dave Mason songs released on the album.

The second track from the Let It Flow

The Dave Mason song “If You’ve Got Love,” was issued on the 1973 album It’s Like You Never left

# 5 – All Along The Watchtower

The incredible live version of Jimi Hendrix’s “Along The Watchtower,” was released on the great Dave Mason live album Certified Live.

Long out of print on cd, if you can find this pick it up because it’s one of the best classic rock live albums ever released.

Listen to the harmonies and lead vocal on this amazing recording. That’s all that needs to be said. Released on the Mariposa de Oro

This was one of the classic Dave Mason songs recorded during his early solo period. The song was released on Dave Mason’s debut solo album Alone Together

The classic Dave Mason track “Every Woman,” was released on the Dave Mason

album in 1974. Richard Bennett’s beautiful pedal steel guitar playing gave the track that multi-genre sound that made it a very popular track crossing the boundaries of soft rock and county.

There are so many versions of this classic song that it basically comes down to just picking your favorite. We have always loved the funky live version that was released on the Best of Dave Mason.