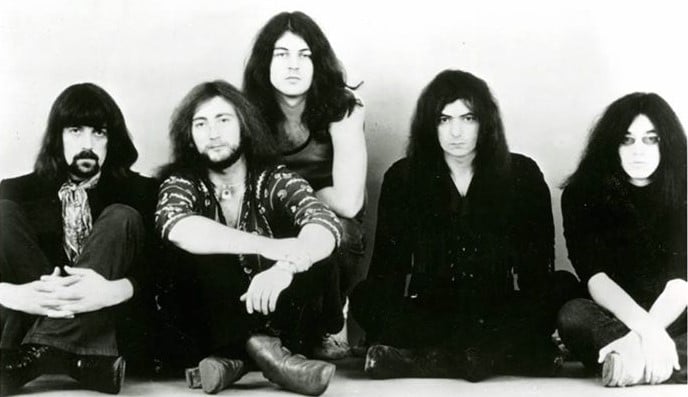 Our top 10 Deep Purple Albums list takes a look at one of the most legendary rock and roll bands in classic rock history. Deep Purple became one of the pioneering bands in the heavy metal genre. Along with groups like Black Sabbath and Led Zeppelin, Deep Purple changed the sound of rock and roll taking it away from the genres of 1960s psychedelic and progressive rock to a harder and sometimes darker sound that fit with the changing times. Deep Purple went through multiple lineup changes throughout their history.

Our top 10 Deep Purple albums list takes a look at what we believe are the 10 best Deep Purple albums the band has released throughout their career. We rank them in the order of our favorites. Of course, it’s all subjective, but in the end it’s a lot of fun to do.

We open up our Top 10 Deep Purple Albums list with the band’s twentieth album entitled Infinite. While a lot of critics or fans may argue that nothing the band has done since their 1960s and 70s period compares to those years, we says that BS. Infinite is a great freaking album. Its actually killer. Don Airey‘s organ work on this record is incredible and pays many respects to the legend of Jon Lord.  If you haven’t heard this record, stop what your doing and check it out. This is truly a great Deep Purple record and the best thing the band has released since Perfect Strangers.

One of the goals of any top 10 albums list by any band is trying to present music from all the time periods the band released albums. Of course there are exceptions, and that is not always possible. However, Deep Purple is one of the longest running bands in Rock and Roll history. Yes of course they have produced many different lineups overtime, but it still is Deep Purple. We could not compose a top 10 Deep Purple albums list without including at least one of the first three albums from the 1960s. Our favorite of the three has always been their second album released in 1968 entitled, The Book of Taliesyn.

The Deep Purple album Stormbringer was released in 1974. The album presented fans with the Deep Purple MKIII lineup that included David Coverdale on vocals, Ritchie Blackmore on guitars, Jon Lord on keys, Glenn Hughes on bass and Ian Paice on drums. The album is a bit reflective of the time period in 1974 when funk music was very popular. Standout tracks on the album included “You Can’t Do It Right (With the One You Love),” “High Ball Shooter,” “Stormbringer,” and  “Love Don’t Mean a Thing.”

We continue our Top 10 Deep Purple Albums list with the great Deep Purple album Who Do We Think We Are. The album was released in 1973. It would be the final album released by the team of Blackmore, Lord, Paice, Gillan and Glover in the nineteen seventies. That classic line-up would later reunite on the Perfect Stranger album that was released over ten years later in 1984. Nonetheless, the  Who Do We Think We Are album turned out to be a huge selling album for the band. Those sales were fueled by the massive success of the single “Woman From Tokyo.”

Speaking of the Perfect Strangers album….. This fabulous album was the last great Deep Purple album released up until the band’s recent record Infinite in 2017. The album proved to be extremely successful for the band at least from a commercial point of view. It wound up being the second biggest selling album of their career behind Machine Head. Two singles were released from the album including the title track and the album opener “Knocking at Your backdoor.” The latter being a killer seven minute album opener that recalled  Deep Purple’s glory days.

Continuing with our top 10 Deep Purple albums list we turn to the legendary album entitled Burn. Deep Purple’s Burn album was released in 1974. This was the first album to feature the lineup of David Coverdale on vocals, Ritchie Blackmore on guitars, Jon Lord on keys, Glenn Hughes on bass and Ian Paice on drums. The band seemed to have something to prove with this album. The record opened with the unbelievable smoking dynamic track “Burn.” I remember buying this album when it first came out and not knowing what to expect because of the changes in the band. I was completely floored at what I heard. I played this album every day until the next one came out.

The Deep Purple album Fireball was released in 1971. It served at the follow up to their incredible record Deep Purple in Rock. A tough album to follow. Many of the band members were not happy with the record because they felt they were rushed to put it out. Constant touring did not allow for a lot of time to write and record an album the way they wanted to. Nonetheless, fans loved the record. It has stood the test of time as being one of their best. It was the band’s second album released with their MKII lineup.

As we close in on the number one spot on our top 10 Deep Purple albums list, we turn to the album that many Deep Purple fans and critics would argue was the band’s best studio record. The classic album Deep Purple in Rock was released in 1970. It was the first album to feature the lineup of Blackmore, Lord, Paice, Gillan and Glover. The band’s sound change dramatically on this record from their first three albums that were bathed more in progressivism and psychedelic Rock when compared to the more heavy metal aspects of this one. The album was huge in Europe especially the United Kingdom. It was not as popular initially in the United States as it was on the western side of the Atlantic. These top three Deep Purple albums are pretty much interchangeable in order. They are all amazing rock and roll records.

If your were a rock and roll fan growing up in the 1970s, we would say the chances that you had Deep Purple’s Machine Head album in your collection were pretty high. The Machine Head album was released in 1972.  It would become the bands most successful album of all time selling more units than any other Deep Purple record in the band’s entire history. Fueling the success of the album were the songs “Smoke On The Water,” which would become the first song every enthusiastic amateur guitar player would learn, plus the great tracks, “Space Trucking, Lazy and Highway Star.”

The album opened up with “Highway Star,” and “Child in Time,” on side one. “Smoke On The Water,” and “The Mule,” on side two. “Strange Kind Of Woman,” and “Lazy,” on side three with the twenty minute “Space Trucking,” filling up the entire fourth side of the album. The band lit it up on every track on this amazing record. In the end, Made In Japan defined the best of Deep Purple in the 1970s representing the best lineup the group ever put forth under the Deep Purple name.