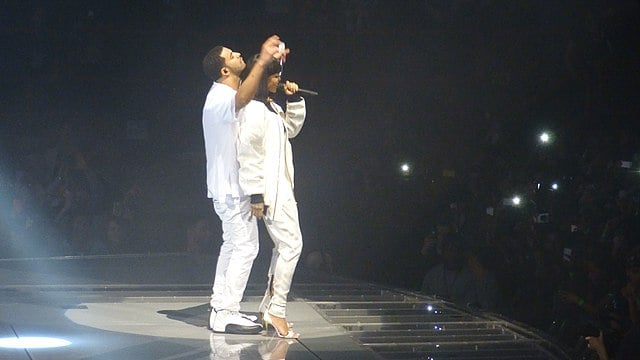 Aubrey Drake Graham, known by his stage name Drake is a Canadian songwriter, rapper, actor, singer, producer, and entrepreneur. He was born on 24th October 1986. He first gained popularity in the teen soap Degrassi: The Next Generation. He played the role of Jimmy Brooks for seven years. Drake left the series and released Room for Improvement- his debut mixtape in 2006. The following year, he released Comeback Season and So Far Gone in 2009 before signing for Young Money Entertainment- Lil Wayne’s label.

Drake is rarely out of the headlines; founding his own label OVOsounds, dating Rihanna or Jennifer Lopez, or for Fronting NBA’s Toronto Raptors as their team’s global ambassador. Drake released his debut studio album- “Thank Me Later” in 2010 which peaked at number one on the US Billboard Hot 200. From there, he achieved major success with his album “Take Care” 2011 and “Nothing Was the Same” 2013. He has been consistent with his albums and songs and his album Views 2016 topped on Billboard Hot 200 for thirteen non-consecutive, weeks making history. Below are the top 10 legendary Drake’s songs

“Nice For What” was released at the perfect time when Drake WAS conquering the music industry. We all agree that a happy Drake is ultimately a high-functioning Drake; his smile makes his music best.

This track was recorded from his fifth studio album Scorpion. The song was released by Young Money Entertainment and also Cash Money Records as his second single on 6th April 2018. The song might seem like just a simple phrase, but it carries so much weight, even its chorus. The song clearly shows how frustrated women are with society and how their position has been undermined and how they are not supported.

“Nice For What” received much applause from the music critics for empowering women and is considered a perfect delivery from one of the greatest hip-hop artists. The music video shows different women carrying out activities such as modeling, swimming, dancing, horse-riding, and playing with children as well as holding business meetings. Its unique message and video helped it peak at number one on the US Billboard Hot 100, number one on the US Hot R&B/Hip-Hop Billboard Songs. This was a great hit with lasting memories.

Drake’s songs are all exceptional and ranking them becomes quite a challenge, but I can comfortably say this deserves to be on our top 10 list and precisely at number nine. Everyone knows about the beef between Drake and Meek Mill, and the former uses this song “Back to Back” to demolish Meek Mill. This song features numerous jokes and memes. He uses killer and hilarious quotes to almost end Mill’s career.

In this diss track, Drake aims at Mill’s relationship with Nicki Minaj. He disses him for being the opening act for Nicki. The killer lyric “I know that you gotta be a thug for her/this ain’t what she meant when she told you to open up more,” a direct response to “Buy a Heart” by Nicki Minaj where she was expressing her doubts over Mill’s emotions. This song did quite some damage on Meek and he was a punching bag for several months. This song was very successful peaking at number twenty-one on the US Billboard Hot 100 as well as being nominated for the Best Rap Performance; 58th Grammy Award.

“Take Care” never gets old and we do not expect it to. This track by Drake featuring Rihanna is uplifted by the real-life tension, but what makes this track one of the greatest is Drake’s right-hand man, 40, and Jamie xx.

In this track, Drake and RiRi address the issues that hit our homes including missed connections, failed romances, relationships with family and friends, and more most romantically and lovingly. Generally, the tracks explore mistrust, heartbreak, and loneliness.

The song was released on 15th November 2011 by Young Money Entertainment as the second studio album Take care just like the song title itself. I would regard this song as the most open and honest song by the carefree Drake.

When was the last time you listened to this track or have you ever listened to it? This song is spectacular. The opening line ” You used to call me on my cellphone / Late night when you need my love” is a genius one. It may be similar to his past lyrics, but the comparison of his other songs with this track’s infectious melody makes it the most compelling single in Drake’s music career.

This track is his lead single from his fourth album-Views released in 2016. This song was a great hit and featured at position two on the US Billboard Hot 100 and topped the chart for the US Hot R&B/Hip-Hop Billboard Songs. This song will always tempt you to press the repeat button all day.

At peak number six on our list is this miraculous song ” Hold On We’re Going Home.” In this track, Drake features Majid Jordan, but the song is so perfect that you would think it is Drake featuring Drake.

This is a nice song and is one that you will always hear at wedding events and YMCA events. The reason is simple; the song is catchy, melodic, and with simple lyrics as well as a romantically speaking song. In the music video, Drake acts as a kingpin whose lover has been kidnapped and he is doing anything within his power to rescue her from her captor. The song debuted at peak number five on the US Billboard Hot 100 and it was Drake’s thirty-third hit to feature on the top 10 charts, which clearly shows how iconic he is. Eight years later, the song still feels exceptional.

After a period of significant dormancy, dance-pop or rather Hip-Hop was back at its best, and the rappers who dominated the top positions including Pitbull, Flo-Rida, and the Black Eyed Peas were on their knees upon the release of ” Best I Ever Had” If this is your first time playing Drake’s discography, this is the place you should start. The track was Drake’s first breakthrough and it peaked at number two on the US Billboard Hot 100 which was his highest peak until he released “One Dance” which peaked at number one in 2016.

The track is full of interesting and killer lyrics that combines being boastful” Buzz so big I could probably sell a blank disc”, charming with the perfect corny “You could have my heart or we could share it like the last slice”, and also portraying his vulnerability “Baby, you my everything, you all I ever wanted”. This track was incredible and was nominated for two Grammy Awards: Best Rap Song and Best Rap Solo Performance.

At peak number four is “Worst Behavior” by this Canadian recording artist. The track is featured in his third studio album “Nothing Was the Same” released in 2013.

The music video shows an occasionally overlooked side of Drake’s family ties venturing from his father’s hometown- Memphis. The Killer Lyric “My momma probably hear that and be mortified.”……For all the stunting I’ll forever be immortalized… I should let you know ahead I’m coming back on my worst behavior.” The track tells us about the future Drake has seen and how he will never be separated from it. He just informs us ahead of time. The song peaked at number 89 on the US Billboard Hot 100 and position 29 on the US Hot R&B/Hip-Hop Billboard Songs.

In this track that peaks at number three on our list; you see Drake being Drake. He is being real and lets the predictable chatter about his upbringing and realness be the main point of discussion. This song features Drake’s love in the crew, endless nights, and an argument with his uncle. Surely these are the kind of things you need to hear to comprehend that everyone bears their own weight and struggles.

The track is his first single from Nothing Was the Same- third studio album. Drake claims that he feels that his audience does not have adequate information about his humble beginning and they make up a story that is not consistent with the real events. The track debuted at peak number six on the US Billboard Hot 100 and number two on US Hot R&B/Hip-Hop Songs. It is a stunning track to understand Drake’s background.

This track was a show of Drake rising to power over the famous culture. “The Motto” is a track about being bored, that is, “clubbing hard and sleeping with women” since there is not much to do, so you turn that boredom into a flex. Drake clearly states that his motto is “you only live once (YOLO).” He raps the song’s first stanza and probably sums up the entire song in this verse.

In this track, Drake features Lil Wayne and they exchange raps in the most exciting way you have ever heard. This track is a great hit and has sold more than three million digital copies in the United States. It is featured in his second studio album Take Care and was released on 31st October 2011. The track topped the US Hot R&B/Hip Hop Songs and peaked at number 14 on the US Billboard Hot 100.

Without a doubt, this track tops our list of Drake’s songs. This is not the song with the best drums or beats or with the most extravagant production, but a song with the least production and this is the point because Drake spills out his heart and is real and raw since a song with such commercial success has the artist giving out his best.

In the song, Drake calls his ex-girlfriend and tells her how her man is boring and he will be as good as Drake. He goes on and tells her probably she misses him and thinks about the happy moments they shared. The track is the lead single from Drake’s second studio album. It peaked at number 21 on the US Billboard Hot 100 and number 7 on US Hot R&B/Hip-Hop Songs.

Drake has been ultimately a legendary hip-hop artist in the last decade and his music has been the most listened to. Drake has maintained consistency in producing inspiring and interesting songs that have been liked by his fans, even his critics or rather haters. The above songs by Drake are very interesting and cover all aspects of our lives. You will enjoy each song listed in this article.