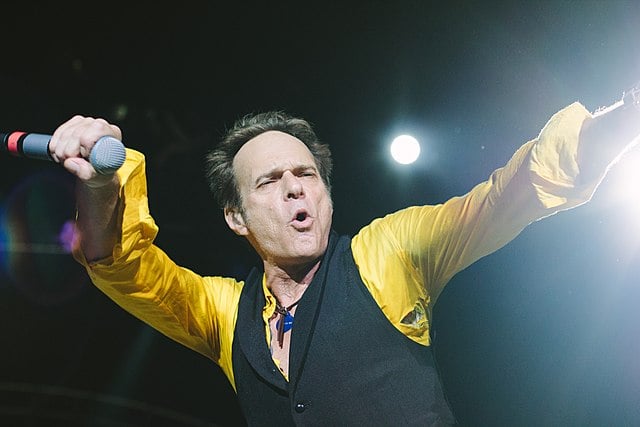 Our David Lee Roth Albums List looks back at the great rock and roll albums released by the legendary singer David Lee Roth. When reviewing these albums for this article, it hit us really for the first time that David Lee Roth didn’t really release many solo records. Sammy Hagar has him beat by far in that department. Yet, of course Sammy Hagar was a well established solo artist before he joined Van Halen as opposed to David Lee Roth whose career began with Van Halen. As most of us Van Halen fans know, David Lee Roth left Van Halen album after the 1984 album and tour. With a successful EP entitled Crazy From The Heat and MTV treating him like he was Ricky Ricardo on steroids giving him fame, fortune and extreme publicity, David Lee Roth felt he didn’t need Van Halen anymore. He was going to be the biggest and most wonderful rock star in the world. And so the David Lee Roth solo career had begun.

One has to hand it to David Lee Roth for how he began his solo career. He hired one of the most exciting and creative guitarists in the business named Steve Vai who also had that ultra bad boy rock star look. Frank Zappa fans knew what a brilliant hire this was from the work Steve Vai had done with Zappa. Rounding out the original David Lee Roth Band was Gregg Bissonette on drums and killer bassist Billy Sheehan. Three phenomenal musicians who could create a sound that really did rival Van Halen. It was a brilliant move that was incredibly successful. Too bad it did not last that long.

David Lee Roth released two great albums with Billy Sheehan, Steve Vai and  Gregg Bissonette. Eat ‘Em and Smile was released in 1986 and Skyscraper in 1988. Everything else David Lee Roth released after those first two albums were on a different level than his first two. David Lee Roth’s third solo album was released in 1991 entitled A Little Ain’t Enough. It wasn’t a bad album and was probably too harshly judged, but it was still a letdown when compared to the first two. His fourth album entitled Your Filthy Little Mouth would become his first solo album not to go Gold. It actually sold less than one hundred thousand copies in the US. A far cry from his platinum selling albums with Van Halen. David Lee Roth’s star had dimmed dramatically in the ten years since the mid eighties and all that David Lee Roth MTV nonsense.

No longer on Warner Brothers Records, David Lee Roth returned four years later with his fifth solo album entitled DLR Band. This one was a really good rock and roll record. However, without a major label to promote it, most people did not even know it existed. It sold only just over fifty thousand copies. David Lee Roth’s final solo album as of this writing in 2021 was released in 2003 entitled Diamond Dave.

Our David Lee Roth Albums Ranked list looks at all six David Lee Roth studio albums plus his EP and puts them in order of our favorites. The whole reason behind these ranked lists is to help people pick the best ones to buy or at least offer them a place to start.

We open up our David Lee Roth albums ranked list with his most recent released album entitled Diamond Dave. When I first discovered this album I thought it was a bootleg because the album cover was printed so horribly it looked like a boot. I don’t know how an official record label such as Magna Carter would release an album featuring one of the most famous rock stars in history with such a poor cheap looking cover. The music itself is all cover songs. There is a guest appearance by Edgar Winter on two tracks. Its nice that David Lee Roth covered a pair of Savoy Brown songs. That’s good taste.

David Lee Roth’s Filthy Little Mouth album was released in March of 1994. This was an album that was not met with much praise from Van Halen fans. It was nothing like his previous albums and a far cry from his Van Halen days. This was a slick record produced by Nile Rogers known for his slick well produced work he had done so many times in his career with artists such as Madonna, David Bowie and his original band Chic. What it really proved was David Lee Rothh’s material was really just dependent on the songs he choose and the cast of musicians  he would hire for his albums. Just like most artists who are traditionally just singers.

A Little Ain’t Enough was the third solo album David Lee Roth released. The album was issued in 1991. It was a time period when music would begin to change dramatically as bands like Nirvana, Pearl Jam and Soundgarden would change the musical landscape of the times with their moody dark rock and roll music that became widely accepted. Steve Vai was no longer in the band and his loss was severely felt on the album. Up-and-coming guitarist Jason Becker took over the reins on lead guitar on the album but sadly could not tour with David Lee Roth as he was diagnosed with Lou Gehrig’s Disease after the album has completed.

We felt it was pretty important to include the Crazy From The Heat EP on this list. Even though the EP only contained four songs, the EP was so successful it seemed to serve as the catalyst for David Lee Roth leaving Van Halen. Although there were probably many other factors at play. However, it was the accompanying videos to the songs “California Girls,” and “Just a Gigolo/I Ain’t Got Nobody” that fueled the EPs platinum selling success. And yes, of course this was also David Lee Roth lead singer of Van Halen who had just released their most successful album of their career in 1984. The world was all David Lee Roth’s at this point in time back in the mid 1980s.

The classic David Lee Roth album Skyscraper was released the follow up album to the extraordinary record Eat Em And Smile. The Skyscraper album was released in 1998. This was an absolutely successful album selling over 2 million copies in the United States. The album maintain the same phenomenal Rockstar band that performed on the first album including Steve Vai on guitar, Billy Sheehan on bass, Gregg Bissonette on drums. The band also added Brett Tuggle on keyboards.The album’s lead single “Just Like Paradise,” was a huge hit in the United States. The song broke into the US Billboard Hot 100 top 10 section peaking at number six. It had even greater success on the US Billboard Rock Charts section reaching all the way up to the number one spot.

We close out our David Lee Roth albums ranked list with one of rock and roll’s truly great albums of the 1980s entitled Eat Em and Smile. The sound of Steve Vai’s guitar talking to David Lee Roth in the opening moments of the song “Yankee Rose,” turned everyone’s heads instantly and turned this band into a huge sensation completing the promise that David Lee Roth made to himself and himself and himself that he was going to be the biggest star in the world. Would this album have been as successful without Steve Vai, Gregg Bissonette and Billy Sheehan? Absolutely not, those musicians made this record and of course the songs did too.