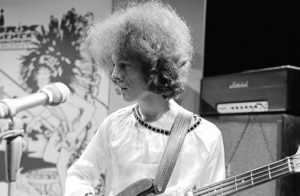 Our top 10 Fat Mattress songs list presents ten of the best songs released by an English band famed for its blend of folk, progressive, and psychedelic rock. Fat Mattress was formed in 1968 only to disband two years later. The man behind the band’s inception was the late Noel Redding, who was the bassist for The Jimi Hendrix Experience. Noel tagged vocalist Neil Landon, drummer Eric Dillon, and multi-instrumentalist Jim Leverton to complete the band.

Fat Mattress got its first major exposure by touring with The Jimi Hendrix Experience as an opening act in the US. The band is best known by many for its vocal harmonies, thanks to Redding, Leverton, and Landon, all of whom could sing. Back home, the band attracted the attention of the German-British record label Polydor Records. Fat Mattress signed with the label and released its eponymous debut album soon after.

The band’s eponymous debut album peaked at number one hundred and thirty-four on the Billboard 200 albums chart. With a few songs in the album received well by rock fans, Fat Mattress received some commercial success. The album feels more of a satisfactory psychedelic release spiced up with elements of bluesy and folk rock. Some of the greatest hits from the album include “Magic Forest,” which was quite a hit in The Netherlands.

Fat Mattress would later attend several festivals where the band interacted with musicians from other acts. At the Isle of Wight Festival, Fat Mattress met with The Who, The Nice, Bob Dylan & The Band, and The Pretty Things. The band was also present at Roundhouse as David Bowie introduced his new ensemble, Hype. This event marked the birth of the glam rock music genre, as reviewed later by music journalists.

Tough times kicked in for Fat Mattress after the band’s founder Noel Redding had a fallout with the band’s multi-instrumentalist Jim Leverton. The result of this was the sudden departure of Noel Redding. Steve Hammond took his position. The band later recruited Mick Weaver, who took on the keyboard duties. Mick’s presence allowed Jim Leverton to shift his focus to the bass guitar and vocals. Would the band see better days without its founder?

It seems Noel Redding had gone away with the band’s dream since efforts to keep the ensemble atop in the flourishing rock scene failed. The band’s sophomore album Fat Mattress II was released in 1970. However, it performed poorly compared to the first album, failing to make it into the Billboard 200 albums chart. Eventually, Fat Mattress disbanded while recording music that would have been featured on the ensemble’s third studio album.

Opening our top 10 Fat Mattress songs is the hit “How Can I Live.” The song is featured on the band’s debut album Fat Mattress (1969). Noel Redding and Neil Landon teamed up to pen the lyrics to this song. The song feels quite sluggish but still amazing, thanks to the awe-inspiring vocal delivery. Like most of the songs by the band, “How Can I Live” exploits the potential of vocal harmonies. Again, Noel Redding, Neil Landon, and Jim Leverton combine their singings to deliver a magnificent vocal delivery for this song.

“Iridescent Butterfly” is a musical gem that brings out the best of Neil Landon’s songwriting skills. Unlike most of the songs by Fat Mattress, “Iridescent Butterfly” finds Neil Landon singing alone. The song seems to be alluding to someone who was quite special to the singer. Neil Landon uses the song’s title to refer to a soul whose rays of beauty seem to have illuminated his heart. Sadly, this beautiful butterfly is out of reach and doesn’t seem to be coming back any time soon.

Fat Mattress (1969) featured some of the best psychedelic rock hits from the band. “All Night Drinker” is one of the pure psychedelic hits that saw Fat Mattress receive some following back in the later ’60s. Jim Leverton and Neil Landon are credited with penning the lyrics to this love song. However, it seems it is not Beyoncé alone who got ‘drunk in love.’ “All Night Drinker” finds the singer confessing how desperate he needed love from a lady of his dreams.

We might have differing ambitions, but one thing that many wish for is a better life. Of course, the definition of a better life is relative, too, since we all have different experiences. However, the reward of a better life is what Fat Mattress mentions in the song: days of no pain and no sorrow of an aching heart. “Bright New Way” is a hope restoring calm ballad from the band’s debut album.

Number six on our top 10 Fat Mattress songs is the hit “I Don’t Mind.” The song is also featured on the band’s eponymous debut album. Noel Redding and Neil Landon team up in penning the lyrics and singing on the lead vocals. Once more, Fat Mattress allows us experience some awe-inspiring vocal harmonies, which make this song quite a hit.

#5- Black Sheep of the Family

Most of the best Fat Mattress songs were original hits penned by the band members. However, coming in at number five is one of the best covers done by Fat Mattress, “Black Sheep of the Family.” “Black Sheep of the Family” was a hit initially penned by Steve Hammond, who later joined the band to take Noel Redding’s position after his departure. However, the song was initially released by Quatermass.

#4- She Came in The Morning

Vocalist Neil Landon delivered some of his best vocals in the song “She Came in The Morning.” In almost four minutes, Landon gives a powerful performance in a song that features folk and psychedelic rock elements. Calm and ambient is the song’s natural feel having its instrumental delivered in a mid-tempo.

“Magic Forest” is one of the most popular songs from Fat Mattress. The song was penned by Jim Leverton and Neil Landon for the band’s eponymous debut album. Leverton and Landon team up once more on the lead vocals giving us a taste of vocal harmonies. The song was quite a hit in the Netherlands, where it rose to number eleven on the charts.

Fat Mattress’s sophomore studio album Fat Mattress II failed to outperform the band’s debut album. Even though it was poorly received by the masses out there, not everything about the album was negative. “Naturally” is a musical gem that you will find in the band’s album Fat Mattress II (1970). Unfortunately, Noel Redding left the band as it was recording the album. Luckily, his captivating guitar skills were captured in this song before leaving Fat Mattress, only to be replaced by Steve Hammond.

Number one on our top 10 Fat Mattress songs list is the hit “Mr. Moonshine.” The song was penned by Noel Redding and Neil Landon, having it featured on the band’s debut album. Redding and Landon deliver a mesmerizing vocal performance. “Mr. Moonshine” features the band’s best instrumental tune that feels quite catchy. The sweet guitar and vocal chops alongside sublime drumming by Eric Dillon add glamor to this ballad!