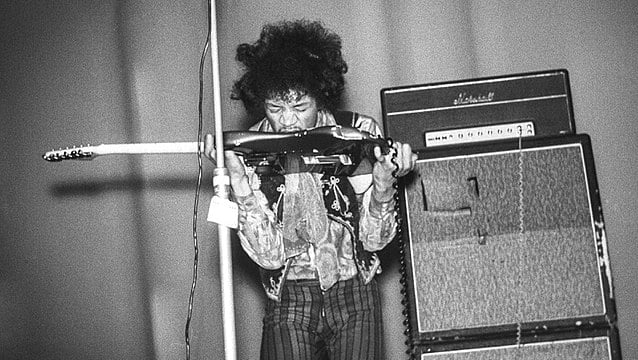 Simply the worst Jimi Hendrix posthumous albums ever released. Albums that took Jimi Hendrix recordings and overdubbed them with musicians who had never ever played with Jimi Hendrix before. Why? We only listed them to help you stay away from them.

An album released in 1980 of five Jimi Hendrix jam sessions that were unnamed. Producer Alan Douglas wound up naming the songs himself. A long list of musicians appeared on the album including Larry Lee on rhythm guitar, Jim McCarthy on guitar, Larry Young on organ, Billy Cox on bass, Dave Holland on base, Roland Robinson on base, Mitch Mitchell on drums, Buddy Miles on drums, Rocky Isaac on drums, Al Marks on percussion, Juma Sultan on percussion come on Dorado Villas on percussion and Devin Wilson on backing vocals

The most recent in a series of compilations of outtakes and unreleased material that the Jimi Hendrix family has been putting out. Released on March 9 2018. It’s hard to believe that Jimi Hendrix compilations are still being released from his private recordings. I guess it’s a good thing, especially for Jimi Hendrix fans. It’s good to keep his memory alive.

More recordings from the sessions for the fourth album supposably all unreleased takes and demos but found on bootlegs through the years. Who knows? Nice cover.

Another album of supposably unreleased material. For die hard Jimi Hendrix fans only who don’t mind the rough stuff. Most of the material on the album was recorded just before the experimental Electric Ladyland album

An album of rarities, outtakes and demos that actually is very enjoyable to listen too. Presented  in a very nice package by the Jimi Hendrix family.Loved the album cove on this one.

The first posthumous Jimi Hendrix release was the Cry Of Love album. The album featured songs that supposedly Jimi Hendrix was working on for his fourth album. The album featured 10 new Jimi Hendrix songs that had not been released before. It’s really the most complete posthumus Jimi Hendrix album released even though it’s hard to say what Jimi Hendrix might have done with these songs if he was still alive. Would he have released them, wood have he re-recorded the solo, redid the vocals changed the arrangements who knows?  The Cry Of Love album sold a half a million copies eventually the record went platinum selling 1 million.

On the first day of December in the year 1967 the Jimi Hendrix Experience released their second album entitled Axis: Bold As Love. It was only seven months earlier when the Jimi Hendrix Experience had released their debut album Are You Experienced that completely shock the world upon hearing of this incredible new talent.  The Axis: Bold As Love  album was pretty much just a continuation of what the band had done on their first record. Of course it wasn’t as groundbreaking as their first album nor as their third album which completely shifted gears in experimentation. No, Axis: Bold As Love just continued the band’s success in presenting thirteen more incredible rock and roll songs performed by three musicians on top of the world and playing like no one else had ever played before.

The songs on the album Axis: Bold As Love begin to show a little more maturity in Jimi Hendrix’s songwriting especially on the ballads like “Little Wing,” and the mid-tempo numbers like “Spanish Castle Magic.” There is more of a depth in the songwriting and the playing then there was on the first album. It’s hard to realize that he was writing songs like this in his mid 20s and can only make us imagine what he would have done if he had lived longer.

Electric Ladyland was the Jimi Hendrix Experience band’s final studio album. Sadly it was only the band’s third studio album. The album was released on October 16th 1968. It was recorded both at Olympic Studios in London and the Record Plant in New York City. The album was only released about nine days apart in the United Kingdom and the United States. There are many rock and roll fans and critics who believe this was the greatest album The Jimi Hendrix Experience ever released. It was definitely the most groundbreaking album and the most experimental and now serves as a reminder of what might have come next if Jimi Hendrix had not passed away.

Much has been written deservedly so about how The Beatles influenced recording techniques with the release of their Sgt. Pepper’s Lonely Hearts Club Band album. However, Jimi Hendrix did the same thing on this one when he and producer Eddie Kramer experimented with different microphone techniques and effects devices in creating a world of sound on vinyl that had never been heard before.

The songs themselves on Electric Ladyland really showcase all the different musical styles that had influenced Jimi Hendrix’s songwriting and guitar playing. Blues of course burns rapid on the album especially on the great jam tune “Voodoo Chile.” There is some R & B New Orleans style on the track “Come On.” Psychedelia is ever  present in songs  like “Burning Of The Midnight Lamp,” and the album opener “Have you ever been (To Electric ladyland)?” Of course one cannot fail to mention the Electric Ladyland album without bringing up the band’s biggest hit single of their career in the United States… a cover of Bob Dylan’s “All Along the Watchtower.” Overtime, the album Electric Ladyland has just grown more and more in statue and remains one of the great rock and roll gems of the 1960s. It’s one of the defining moments, and sadly, the final moment in the great career of Jimi Hendrix in the studio.

The album Are You Experienced was first released in the United Kingdom in May of 1967. It was later released in the United States in August of that same year. There was a big difference between both versions. The United States version contained the UK singles that weren’t on the UK album including “Purple Haze, Hey Joe and the Wind Cries Mary.” That’s a pretty significant difference. The US version contained the tracks “Purple Haze, Manic Depression, Hey Joe, Love or Confusion, May This Be Love, I don’t Live Today, The Wind Cries Mary, Fire, Third Stone From the Sun, Foxy lady and Are You Experienced.” and if you’re familiar with those songs we pretty much don’t have to say one more word about this album. The music says it all.

Are You Experienced was an album that delivered a sound that no one had ever heard before. Not one guitarist in history had ever played like Jimi Hendrix. How some of the record industry people who turned him away did not recognize his incredible once in a lifetime talent is almost incomprehensible but actually really not surprising when you have met many record industry people throughout your life. Jimi Hendrix  fused elements of blues, progressive and psychedelic music into a guitar sound that made use of distortion and feedback all mixed and blended together in creating a truly unique guitar sound. And of course, wrapping around that sound and creating an incredible rhythm section that drove it all home was bassist Noel Redding and Mitch Mitchell on drums.