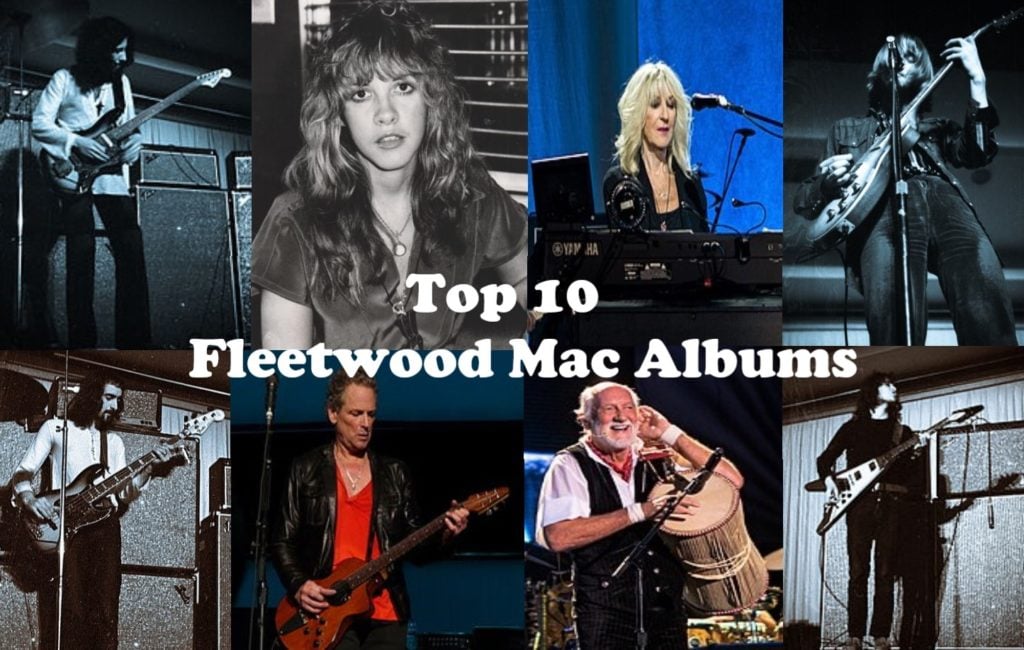 Photo credits at the end of the article.

There are three separate Fleetwood Mac fan bases. There are the fans from the early days who love the band’s albums before Stevie Nicks and Lindsay Buckingham joined the band. There are the fans that like everything from the point when Stevie Nicks and Lindsay Buckingham joined. And of course there are those that enjoy everything. This list is geared towards those who love all of the bands lineups and also those who are unfamiliar with many of the groups albums from all the periods.

This wont be easy, but it sure will be fun. These are our 10 favorite Fleetwood Mac albums. Let us know which ones you would have picked.

We open up our top 10 Fleetwood Mac albums with the Fleetwood Mac album The Dance. Yes, we know it’s a live album. We usually never put live albums on our top 10 list; we usually reserve them for the live album lists. However, Fleetwood Mac’s album The Dance was very significant in many ways. It had been ten years since the mid-seventies classic lineup had played together. Fleetwood Mac fans went crazy over this. The album shot straight to number one on the Billboard album charts. It became the fifth biggest selling live album of all time. It was nominated for multiple Grammy Awards. Three big singles were released from the album including the unreleased track “Silver Springs.”

The accompanying video was chilling in the way Stevie Nicks stared down Lindsey Buckingham throughout the night. It was equally fascinating the way Buckingham responded. You could see the tension, sense the love and feel the hate. Everything that made Fleetwood Mac as great as they were in the 1970s was on display in this concert and displayed in that video. How could we leave The Dance one off this list?

Continuing with our top 10 Fleetwood Mac albums we turn to the album Mystery To Me. The album was released in October of 1973. The album featured the classic Fleetwood Mac song “Hypnotized.” The line up in the band at this point in time consisted of Mick Fleetwood on drums, John McVie on bass, Christine McVie on keyboards and Bob Welch and Bob Weston on guitars.

The Fleetwood Mac album Bare Trees was released in March of 1972. At the time of release the band that performed on the album consisted of Mick Fleetwood on drums, John McVie on bass, Christine McVie on keyboards and Bob Welch and Danny Kirwan on guitars. The Bare Treess album would be Danny Kirwan’s final album with the band. The album did extremely well having gone Gold when it was released. It would later benefit from the success of the Stevie Nicks / Lindsey Buckingham era as fans of that band brought back catalog sending Bare Trees to achieve platinum selling status.

The Fleetwood Mac album Bare Trees contained one of the most loved Fleetwood Mac songs from the pre Stevie Nicks / Lindsey Buckingham era. Bob Welch’s song “Sentimental Lady,” was one of the standout tracks on the album. Other standout tracks included Kirwans’ “Child of Mine” “Dust,” and Sunny Side Of Heaven. Christine McVie”s songs “Homeward Bound” and “Spare Me a Little of Your Love” were also album highlights.

Tango In The Night is the first Stevie Nicks / Lindsey Buckingham era Fleetwood Mac album to be presented on this Fleetwood Mac albums list. The Tango In The Night album was released in April of 1987. The album is historic in the sense that it was the last Fleetwood Mac studio album that utilized the multi million dollar lineup of Mick Fleetwood, Christine McVie, John McVie, Stevie Nicks and Lindsey Buckingham. The group did release The Dance album in 1997 but as previously written that was a live album based on a reunion.

There needed to be a spot on this top 10 Fleetwood Mac albums list for the band’s debut album in 1968. Fleetwood Mac has released so many great and distinctively different albums throughout  their career, it proved difficult figuring out where to place their debut album. In the end we felt it was best to place it right in the middle. The band debut album titled Peter Green’s Fleetwood Mac was a wonderful blues albums that was very reflective of the late 1960s English Blues scene.

Three of the musicians on the album Mick Fleetwood, John McVie and Peter Green had originally been members of the John Mayall & the Bluesbreakers band. After breaking away form John Mayall, Peter Green, Mick Fleetwood, John McVie, Jeremy Spencer and Bob Brunning made one of the greatest blues rock albums of the 1960s. Over time, the album’s legacy has grown even stronger as more rock fans discover this incredible album.

Fleetwood Mac was in a tough spot after the success of the Rumours album. How does a band follow up an album that broke all sales records and stood as one of the greatest albums released in an entire decade? The band’s response was too write and record as many songs as they could. That response resulted in the release of a double album called Tusk. What was interesting about the Tusk album was the band’s intent on not repeating the formula that was so successful on Rumours.

We would see a similar artistic intent a few years late when Springsteen followed up Born In The U.S.A. with Tunnel of Love and Prince followed up Purple Rain with Around the World in a Day. Both artists had the albums of their careers like Fleetwood Mac had with Rumours . Yet,  both Springsteen and Prince decided to go in a completely different artistic direction that would prove to be nowhere as successful as their previous hits albums just like Fleetwood Mac did with Tusk,

Was it a smart move to go experimental on Tusk instead of repeating the Rumours formula? Well that’s up to you to decide. Tusk was a great album. However it would have been real interesting to hear Rumours II. Or than again, maybe not.

The Mirage album by Fleetwood Mac was released in June of 1982. Mirage is a really good Fleetwood Mac album that is too often ignored by fans and critics. The album contains one of Stevie Nicks most heartfelt and beautiful songs in her composition and recording of the song “Gypsy.” That one stands as one of our favorite Stevie Nicks songs of all time. There’s also Christine McVie’s big hit “Hold Me,” which hit the Billboard top 10 on the Hot 100 charts in 1982. The song was so popular it stayed in the top 10 for seven consecutive weeks.

Lindsey Buckingham was a dominate force on the album composing five songs and singing lead on four of them. Fleetwood Mac’s Mirage album presented fans with twelve great new Fleetwood Mac songs that defined a very even album of great music and performances by each member. They may have all been releasing solo albums and immersed in outside relationships, but when the band came together as one, they were still a musical powerhouse.

As all Fleetwood Mac fans know, the album entitled Fleetwood Mac which was released in 1975 was Steve Nicks and Lindsey Buckingham’s debut album with the band. It was an incredibly successful album that stands as the first record that turn on a mass audience to the band Fleetwood Mac. However that mass audience was not found immediately upon release of the album. The band toured ferociously in order to promote the record.

If there ever was an example of why it was so important to promote a record by touring, one only has to look at the success of the 1975 Fleetwood Mac album. Over time as the band continued to tour the record started to take hold. It’s obvious that the band initially was not aware of the cult following  that would soon latch onto Steve Nicks. The albums first couple of singles “Warm Ways,” and “Over My Head,” were written and sung by Christine McVie.

With the release of the single “Rhiannon,” heads began to turn. The song got many people interested in discovering the other Stevie Nicks songs on the record such as “Landslide. There’s no doubt that the magical sound of Steve Nicks voice turned so many people on to the band. Of course the harmonies were outstanding as well as all the other songs written by the band. The performances were top notch. But in the end, it was the sound and look of Steve Nicks that defined so much of what was to come from the group.

The Fleetwood Mac album Then Play On is easily Fleetwood Mac’s most underrated album. It has stood in the shadows of the 1975 to 1987 lineup for far too long. Then Play On was the quintessential Fleetwood Mac album of the late 1960s that combined the band’s blues power with idea of psychedelia and simply great songwriting and performances. The album featured the musicians Peter Green on guitar and vocals, Danny Kirwan on guitar and vocals, John McVie on bass, Mick Fleetwood on drums and a single appearance by Jeremy Spencer on piano.

Fleetwood Mac’s Rumours album was released in February of 1977. It’s safe to say that while the band absolutely realized they had just completed a great album, they probably had no idea of the incredible success the album would achieve both commercially and critically. Rumours would not just stand as the most successful album released in the year 1977, it would become one of the top albums of the decade while standing as the bands greatest musical achievements.

Fleetwood Mac’s Rumours album reached the number one spot on the Billboard Top 200 albums charts and stayed there for thirty one straight weeks. That’s an incredible run. The album’s success was fueled by many factors. One of them was hit singles. The Rumours album spawned four top 10 singles with the songs “Go Your Own Way” (issued two months before the album was released), “Dreams,” “Don’t Stop,” and “You Make Loving Fun”

Another factor was the soap opera affect. People love to hear gossip and juicy stories about relationships. There was no shortage of reporting on all the romantic struggles that went on in the band during the recording of Rumours . It was within these struggles that supposedly so many of the albums wonderful songs were cast.

In Classic Rock History there have been a handful albums that fueled new musical trends and or styles, or at least established the pathway for certain artists to become some of the biggest stars of all time. Fleetwood Mac’s Rumours was the album that elevated the band to a place that only a handful of musical artists stand. It was incredibly wonderful to be sixteen years old at the time and watch it all unfold. Its even more wonderful to be fifty eight and still listening with as much joy as i did when I was sixteen. I’m sure millions of other music fans feel the same way.

Heroes Are Hard to Find

Tango in the Night

Live At The BBC