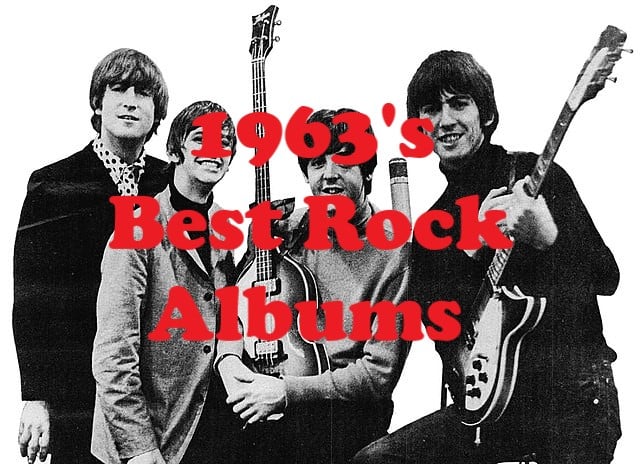 1963’s Best Rock Albums list is the one we have been waiting to compose. And that my friends is for one big reason, The Beatles! Yes, 1963 is the year that The Beatles released their first album Please Please Me on EMI’s Parlophone Record label on March 22nd 1963 in the United Kingdom. From that point on rock and roll would never be the same…eventually. Eight months later The Beatles released their second album titled With The Beatles. Soon, hundreds of bands on both sides of the Atlantic would follow in their footsteps although never coming close to wearing the same size shoes. Some did get close, like The Rolling Stones. However, in a recent interview with Howard Stern in the middle of this coronavirus pandemic,  Paul McCartney was asked by Stern who was better, “the Beatles or the Stones?” McCartney responded,”The Beatles of course.” We happen to agree.

Looking back at 1963’s Rock albums we see evidence of small changes in music. The Beatles two albums would have more of an impact on the music of 1964 and on, than it did in 1963. The Gerry and the Pacemakers album was clearly inspired by the Beatles, but most of the other year’s records were based on other trends. The twist craze of 1962 had died out but the surfing trends that began that year really took off in 1963 with the sounds of Dick Dale, The Ventures, The Safaris and most importantly the big time arrival of the Beach Boy who released four albums in 1963.

The voices of Dion and Roy Orbison continued to release new music that utilized their magnificent vocal chords wrapped in poignant and memorable original songs. The sound of Motown, R&B and Soul continued to be a dominant force in music with artists like Stevie Wonder, The Miracles, Martha and the Vandellas, Ray Charles, Ike & Tina Turner, Solomon Burke and James Brown released every successful and much loved albums.

# 16 – Laughing on the Outside – Aretha Franklin

# 15 –The Fabulous Miracles – The Miracles

# 13 – Come and Get These Memories – Martha and the Vandellas