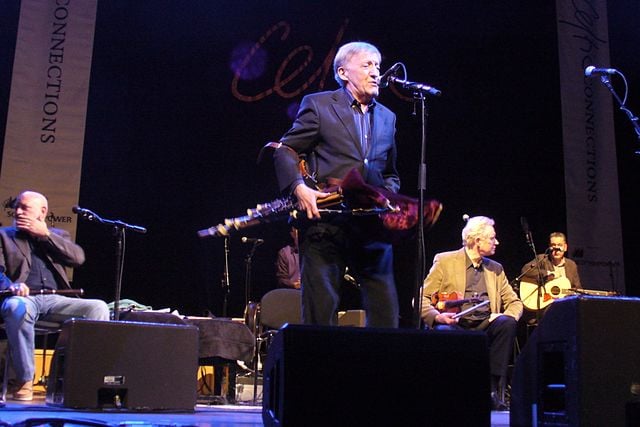 Here at Classic Rock we have something a little different with our Top Ten Songs from The Chieftains, a traditional Irish folk group whose music is almost entirely instrumental. They have received much acclaim throughout their career and are seen as being responsible for bringing traditional Irish music to a more mainstream audience.

The Chieftains were formed in 1962 by Paddy Moloney and gradually started to have a successful career that flourished in the 1970’s and then continued into the eighties and beyond. They are known for their collaborations with many other artists. Among them are Luciano Pavarotti, The Rolling Stones, Madonna and Ry Cooder of whom one of their collaboration was included in our top ten list of his songs.

Some of these collaborations will be included on this list. So without further ado lets look at what made the cut…

Kicking off our Chieftains songs list we have a song that many will probably know is not originally by the Chieftains. It is a traditional Irish folk song which has had many versions over the years. Unfortunately, the most well known version is probably the rather hideous version by the Swedish Euro-pop band The Rednex. This is a much better version which was the title track of their tenth album The Chieftains 10: Cotton Eyed Joe released in 1981. A later version was recorded in 1992 with Ricky Skaggs on vocals on the album Another Country for which it received a Grammy Nomination for Best Country Vocal Collaboration.

This track is the title track of The Chieftains ninth album The Chieftains 9: Boil The Breakfast Early released in 1979. This album saw the group change their sound a lot, most probably due to the fact that founding members Sean Tots and Michael Turnby had both left the group between the last album and this one.

This track is taken from the Chieftains eighth album The Chieftains 8 released in 1978. It was originally recorded for Claddagh Records and later re-released on Columbia. It was both Potts and Turnby’s last album with the band. They notably performed this song on “Saturday Night Live” in 1979.

This track was originally featured on the Chieftain’s seventh album The Chieftains 7 released in 1977. This was the first album to feature Kevin Conneth as a full time member of the band. They would later re-record this track in 1995 for the soundtrack to movie Rob Roy starring Irish actor Liam Neeson.

Next we have another title track which is the title track of The Chieftain’s sixth album The Chieftains 6: Bonaparte’s Retreat released in 1976. It is another that is not originally by The Chieftains but is an ancient traditional number of which the original composer is unknown. This album is their first to feature singing, with this having vocals by Dolores Keane.

This is the closing track of an album that The Chieftains released in 1985 titled The Chieftains in China. The band first visited the country in 1983 and were the first Irish group to do so as well as the first Western group to play on the Great Wall. This visit came about in 1980 when diplomats from the Chinese Embassy in London attended a festival where the Chieftains were performing and enjoyed the performance so much that they invited them to China to tour. However, as there was no Chinese embassy in Ireland at the time, doing so was difficult. Yet,  it was able to happen after China established diplomatic relations with Ireland a year later and thus both musical and social history was made. The album is a compilation of songs that the band played whilst there with various Chinese orchestras as well more impromptu musicians. It was released two years after being recorded.

This is the title track of what is actually a Van Morrison album that he collaborated with The Chieftains on released in 1988 which reached number eighteen on the UK album charts. Van Morrison had met The Chieftains years earlier at a rock festival in Scotland and for years they had been discussing making an album together. Although this is an original track, most of the album is comprised of recordings of old Irish folk songs.

Here at number three we have a track featuring the legendary Rolling Stones frontman Mick Jagger that is taken from The Long Black Veil released in 1995. Possibly due to the collaborative artists involved, it is the most popular and high selling Chieftains album and reached number seventeen on the Irish album charts. In addition to this track, there is also the song featuring Van Morrison titled “Have I Told You Lately?” which won the 1996 Grammy Award for Best Pop Collaboration with Vocals. Other people on the album include Sinead O’Connor, Marianne Faithfull, Sting and Tom Jones.

This track is the opening number of The Chieftains most recent album released in 2012 titled Voice of Ages which was a collection of collaborations with a variety of other artists some of which were Irish of which this is one with Irish singer Imelda May. Others featured on it include Bon Iver, The Civil Wars and Paulo Nutini.

At number one on our Chieftains songs list is the twelve minute- epically titled “Finale” which is the closing track from The Chieftains album released in 2010 titled San Patricio which was a collaborative album with Ry Cooder and also featured many other guest musicians among them Liam Neeson. It is a concept album which tells the story of San Patricio battalion who were a group of Irish immigrant soldiers who deserted the US army to fight on the Mexican side of the Mexican-American war that took place in the 1840’s.

Top 10 Songs By The Chieftains article published on Classic RockHistory.com© 2021