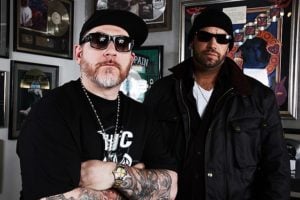 With our top ten House of Pain songs list we look at an Irish-American hip hop band who are known for their hit “Jump Around” released in 1992. They were formed in 1991 by rapper Everlast, DJ Lethal and fellow rapper Danny Boy in Los Angeles. Within a year of their formation, they were signed to Tommy Boy Records and in 1992 their self-titled debut album was released which featured “Jump Around.” In 1993, they recorded a song together with Helmet for the soundtrack to the film Judgement Night.

The next year in 1994 they released their second album Same As It Ever Was which reached gold status despite having no hit singles. After the release of their third album Truth Crushed To Earth Shall Rise Again, they abruptly broke up.

After the breakup of the band, all of the members embarked on their own different careers. Danny Boy retired from music and formed an art company. DJ Lethal would go on the have massive success as the turntablist of Limp Bizkit who were one of the biggest bands of the nu metal movement. Everlast went on to have a successful solo career. All three members reunited in La Coka Nostra which included other members Ill Bill, Non Phixion and Slaine.

In 2010, House of Pain reformed and played several shows throughout the next year. Their most recent activity was when they embarked on a twenty-fifth anniversary tour in 2017. Here is a list of their ten best songs.

Kicking off our top ten House of Pain songs list is this track taken from their self-titled debut album released in 1992. Named after member Danny Boy, it is a song that proves that he is not an inferior member of House of Pain like some people believe. The song is also a testament to the band’s Irish roots with both the members stage name and the song being a homage to the traditional Irish song “Danny Boy.”

Up next is a song from the third and final House of Pain album Truth Crushed To Earth Shall Rise Again which features Guru from Gang Starr. The now deceased rapper expresses his love for House of Pain by making references to their previous hits throughout the song. The song goes into Everlast’s interests in spirituality which he would explore later in his solo career.

Next is another track from the first album which is another homage to the band’s Irish roots. It is a song that about fighting stereotypes, presumably taken from derogatory remarks that the band members faced during their formative years. Despite this, it is also a positive song, showing that they are proud of their roots.

This next track was not featured on any of the band’s albums but was the title track of the soundtrack to the movie of the same name released in 1993 starring Dr Dre. In the movie, the band made a cameo appearance along with many other rap stars of the time. Although the movie was a comedy, this is a serious song and a brilliant hip hop track.

Next up we have a track taken from the second album Same As It Ever Was released in 1994. It was the lead single to be taken from the album. Despite the fact that the record was not as successful as the first, this song became a staple of House Of Pain’s live shows. This song is notable as being the only one in the entire House Of Pain discography to feature a rap verse from DJ Lethal.

This song is also taken from the second album and is a reaction to rumors that spread around that Everlast had died of a heroin overdose. He is clearly on fire here, as his mood on this song is one of sarcasm with a hint of anger. The fact that this song was written long before the internet was around to spread false rumors makes the song very ahead of its time.

Here we have yet another song from the second album which is another fired up track that references a feud that House Of Pain had with fellow hip hop artist DJ Quik. They had originally dissed him in a remix of “Shamrocks and Shenanigans” and he in turn responded to them in a song that cannot be printed here due to its title. However, House of Pain ultimately won the beef with this song with a single line that the Compton rapper never responded to.

At number three is this collaboration with alternative metal band Helmet that featured on the Judgement Night soundtrack released in 1993. In addition to the original version of the song, the single included a couple of remixes by T-Ray that also appeared on the B Side to Faith No More and Boo Ya T.R.I.B.E.S “Another Body Murdered” which also appeared on the movie’s soundtrack.

Just off the top spot is a song taken from the first album that was its second single after “Jump Around.” In addition to the original song, there is also a rock remix which was done by Butch Vig who is best known as a member of the band Garbage and also the producer of Nirvana’s Nevermind. The video to the song featured an introduction from comedian Dennis Leary.

Topping off this House of Pain list is the band’s signature song taken from the first album. It was produced by DJ Muggs of Cypress Hill who also produced the song. Upon its release, it was a massive hit, reaching number three in the US. Although it was only a minor hit in the UK upon its initial release, it was more successful after a re-release in 1993 after which it got to number eight. It is generally regarded as a classic hip hop song and has received many accolades over the years, being featured in many all time best lists in various publications. It has also been a popular song in clubs over the years.

It was DJ Muggs who actually came up with the song first and offered it to House Of Pain after Cypress Hill did not want it. The song contains several samples and was well received by critics at the time of its release. The music video to it was filmed during the New York City Saint Patrick’s Day Parade of 1992.