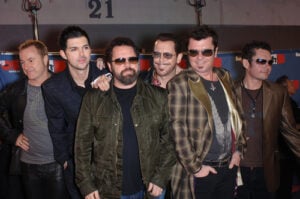 INXS in their heyday was a band of six members that played guitar-riff, synth sounding rock and ballads with an infusion of saxophone jazz influence from band member Kirk Pengilly. They had an abundance of big radio hits. They extended their run of success until 1997 through 10 albums with Michael Hutchence at the helm of the band.

Often, though, the focus for INXS is only on the hits. This was a tremendous band. With ten studio albums cut prior to Hutchence’s death, we can assume there are plenty of deep cuts or lesser-known singles to wrap our minds around.

The songs from this list are looking past all the well-known great singles that we can figure out on the first few notes. This list is aiming for a heavier dig into their album-oriented music. However, because of the focus of this article on 80s music, the search for deep cuts is narrowed to their first six albums released from 1980 to 1987.

Beginning in 1980 with their eponymous album titled INXS, the band showed a taste for rock and timing for how to produce a single. Though none of the songs on their first album produced a big flash for the charts, it is obvious they had the knack to make hit songs. The freshness of their sound and of Hutchence’s voice is pleasing to the rock ear. The album showed their depth of potential and sound. The very first song from their first album, ‘On The Bus’, holds it together well forty years on.

The Album, The Swing, had a huge hit in ‘Original Sin.’ Darryl Hall did backing vocals for the song. By this time in 1984, the band had the attention of some of rock’s heavyweights. In the recording industry, INXS were known for their new wave genre sound. The second single from the album, I Send A Message could be labeled the prototypical song of new wave. It has all the characteristics, including careful pauses for emphasis.

The title song from the 1981 album is a low-fi delight. Hutchence shows his strength in matching the tempo with smooth, silky vocals. The bass from Gary Beers is steady, but the melody is a subtle, under-the-covers type of beat that just keeps us listening. The song shows the diversity of the sound of INXS. They were able to layer their music to differentiate grooves and be as distinct as they needed to be for the development of the song.

Listen Like Thieves, the album, dropped in 1985. ‘What You Need’ was the big single from the album. If it weren’t for their next album, Kick, one could say this is the quintessential mainstream pop/rock album of the 1980s. The album had a flow to it that was trendy and appealing to the masses. ‘Shine Like It Does’ is a softer sound for the band. It’s a hidden gem of a ballad.

From their second album, Underneath The Colors, ‘Horizons’ continues their subdued sound of heavy bass and synth, but with an uplifting, periodic chorus bringing us along in this five-minute piece of music. This song keeps us guessing. There is a bluesy application here, reminiscent of The Rolling Stones. Mick Jagger is probably the best comparison of styles for what Hutchence does overall for INXS.

This song just oozes INXS sound. Right away, there is a pleasure beat with Hutchence coming in with harmony soon after. He rises to the occasion with vocal strikes when needed. There’s not a huge chord shift. The song is steady throughout. Hutchence matches the intensity with his own engagement of zip to figure out how to keep the song on target as a catchy tune.

This song was released as a single from the album, Kick, but there were so many singles from the album that it is hard to keep up with all of them. ‘The Loved One’ was not one of the most popular songs from Kick. Others took more notice, like ‘Need You Tonight.’ But, it is easy to fall for this more obscure single with a steady drumline from Jon Farris. We think it’s a ballad, but boy is it heavy on progressive guitar riffs from Tim Farris. Hutchence sings it like he is flirting with the audience. He is a sex symbol at this point in his career, for sure.

One of the greatest rock albums of all time, Kick remained on the charts for 81 weeks. Released in 1987, it produced huge rock anthems, like ‘New Sensation’ and ‘Devil Inside.’ How ‘Calling All Nations’ wasn’t part of the hit singles parade from that album is hard to understand. This song has top 40 written and sounding all over it. Probably, there were just too many great songs on Kick. A trendy hook is there from the start. Hutchence brings it along the whole way with his dominant heart and soul voice.

Arguably, the most in-your-face, hard-rock melody that the band produced was this short to the point lead song from Kick. There’s quite a contrast here to their huge hit ‘Never Tear Us Apart’ from the same album. Hutchence can’t be mistaken here as one of the best lead vocals of a rock band of all time. His showmanship combined with his ability to foreshadow how songs should be sung makes him unique in the rock pantheon. As a songwriting team, he and Andrew Farriss, the main keyboard player and one of the guitar players for the band, were a perfect match to guide INXS along in their quest for rock stardom.

For the deepest of deepest cuts, we go all the way back to their first album. ‘Learn To Smile’ just turns you on from the get-go. The greatness in the freshness of this 42 year old song is that it goes on for almost five minutes. It comes back for a third verse when most songs wouldn’t. The band is learning their place with how to complement each other with their instruments just as they learn to smile alongside each other.