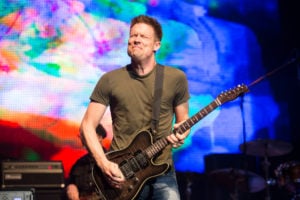 Our top 10 Jonny Lang songs list presents the music of a Grammy Award-winning singer-songwriter who has been on the music scene since 1995. Born in 1981, Jonny Lang showed his passion for music when he started playing the guitar for his buddies at age twelve. His father played a significant role in his love for music having him take Jonny Lang to see Bad Medicine Blues Band, one of the most reputable acts in the city of Fargo. Here, Jonny Lang would hone his guitar skills thanks to the interaction with Ted Larsen, who was the band’s guitarist.

Amazingly, young Jonny Lang joined the band, and its members saw it wise to rebrand their act. The band changed its name to Kid Jonny Lang & The Big Bang. Jonny Lang was quite a sensation to watch on live shows. Through this, he caught the attention of A&M Records, who awarded him a recording contract having him meet other young artists such as Derek Trucks and Kenny Wayne Shepherd on the label. Within a year of being signed to the label, he released the album Lie to Me (1997). The album became quite popular, having Jonny Lang’s name become popular on the blues scene when he was just a teen.

Jonny Lang was quick to release his studio album, Wander This World (1998), to build on the success that he had achieved with Lie to Me (1997). The album was also critically acclaimed, bringing Jonny Lang even more fame to his name and art. Wander This World (1998) was nominated for a Grammy Award for the Best Contemporary Blues Album in 2000. However, it lost to Take Your Shoes Off (1999) by Robert Cray. Other albums that were nominated for the award that year included Live in Chicago (1999) by Luther Allison, Welcome to Little Milton (1999) by Little Milton, and Continental Drifter (1999) by Charlie Musselwhite.

While Jonny Lang’s songs were primarily featured blues elements, his next album, Long Time Coming (2003), added some Christian and R&B elements. He also featured a cover of “Dying to Live” by Edgar Winter in the album.

More success followed Jonny Lang after he released Turn Around (2006). The album rose to number thirty-five on the Billboard 200 Album Chart. Incredibly, it peaked at number one on the Billboard Christian Album. The album was nominated for a Grammy award for the Best Rock or Rap Gospel Album (now split into Best Gospel Album and Best Contemporary Christian Music Album). Turn Around (2006) won the award ahead of nominated albums by Red, T-Bone, DecembeRadio, and Sarah Kelly.

Jonny Lang has since then released three more albums, with his recent being Signs (2017). Throughout his career, he has toured with other reputable artists such as B. B. King, Sting, The Rolling Stones, and Buddy Guy, to name a few. Here are the best Jonny Lang songs that showcase his outstanding talent on the guitar and vocals.

Opening our top 10 Jonny Lang songs is the inspirational hit “A Quitter Never Wins.” The song was initially released by incredible blues artist Tinsley Ellis on his album Storm Warning (1994). Taking on a song released by one of the most reputable figures on the blues scene gifted the then-young Jonny Lang fame and saw his album Lie to Me (1997) receive critical acclaimed.

“Make It Move” is one of the best Jonny Lang songs from his most recent album, Signs (2017). This blues artist has been one of the few icons who have moved above the limitation of the blues scene by spicing it up with rock, folk, R&B, and gospel elements. Through this, Jonny Lang has been able to keep his music fresh and entertaining, rising above the blues cliché. “Make It Move” finds Jonny Lang singing about the need to solve problems we encounter rather than fold our hands and wait for miracles to happen.

Jonny Lang was still a teen when he released the album Wander This World (1998). The title song to the album towers above most of the songs in the album, bringing some of the best blues vibes. While the song features some of the most touching lyrics, its rabble-rousing guitar work makes it even better. Eventually, the album Wander This World (1998) saw Jonny Lang add to the list of teenage artists to receive a Grammy Award nomination.

“Only A Man” is a musical gem featured on Jonny Lang’s album Turn Around (2006). Jonny Lang showcased his moving songwriting skills when he penned the lyrics to this ballad. The album features songs that find Jonny Lang returning to the Christian religion. “Only A Man” helps him offer us an insight into his life and what brought him to the place he was before turning to God again. In the song, he asks Jesus to rescue him again.

Number six on our top 10 Jonny Lang songs is the ballad “Walking Away.” The song is featured on the album, Wander This World (1998). “Walking Away” finds Jonny Lang offering an honest view of an affectionate yet disturbed relationship. Its lyrical content was quite amazing coming from a teenager. Jonny Lang co-wrote the song with Jerry Lynn Williams.

We stride back to the album Lie to Me (1997), where we find the tuneful hit “Missing Your Love.” With this song, Jonny Lang gives quite a heartfelt performance as you can hear him pour emotions with his vocals. While most of his songs at that time featured blues elements primarily, “Missing Your Love” feels a little more like a pop-radio ballad.

Long Time Coming (2003) might not have been mentioned heavily in our top 10 Jonny Lang songs list. This doesn’t mean that the songs in it were any less great compared to other releases. Among the songs in the album, one of the most memorable gems is the hit “Red Light.” The song finds Jonny Lang contemplating stopping something bad for him. Some can remember him playing this hit on the Late Show with David Letterman.

“Breakin’ Me” is one of the best Jonny Lang songs from the album Wander This World (1998). The song finds him showing some emotional insight. It is penned in the context of a guy who leaves his girlfriend, only to realize how much he misses her later in life. The fact that she won’t be coming back makes life even tougher for the guy who misses her more.

Wander This World (1998) lost the Grammy Award for the Best Contemporary Blues Album in 2000 to a Robert Cray album. However, it remains Jonny Lang’s most popular album to date, thanks to its array of great hits, including our number two-song “Still Rainin’.” One thing that stands out in this song is the heavy guitar riffs Jonny Lang delivers. The song served as the perfect introduction to the rejuvenated teen artist, thanks to his magical vocals. Jonny Lang spices up this hit with amazing solos in this thundering ballad.

Number one on our top 10 Jonny Lang songs list is the album-titled hit “Lie to Me.” Jonny Lang rose to fame with this hit when he was just a teenager. The song alludes to a guy in distress following his collapsing relationship. Full of desperation, the guy asks the lady to lie to him to allow him to feel that everything will be alright. Jonny Lang revealed in an interview that the song was not personal, having his personal songs come when he was in his twenties.