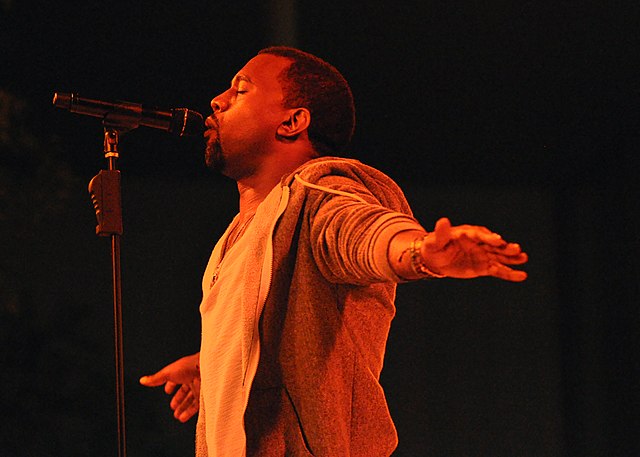 Kanye West,whose original name is Kanye Omari West, was born on 8th June 1977 in, Atlanta Georgia. He is an American rapper, producer, and fashion designer who escalated his production success in the early 2000s as a famous critically acclaimed solo artist.

West attended Chicago State University for just one year and dropped to pursue music as a career. Kanye established his name with his production work for Roc-A-Fella Records mostly on Jay-Z’s album- Blueprint which was released in 2001. Kanye’s skillful use of accelerated beats made him much in demand as a producer, but he struggled to establish himself as a rapper due to the perception that his middle-class background could not give him credibility as a rapper.

Finally, he released his debut solo album called “The College Dropout” in 2004 which was a massive success. A track in this album “Jesus” walks won a grammy award for the best rap song the following year. Since then Kanye West’s success has been unmatched and his songs have earned him huge amounts of money. Below are his top 10 songs:

Peaking at number ten on our top ten Kanye West songs is “Good Life.” This song is incredible with an amazing flow of rhythm. This Song by Kanye featuring T-pain was released on 2nd October 2007 as the 3rd single for his studio album known as Graduation

In the song lyrics, Kanye West is celebrating the finer things in his life and acknowledges his success as “Good Life.” The song peaked at position 7 on Billboard Hot 100 and again at number 23 on the UK Singles Chart. Additionally, “Good Life” earned a nomination at the fiftieth Grammy Awards for the Best Rap Song and the Best Rap Performance winning the former. The killer lyrics” Y’all pop the trunk, I pop the hood, Ferrari” clearly shows how indeed West has had a “Good Life.”

Kanye West working with his co-producers Karriem Riggins and Mike Dean used Arthur Russel’s song “Answer Me” to make “30 Hours.” The song is featured in “The Life of Pablo ” album. There is something unique about comparing failures and struggles. In this track, West describes the Long drive that starts from Chicago to Los Angeles, a bunch of Popeyes that finished when he just needed it, an open relationship that burst in his face, to what Arthur Russel went through.

The outstanding thing about Kanye West and his hip-hop music is the merging or collision of ideas as well as the emotions that arise in mysterious, uncomfortable, cryptic contiguity. The effect of this song that is built around Arthur Russell’s almost indistinguishable lyrics and then uplifted by West’s attitude is impossible to let pass. The song was released in 2016 and upon its release, it debuted at position six on the US Billboard under R&B/Hip-Hop Singles.

At number eight is this amazing track “Black Skinhead.” We all agree that West loves talking about himself, but the amazing thing is that he is very good at it. The Black Skinhead” which Kanye West labels as his “theme song” is the perfect example of Ye on Ye. Kanye said back in 2013 that his verse on ” Black Skinhead” was precisely the best or rather greatest rap verse of all time.

Although this is an open debate the track is unforgettable and it definitely influenced popular music greatly. The kicker in this song is that he uses his self-congratulatory stylings to dig deeper at the US societal issues. In his killer line, he says, “Middle America packed in, came to see me in my black skin… If I don’t get ran out by Catholics, here come some conservative Baptists.”

This song is very entertaining and is featured in his sixth studio album Yeezus. The song debuted at position 69 on Billboard Hot 100 and peaked at number 21 on the US Hot R&B/Hip-Hop Songs chart. The song reached number 66 on Canadian Hot 100.

” Real Friends” by Kanye West is remarkable. The transition that West made from “FML” into “Real Friends” is something admirable. If you can recall, when this track dropped on Ye’s SoundCloud before the album itself dropped, it resulted or rather created social media bedlam including uncontrollable excitement from Ye’s harshest critics. Even today, it remains one of the best songs you play on your first day mid-session.

This song by West featuring Ty Dolla Sign is in “The Life of Pablo.” Kanye is clear that he has now crossed things off the domestic bliss checklist that he was worried about during the time of 808s and Heartbreak From verse to verse the track deteriorates the way West’s other relationships did. From the second and third verse, Ty Dolla Sign comes in to complete other Kanye’s lines and phrases.

This song by Kanye West was featured as his final track from Yeezus, his sixth studio album. “Bound 2” features vocals from Charlie Wilson- an American soul singer.

It was clear that West’s Yeezus album was known for its exasperating industrial sound. The album was experimental and with a rugged texture. This threw his audience for a loop. The fans did not get it and even it took them quite some time to understand.

But after Kanye released this last song “Bound 2” fans are always asking or rather have wanted that old album back for the last song. Kanye gave us his old soul sound once again. This was the sound that every fan fell in love with West for. “Bound 2” will always be remembered for its music video hitting the headlines as the nude Kim Kardashian is riding West and his motorcycle in the entire Americana-themed clip. The song peaked at number 12 on Billboard Hot 100.

This is a song by the iconic rappers from America- Jay-Z and Kanye West from their collaborative album released in 2011 “Watch the Throne.” The track was a two-part song dealing with different topics, all revolving around being an African-American in the US. Although both parts sounded completely different, they were merged to tell a story.

The first half of the track “Murder” told a story about black-on-black violence. Jay-z expounds on the rising murder rate in Chicago his hometown. “I feel the pain in my city wherever I go/314 soldiers died in Iraq, 509 died in Chicago.” The latter half is about “Excellence” and focuses on black success, excellence, and wealth in the middle of adversity. Despite blacks climbing to the top, still racism is at its peak in America.

I think it is interesting to know that Kanye borrowed the line, “I’m from the murder capital/where they murder for capital” from Jay-Z who had borrowed it from J Bump.

At number four is this fan-favorite song “White Dress.” Without a doubt, marriage is not for the faint-hearted, it is a grown man sport.and West got his grown and sexy by hitching his wagon to his lover- Kim Kardashian in May 2014. This is a true powerhouse couple. They appear to be very happy and only seem to have made each other even better. Kanye’s love for Kardashian is clearly shown when he lets Kim and her sister executive produce his next album.

Kanye tackled this thought or rather the idea of marriage on this track “White Dress” two years before finally tying the knot. This song was produced by Tapez, RZA, Boogz, and West and appeared on The Man With The Iron Fists Soundtracks.

Peaking at position three on our top ten Kanye West songs is not an easy feat but “Spaceship” managed it here effortlessly. This song by West featuring GLC and Consequence from Kanye’s debut studio album known as “The College Dropout” was released in 2004. Kanye West’s star had risen over a long period and it is unimaginable that there was a time when he was only a kid with dreams. He worked at The Gap with the tile- sales assistant.

This verse was extremely honest and it represented a working man and an average person with dreams of being successful that one day he would go back to his old job and gloat into his boss’ face. His honest experiences made the world love him and his music.

At position two is “Love lockdown.” This solo by Kanye is special in its own ways. It is recorded from this fourth studio album called “808 & Heartbreak” in 2008. Before the release of this album his fans and the world, in general, were wondering how West was going to bounce back. He had just lost his mother and breaking off from a very public engagement his mind and head were in a different place.

Everyone was glad that he did not retire and this song had a new look as well as a new sound that was completely different from anything else in the music during that time. Love Lockdown was the announcement or rather introduction to a new Ye and it ushered in another new era of music that changed hip-hop completely. This song was incredible as it won the Best Hip-hop/Rap Dance song at the International Dance Music Awards in 2009. It peaked at position three on the US Billboard Hot 100.

At the top of our list is “New God Flow.” When Kanye first performed this stunning song “New God Flow” at the BET Awards, it was clear that he is a rare gem and a performer who can absolutely own an entire television audience. When he stepped into the crowd, he rapped a Capellas version of this song while stomping his feet like inviting his audience into action.

In this song, Kanye West is featuring Pusha T, and both form an incredible collaboration. This track performed best on Canadian Hot 100 and on the US Billboard Hot 100 its effect cannot be over-emphasized. It peaked at position 89 but its content is amazing.

In conclusion, Kanye West is a legend when it comes to hip-hop and rap music. He is famous not only in America but the whole world due to his choice of words in his music and the flow. The above top ten songs by Kanye West are amazing and will prompt you to listen to more of his songs. Enjoy!