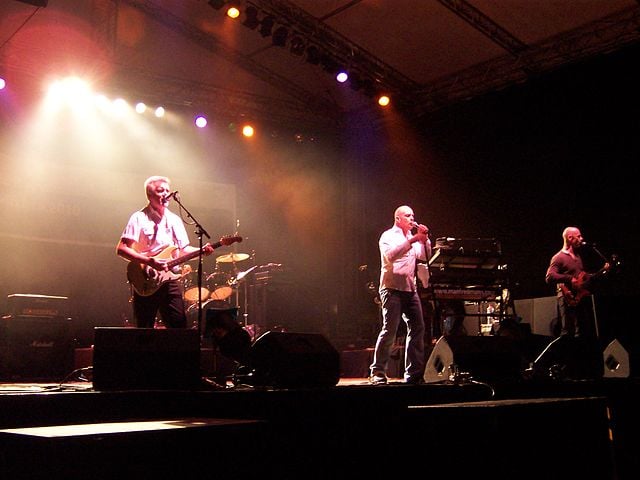 The original Manfred Mann band was formed in the early 1960s. The origins of the band began in the city of London, England. The original members of the group consisted of Manfred Mann on keyboards, Mike Hugg on drums, Tom McGuinness and Dave Richmond  on bass, Mike Vickers on guitar and Paul Jones on lead vocals.

Like The Beatles, The Rolling Stones and many other British Invasion bands, their music was released in different album variations between the United Kingdom and United States. This led to a bit of confusion in finding which albums singles were released on, or would be placed on. Most of the band’s success was in the United Kingdom. Because of their success in the U.K. we will list their albums as released in England.

We open our top 10 Manfred Mann songs list with the great track “Fox on the Run.” The song  “Fox on the Run.” was released as a single in 1968. It was a top 10 hit in seven countries. It would be the second to last top 10 hit the band would celebrate before they broke up a year later in 1969.

Continuing with our top 10 Manfred Mann songs list we take a look at one of the rare Manfred Mann hits that was written by members of the Manfred Mann band. Songwriting credit for the track “5-4-3-2-1,”  went to keyboardist Manfred Mann, drummer Mike Hugg and lead singer Paul Jones. The song “5-4-3-2-1,”  was released as a single in 1964. The song was a top 10 hit for the band peaking at number five on the U.K. music charts. It was the band’s first charting single.

Continuing with our top 10 Manfred Mann songs list we turn to their big 1967 hit “Ha! Ha! Said the Clown.” The song was released on the U.K. album Mighty Garvey and the U.S. album Mighty Quinn. The song hit number four on the U.K. music charts. It also hit number one in Austria, Germany and the Netherlands. The song failed to even reach the top 100 in the U.S.

Manfred Mann’s great cover of Bob Dylan’s “If You Gotta Go, Go Now,” was a big hit for the band. Manfred Mann’s version reached all the way to number two in the United Kingdom in 1965. In the United States, the song did not even break the top 100. Simply amazing how a song can  almost be a number one in the U.K. and not even break the top 100 in the U.S.

Manfred Mann’s great single “Come Tomorrow,” was released on the U.S. album The Five Faces Of Manfred Mann and the U.K. album Mann Made Hits. The song hit number four in the United Kingdom in 1964. This one has such an amazing soul groove.

The great song “Pretty Flamingo,” was issued as a single in 1966. Manfred Mann enjoyed great success with the song in the United Kingdom where the song hit number one on the music charts. In the United States, the song peaked at number 29 on the Billboard Hot 100. The song has been covered by many artists including some great live versions performed by Bruce Springsteen and a superb studio version recorded by Rod Stewart on his A Night on the Town album. The song “Pretty Flamingo,” was written by Mark Barkan.

Manfred Mann’s great recording of “Mighty Quinn,” was released on their final studio album entitled Mighty Garvey. Their fifth and final album was released in 1968. The song “Mighty Quinn,” was written by Bob Dylan. However, Dylan had nowhere near the success that Manfred Mann enjoyed with the song. “Mighty Quinn,” would be the final studio recording that Manfred Mann fans would hear as it appeared as the last track on their final album and it was also the band’s last single release. Bob Dylan wrote the song in 1967 but did not officially release until it was issued on his Self Portrait album in 1979. On the Self Portrait album the song was titled “Quinn the Eskimo (The Mighty Quinn).”

We close out our Top 10 Manfred Mann songs list with one of the biggest hits of the 1960s. It was very difficult to score a number one hit in the United States or the United Kingdom during the 1960s. With bands like the Beatles, The Rolling Stones and Motown and Stax Records, competition for the number one spot was fierce in both countries. Not for Manfred Mann, the band scored a number on hit with “Do Wah Diddy Diddy,” in both the United States and the United Kingdom in 1964. The song was written by Ellie Greenwich and Jeff Barry.